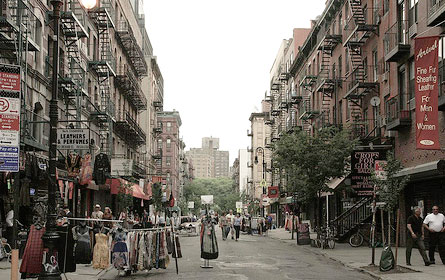 Four years ago, overdevelopment was the biggest issue in district 2 in Lower Manhattan .

Now, according to Councilmember Rosie Mendez, it still tops her agenda, and she wants to be the one to try to control it.

And she probably will be.

Mendez, who is seeking a second term in the Democratic primary on Sept. 15, is facing opposition in the form of Juan Pagan, musician and former assistant at Baruch College. Having scored several victories in her first term in City Hall, including the controversial rezoning of the East Village and the Lower East Side, Mendez is still widely popular in district 2, which includes Alphabet City, Gramercy Park, the Lower East Side and Murray Hill. 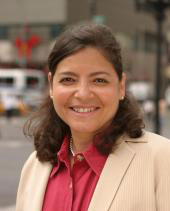 Only about three dozen people filed into Parish Hall at St. Paul's Church in the East Village, and most of them were wearing "Rosie Mendez" stickers.

As Simeon Bankoff, executive director of the Historic Districts Council introduced the candidates , the audience erupted in cheers once they heard Mendez's name.

It was obvious this was her crowd.

"During my four years, I have been a champion of preservation, which I define very broadly," Mendez said. "It's about people and structures. I have fought for tenants, preserving them to be in their homes. I have worked to landmark buildings, designate historic districts."

If re-elected, Mendez said she would continue that record. She said she would push forward a bill, which she proposed in 2007, that would help prevent buildings being considered for landmarking from being destroyed and increase communication between the Department of Buildings and the Landmarks Preservation Commission.

Mendez said she would continue to try to control development by New York University, which she called "a problem" and push for a proposal to allow the institution to expand on Governors Island instead of in her district. Mendez also said she would work to eliminate allowing architects to self-certify building applications. 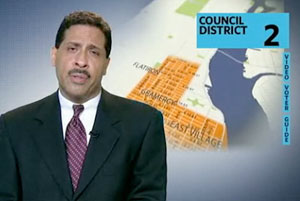 Pagan, who ran for the State Assembly in 2006, agreed with most of Mendez's agenda. He did not go as far as her on self-certification. Instead he proposes that an architect's license should be revoked if he or she fraudulently approves a construction plan. He also wants to require the city to launch web sites where residents can track development.

"They should be well informed. That way together we can the find the answers to hold these {developers} much more accountable," Pagan said.

Several times during the forum, Pagan declined to answer questions, including on the proliferation of vendors in the district, saying he had to learn more about the subject.

Pagan, a former assistant to the provost at Baruch College, said he would never tax universities, which are currently exempt, to try to curb development. Mendez said that was something she would consider.

If there was one area where the two candidates starkly disagree it would be on the use of discretionary funding, the source of a scandal at City Hall last year. Pagan said he would "never touch" the funding, which he labeled as pork.

Pagan, who has previously worked for the New York City Housing Authority managing two of its day care centers, would like to see the council's discretionary funding appropriated by a proposal process. "There has to be better control of where these dollars go," Pagan said.

Mendez vehemently disagreed. "It's not pork," Mendez countered. "It's the bread and butter of communities."

At the end of the debate, Mendez revealed below her blouse she was wearing a "Rosie the Riveter" shirt. She called out to the audience that she would continue to fight to preserve their community. And they applauded.