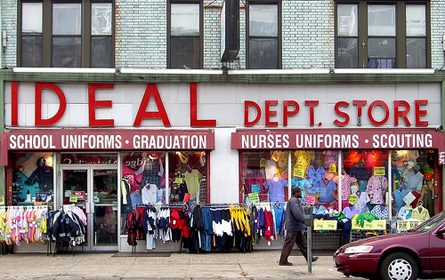 Three of the five people seeking to replace Stewart did show up, however, and they made Stewart a star of the evening. While the candidates differed on hw they would solve the problems confronting this heavily West Indian district, they all agreed that Stewart must go. Many in the audience appeared to agree.

First elected in 2001, Stewart has seen two aides, including his chief of staff, plead guilty on embezzlement charges related to the City Council slush fund scandal, though he has not been charged with any wrongdoing. A building he owns in the district has been cited for multiple violations, and earlier this year he claimed to have the endorsement of several city politicians who said they had done no such thing.

Unusually for an incumbent he has little organized support, with the New York Times, Working Families Party, Caribbean Life newspaper, Citizens Union and others all endorsing one of his opponents.

Stewart, though, has confronted tough election fights before and won. And some people at the forum Friday expressed concern that the crowded field could dilute the opposition to Stewart, taking him to victory once again.

Facing Stewart are: Dexter McKenzie, a physician who grew up in Brownsville and now is a professor at SUNY Downstate; Sam Taitt, a professor at Kingborough Community College who hosts a radio program and is making his fourth run against Stewart; Jumaane Williams, a community organizer; Erlene King, a businesswoman and activist who worked for the district's former council member, Lloyd Henry; and Ernest Emmanuel, who has previously cited his work against police brutality and has run a very low profile campaign.

With the endorsement of the Working Families Party, an array of unions, the New York Times, Citizens Union, ACORN and others, Williams makes it clear he thinks he has the best shot to beat Stewart. He cites an editorial in Everybody's, a Caribbean American magazine, which, in endorsing him said, "The majority of voters are embarrassed over Stewart’s poor and questionable leadership and they are supporting 'any other candidate.' But voting for 'any other candidate; is exactly what Stewart wants; he hopes the other candidates will divide the vote. To avoid this disaster, voters must vote for the candidate who is most likely to defeat Stewart -- Jumaane Williams."

Williams said that candidates often get "a false idea" that they can win. But he said, "I'm a realist. The one thing I would hate is if the incumbent slips back in."

Taitt and McKenzie, though, said they deserved to be on the ballot.

Conceding he did not have much union backing, Taitt said, "These unions do not represent our district. ... These external forces should not be making the decisions for our district."

"We're still living in a democracy where people have the power to make decisions," McKenzie said. Noting that only about 8,000 people vote for council in an area with 65,000 registered voters, he continued, "We should be asking the public why aren't they voting, not why should we limit the choices."

King said she has been hard-pressed to get her message out because of ballot challenges from Williams that had her temporarily off the ballot. Although back on, she said, "I haven't been able to campaign because I've been going back and forth to court." She thinks her record and her status as the only woman in the race would have given her a good shot at victory.

For his part, Stewart cites his record, which he says entitles him to another term on the City Council. A podiatrist from St. Vincents, he portrays himself as "Brooklyn's Renaissance man" and in this largely immigrant district points to his chairmanship of the council's Immigration Committee. In particular, his campaign literature credits him with the building of a mall at The Junction at Flatbush and Nostrand Avenues, of helping to reform the Flatbush Business Improvement District and improving schools and services to seniors.

In statements, he has rebuffed many of the charges against him.

After being challenged on claiming endorsements he did not have, for example, he said, "In the final analysis, this election is not about who endorsed or who did not endorse me. ... These petty distractions are simply attempts to subvert the will of the people and install by coercion, character assassination and political innuendo someone who does not know the district or its people."

A leaflet handed out at the forum Friday still listed the questionable endorsements, including that of Councilmember Rosie Mendez, who after hearing that Stewart had erroneously claimed her backing, threw her support to Williams, and of seven other politicians who also told the Daily News they had not endorsed Stewart.

While some in the district question how he could not have known that his chief of staff was taking money -- "you think you would demand an accounting," Greene, for one, said -- Stewart has dismissed these concerns.

Responding to Williams' calls for him to step down, Stewart said, "He may not understand that, in government, you serve the people. Just because I have been associated with people that may have done something, I’m not responsible for the [community organization which received the money], which are not part of my office.

In addition, Stewart has survived tough battles before. In 2005, Taitt picked up a number of endorsements but lost to Stewart. In 2003, the condition of Stewarts buildings emerged as an issue and Stewart blamed the problem on his tenants, telling a reporter, "It's a cultural thing. The Haitian folks, because of their poverty, will have five to eight people living in an apartment, and they will break the locks if one doesn't have a key." Despite the furor over the remarks and lead paint violations in the apartments, Stewart won re-election.

Williams stresses his background as an organizer, citing the work he has done on housing and other issues and saying, as a council member, he would use those organizing skills to approach many of the district's problems. He said he has worked throughout the district and written grants that brought millions of dollars onto the community.

Taitt, touting his involvement in the community, has pushed hard for a credit union in the area which, he said, "will bring hundreds of thousands" of dollars to the community and boost business in the district. He has tried to minimize Williams' experience, "The election is not about community organizing," he said. "The election is about the serious problems we face today."

Taitt also said that Williams is a newcomer to the district, having moved there to run for the council seat. Williams repeatedly denied this, saying he has lived and worked in the district for more than 15 years.

McKenzie cites his own experiences, growing up poor and eventually becoming a doctor, as an example of how people can pull themselves up. "We are setting ourselves up not as an exception but as an example of what this community can produce." he said.

To address the community's problems, he said, "We're going to have to buckle down and examine the problem at their root," he said, adding a favorite phrase: "no quick fixes."

Unemployment is so high in the area, according to McKenzie, because "a large and burgeoning number of students are unemployable." He called for building job training centers as well as shopping malls. "Not just consumption, production," he said.

Williams agreed there would be no quick fixes to the unemployment problem in the district. But, he continued, "The next wave of jobs is going to be environmental. ... We have to train young people for environmental jobs."

Taitt advocates a partnership between small businesses and schools. "We do not have a business culture in our community," he said, pointing at a need to prepare young people to own businesses.

Not all small businesses are equally desirable, though. Responding to an audience question, the candidates split over the desirability of nightclubs and bars in the district. While saying zoning rules should be enforced, McKenzie thought the cubs reflected "a rich culture that could be marketed."

Taitt, though, lashed out at "owners of these clubs who do not live in the district and sit in their homes at bight and sleep when residents of this district cannot."

While urging stricter laws, Williams said that pressure had to be out on the police to enforce the ones that do exist. He urged residents to call the police and get their neighbors to call the precinct -- not 311 -- as well.

With the campaign in its final hours, some involved tend to be wary. Taitt said that in the closing days of the 2005 primary campaign, leaflets went out around the neighborhood saying, "Don't vote for Sam Taitt. He's gay." At the forum, Taitt said he is not gay but added, "If anyone wants to come out with other lies about me between now and Election Day, they can do so."