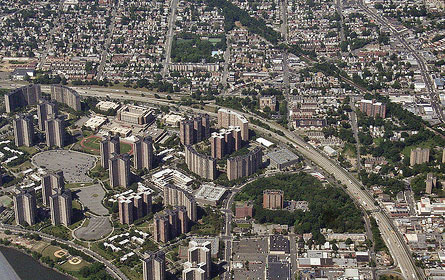 He says he’s upgraded district 12’s school libraries and brought computers and a new playground to P.S. 78 and an elevator to P.S. 113.

“The biggest accomplishment is providing services to the district that are so desperately needed in terms of education,” said Seabrook, sitting behind the dias at last week’s zoning meeting. “We have put computers and lap tops and smart boards in all of the schools.”

But this list hasn’t prevented two challengers from mounting campaigns against him -â€“ spurred, they say, by questionable appropriations by the incumbent and a lack of commitment to the community. Tomorrow Seabrook, who was elected to the City Council in 2001 and served in both the State Assembly and State Senate before that, will face off against Jerome Rice, a former corrections officer turned civil rights activist, and Andy King, the founder of the Bronx Youth Empowerment Program and an organizer for SEIU.

Despite Seabrook’s long record of public service, his challengers say the district, which includes Edenwald, Co-Op City, Wakefield, Williamsbridge and Baychester, is fragmented and neglected. King, who is mounting the most aggressive challenge, says he would work to unify the community, while Rice says he wouldn’t have to do much to be an improvement over the incumbent.

“All I have to do is my job, and that’s a whole lot more than what the councilman is doing now,” said Rice â€“- a large man with the build of a linebacker. “He’s currently doing nothing.”

Seabrook’s second term in the City Council hasn’t been an easy ride. Following the council’s slush fund scandal, Seabrook has been the subject of intense examination by the press.

The New York Times found that an organization Seabrook incorporated and is closely tied to, the African-American Bronx Unity Day Parade, received inflated payments from the city. Seabrook has been charged with nepotism, and his attendance record -â€“ just over 73 percent -- is one of the lowest of the council’s 51 members.

When asked about these claims, Seabrook says, “I don’t have any response to it other than the service [I’ve provided] in the community. I haven’t heard anything from my community responding to it.”

To a certain extent, Seabrook is right. The councilmember has pretty much secured every important endorsement in the race. He has gleaned the support of the Bronx Democratic Party, District Council 37, the United Federation of Teachers and former Mayor David Dinkins. His most formidable opponent, King, was not able to get the endorsement of SEIU, which he organizes for. The service employees went for Seabrook.

With another term, Seabrook says he would focus on upgrading the districts school facilities and work to get job placement programs.

“They want to make sure we have educational programs that take our children in to the 21st century â€¦ job programs,” Seabrook said of his constituents. “That’s what the people in my community are talking about. My opponents, I don’t know what they’re talking about.”

For the most part, Rice, who works with the civil rights group, Blacks in Law Enforcement Alliance, talks about Seabrook. During a recent debate at Bronxnet, the county’s public access channel, Rice dug into Seabrook’s record â€“- which he says doesn’t amount to much. He criticized the incumbent for not taking part in the debate as well.

Seabrook said he had a scheduling conflict and was not avoiding the debate.

Beyond that, Rice said his first priority if elected to the City Council would be to close the communication gap between the community and the police.

Rice also said he would introduce legislation that would take the Civilian Complaint Review Board out from under the jurisdiction of the Police Department and put it under the borough district attorneys’ offices. Police should not be in charge of punishing their own misconduct, he said.

King, a soft-spoken former case worker for District Council 37, said his first priority would be to engage the community and keep them informed. He also said one of his top priorities would be to make the district once again affordable and conducive to working families.

“If you go down White Plains Road, I wouldn’t say it’s deplorable, but it’s conducive to crime,” King said. “We need to create an environment that shows that people are living here and that people want to be engaged.”

King is proposing to introduce what he calls the “New York City Worker Housing Act,” which would allow any city employee to live in any borough with a stabilized rent. He also wants to create an independent finance office for the City Council, which would track funding and ensure services are actually delivered.

Drawing his inspiration from President Barack Obama, King says he will bring “change” to district 12.

“The name and the choice for change is Andy King,” he says.

Whoever wins tomorrow’s primary will face off against Joseph Sauerzopf, a Conservative, and Martin Badonsky, a Republican, this fall. Because the district is heavily Democratic, the primary is a good indication of who will win in the general election. Sebastian Ulanga will appear on tomorrow’s ballot, but he has dropped out of the race.