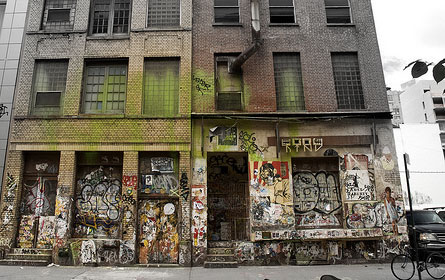 You want graffiti erased from your storefront?

The City Council on Wednesday approved legislation to make it easier for residents and business owners to have graffiti removed from their properties -â€“ gratis -- by the city.

In addition, the council approved a 128-block rezoning of the Sunset Park section of Brooklyn.

In order to remove graffiti from private property now, the city must obtain a waiver from the property owner.

Under the legislation (Intro 1042), which was approved by a vote of 44 to 2, the city will paint over graffiti unless the owner objects â€“- essentially reversing the current practice. Anyone who wants to keep the graffiti on the property must alert the city within 35 days.

“This system now will help the majority of the property owners in the city of New York get graffiti removed from their property free of charge, but it gives those New Yorkers, who for whatever reason want to keep the graffiti on their property, the option of keeping it on their property,” said Council Speaker Christine Quinn.

Owners who get a letter from the city alerting them to graffiti and who do not respond would effectively be giving the city the go-ahead to clean it up. This way, said Councilmember Gale Brewer, who sponsored the bill, the city can clean up graffiti quickly and more efficiently by painting blocks at a time.

Nestled between Park Slope and Bay Ridge, Sunset Park has been the home of row houses, a large Hispanic population and what many call “Brooklyn’s Chinatown.”

Sprinkled with industry, like the Brooklyn Army Terminal, the neighborhood started to feel pressure from developers once its surrounding communities were rezoned to prevent overdevelopment, said Councilmember Sara Gonzalez, who represents the area.

Under the existing zoning, according to the City Council, there was no limit on building heights in much of the neighborhood. Under the new zoning approved by the City Council by a vote of 44 to 2, buildings would be limited to about five or six stories along streets and six to seven stories along portions of Fifth Avenue and all of Sixth Avenue. Councilmembers Charles Barron and Tony Avella voted against the rezoning.

The rezoning also includes an inclusionary housing option, which would allow developers to build larger buildings if they provide affordable housing.

Despite the current limitations, or lack thereof, the rezoning has been controversial. Residents claim it will lead to large luxury developments, which promise to displace the area's lower-income residents and small businesses.

“Community Board 7 passed this unanimously. The borough president has given his stamp of approval,” said Gonzalez. “This plan is the community's plan.”

Schools and the MTA Communicate

The council also unanimously approved legislation (Intro 951-A) that requires the Department of Education to file student enrollment information with the Metropolitan Transportation Authority so the authority can better utilize its bus routes.