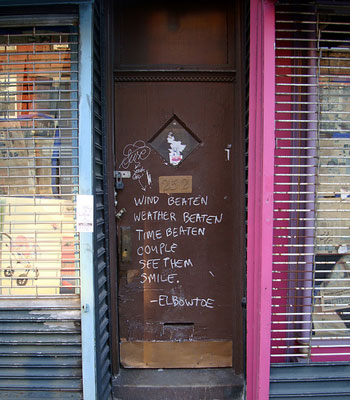 Window shoppers and graffiti artists have been put on alert.

After July 2011, no business owner can purchase an opaque, security grill in the five boroughs and will have to opt for transparent security gates instead. By 2026, all businesses will have to comply with the new gates. Approved by the City Council on Monday, the ban, which has been nearly four years in the making, will deter vandalism and allow passersby to window shop all night long, according to the bill's supporters.

Also on Monday, the council approved legislation that requires abatement and demolition procedures be conducted separately -- the council's final response to the Deutsche Bank fire in 2007.

Flash forward to 2026, said the bill's (Intro 138-A) sponsor Peter Vallone Jr. of Queens, and not a single opaque grill will exist in the five boroughs. The security devices normally seen barricading small businesses, including pharmacies, pet stores and boutiques, will be extinct.

In their place will be openwork gates less vulnerable to the blast of a spray paint can. The gates typically cost approximately $400 more than an opaque version, said council officials.

Under the legislation, any business replacing a security gate after July 2011 must install one that leaves more than 70 percent of the area visible. The regulation will apply to thousands of small businesses throughout the city, including banks, beauty salons, copy shops, retail stores and department stores. The bill was approved by a vote of 45 to 0 with one abstention from newly minted Councilmember Ydanis Rodriguez.

"Our streets will no longer look like a graffiti strewn war zone after closing time," said Vallone, who initially proposed the bill to take effect immediately. It was revised to address the financial burden put on small businesses, said officials.

To ensure business owners are aware of the new regulations, the Department of Buildings, which will oversee the law's implementation, must institute an outreach campaign in coordination with other city agencies.

If business owners do not comply, they will be fined $250 for the first violation and no more than $1,000 for each subsequent violation.

The Deutsche Bank fire of 2007, which killed two firefighters, may have been started by a cigarette.

But the City Council is not taking any chances.

That's why the council approved a bill Monday (Intro 998-A) that would ban the simultaneous demolition of a building and abatement to remove immediate hazards at the site -- the circumstances surrounding the Deutsche Bank blaze. In buildings where abatement is considered an emergency and a necessity, the city's Department of Environmental Protection can issue a waiver.

"Until this bill gets passed, you were allowed, almost as a matter of course, to do demolition and asbestos abatement at the same time," said Council Speaker Christine Quinn. "We are now saying the standard is, 'No, you can't do them both at the same time.'"

Quinn said the two practices are inherently a safety hazard. Abatement often entails plastic sheeting, which is combustible, over contaminated spaces, while demolition often includes the use of hot tools.

The bill is the last in a package that was approved in response to the Deutsche Bank fire. Other bills include requirements for color-coding standpipe and sprinkler systems and air pressurized systems, which ensure standpipes are not inadvertantly dismantled.

This bill was approved by a vote of 45 to 0 with one abstention from Rodriquez.

The council also passed legislation (Intro 935) which will require property owners whose buildings are at risk of backflow -- the process where water in a plumbing system flows in the wrong direction, effectively sending used water back into peoples' faucets -- to verify with the Department of Environmental Protection that they have installed backflow prevention devices.

Backflow can occur, said council officials, when water pressures are different inside and outside of the building. Such pressure differences can be caused by elevation or boilers as well as improper plumbing connections, and they can result in the contamination of the building's water supply.

Similar legislation exists on the state level, said Councilmember Jim Gennaro, the bill's main sponsor, but it has received lax enforcement. The city's bill will require certified professionals to submit plans proving backflow prevention has been installed and is up to agency standards.