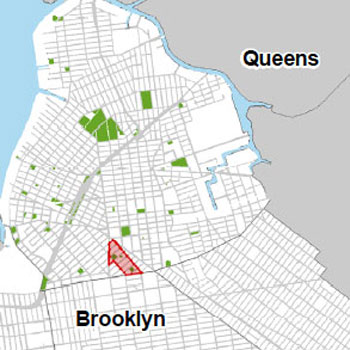 Photo from Department of Housing Preservation and Development

The City Council approved the rezoning of a 31-acre swath of northern Brooklyn known as the Broadway Triangle yesterday -- approving a project that critics charge is politically motivated and doesn't adequately address the area's affordable housing needs.

The triangle, which straddles Williamsburg, Bedford-Stuyvesant and Bushwick, was zoned for industrial use 20 years ago, but no development ever occurred there. Today, the area stands largely vacant. The council's move will morph the area into mostly residences, which administration officials say could spur the creation of more than 1,800 homes, 46 percent of which would be defined as affordable.

But at City Hall yesterday, the Broadway Triangle quickly became not only the intersection of three rapidly changing neighborhoods in Brooklyn. It also symbolized the collision of two Brooklyn political factions: Those who have voiced their support for Democratic county leader, Assemblymember Vito Lopez, and another community-based faction that has sided with Councilmember Diana Reyna. Reyna's district abuts the project, and she ran for re-election this fall primarily on her opposition to it.

On the steps of City Hall yesterday, scores of area residents aligned with Lopez rallied in favor of the project. "Vote yes," they cheered, while waving signs championing the creation of affordable housing. Inside, another set of community members, who were fewer in number, lauded a lawsuit against the project to be filed as soon as the council voted.

The project was approved by a vote of 36 to 10 with four abstentions.

The dispute revolves in part around an organization founded by Lopez, the Ridgewood Bushwick Senior Citizens Council. The senior citizens council, in coordination with a local Hasidic group, United Jewish Organizations, was given first dibs for developing several parcels of city-owned land within the rezoned area, say opponents. Critics charge the city gave these groups priority over the desires of the community. Instead, they say, the city should have conducted a competitive process to determine who would develop part of the land.

The deal approved yesterday was a "political contract" and would only create "a ghetto," Reyna said. "This plan had no open process, no participatory process," she said. "It was exclusive to two organizations."

Councilmember David Yassky, who represents the area, favors the project.

"This has been part of the city that was poorly treated by the city," said Yassky. "There remains a desperate need for moderate priced housing and low-income housing that this project will bring."

The Broadway Triangle Community Coalition, the group fighting the plan, put forth its own proposal earlier this year. It advocated for doubling the amount of residences in the project by increasing small, lower-scale buildings into residential towers. That plan was never considered.

Yesterday, according to coalition member Shekar Krishnan, the coalition filed a lawsuit against the city, claiming the Broadway Triangle plan violated residents' constitutional rights by giving a certain ethnic group a priority.

Much of the affordable housing, opponents also say, is not mandatory, but it is part of the city's inclusionary housing program.

In addition to the affordable housing, the development will create 103,536 square feet of additional retail space and 25,856 square feet of community facility space, according to the Department of City Planning.

In response to the council's approval, Mayor Michael Bloomberg said in a prepared statement: "When the Broadway Triangle Urban Renewal Area was created 20 years ago, the goal was to promote new industrial and residential development in a largely vacant area that had badly deteriorated. Unfortunately, much of the industrial development never occurred and the Broadway Triangle stagnated. Today, we’ve re-imagined what the area could and should be, and the re-zoning passed by the City Council will transform a largely vacant and underutilized area into a thriving new neighborhood."

In addition to the Broadway Triangle, the City Council also approved the rezoning of a 13-acre portion of the West Side rail yards -- the area that would have hosted a West Side Stadium in Manhattan.

The rezoning will transform an area once thought of as being for the Jets into a neighborhood, said Council Speaker Christine Quinn, who represents the area.

"There have been a lot of plans for what would happen to the western rail yards," said Quinn. "Today we moved beyond plans and hope and thoughts. We moved to actually approved zoning."

The 13-acre area, which will developed by the Related Companies, will include 20 percent affordable housing, which will vary from low to moderate incomes. The new neighborhood, a high-rise residential and business district, will have about 5,000 new units of housing. It will include 16,000 square feet of cultural space and new green space on land currently owned by the Department of Environmental Protection.

The rezoning was approved by a vote of 47 to 2 with council members Charles Barron and Vincent Ignizio dissenting. Councilmember Melinda Katz abstained.

In a vote of 41 to 7 with two abstentions, the City Council approved a pro-forma street-naming bill (Intro 1103-A) which gives Liverpool Street, between 94th Avenue and 101st Street in Queens, the title of Sean Bell Way. Bell was fatally shot by police on Liverpool Street in 2006 after leaving a nightclub on the day of his wedding.

As the Bells sat in the council chamber, council members debated the ethics of naming the street after their lost son. Some, including Councilmember Peter Vallone Jr., argued it did not commemorate a positive moment in New York history. Others said the council should get out of the business of street naming altogether.

Ultimately, those in favor of the designation won with many saying a person's life should not be the only thing remembered by a street naming, but also a person's death.

Veto Override of Kingsbridge and Parking

As expected, the City Council once again rejected the Kingsbridge Armory project after Bloomberg vetoed their disapproval. The vote, which was 48 to 1 with Councilmember Helen Sears voting no, officially kills the project, which would have turned the Bronx's Kingsbridge Armory into a mall.

The council also overrode the mayor's veto of a bill (Intro 907) that gives a five-minute grace period for alternate side parking and another bill (Intro 662) that allows clergy from out of state to receive parking permits.

The bill also will give the Department of Consumer Affairs the authority to shut down stores for five days if they are repeat offenders. It only applies to toy guns that have a striking resemblance to the real thing.

The council also approved legislation (Intro 853) streamlining the city's arcade permit process by exempting establishments with less than nine arcade games from having to get a permit.

Current law requires businesses with more than five video games to get a permit. The bill will also require arcades to post signs stating anyone under the age of 18 cannot enter between the hours of 9 a.m. and 3 p.m.