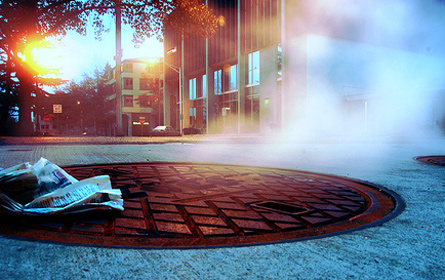 Every year, tens of thousands of New Yorkers do not show up in court to contest suits against them -- simply because they never received the papers alerting them of the action. By the time they do find out, their bank accounts could have been frozen or their wages garnisheed.

According to advocacy groups and some member of City Council, many process servers do not take adequate steps to ensure those charged receive their court papers. Yesterday City Council enacted a bill with several measures it said would remedy that.

Also at its stated meeting, the council approved bills to help public school students get library cards and to aid those children in the foster care system who also are undocumented immigrants get legal residency in the United States. In other action, the council passed its own budget for the coming fiscal year and approved a former member -- David Yassky -- as taxi and limousine commissioner.

In 2008, more than 200,000 consumer cases in civil court in New York resulted in default judgments, meaning the plaintiff never appeared. MFY Legal Services and other groups have discovered that, in many cases, the person had not received notification of the action. The process servers couldn’t find the person, made little effort to do so or even threw the document away, sparking some to refer to this kind of paper serving as "sewer service."

"The very foundation of our legal system is the right to defend yourself," said City Councilmember Daniel Garodnick, the bill's sponsor, but the "sewer service" deprives people of that right. According to Garodnick, a study by MFY looked at 350 cases where client were to be served with papers for debt collection. Not a single one was served properly.

Jackie Neal, a Brooklyn woman who was on hand before the council meeting, said she went to the bank to use her debit card and was denied the money. She eventually found out, she said, that "a company I had never heard of had won a judgment against me." With the help of legal services, it took her eight weeks to correct the matter. "Checks bounced. I missed days at work trying to resolve it legally," she said.

The bill (Intro 6-A) would require process servers pass a test, keep records of papers served for seven years, and either post a bond or pay into a fund to cover unpaid fines. In addition, the server would have to use some kind of global positioning device that would record the time, date and location when he or she served papers. The latter was apparently prompted at least partly by one server who reportedly claimed to have delivered papers to 77 people over an area of 400 miles in a single day.

The companies employing the servers also would have to meet new requirements including informing all of their employees of their rights and responsibilities as process services.

City Councilmember Oliver Koppell objected to requirement that servers post bond. "Requiring businesses to get bonds is often a barrier to their doing business," he said.

All other 45 members at the meeting voted in favor.

Undocumented immigrant children in foster care qualify for a special immigration juvenile status from the federal government that could help them obtain legal residency and a green card.

Despite that, according to City Council Speaker Christine Quinn, the city's Adminstration for Children's Services has "no dedicated plan or policy" to support these children or to make sure they get help. In fact, Quinn said, the administration does not even know how many children in the foster system might qualify for the special status. The council has estimated a number in the hundreds.

Intro 3-A, sponsored by Councilmember Daniel Dromm, directs children's services to identify children who might qualify, track them until they obtain special status or some other immigration help, assist them in getting their status, and provide training on immigration benefits to its case workers. Children's Services also would have to report to City Council on its efforts.

Dromm said, in a statement, that the bill aims to help "ensure that children who qualify are given the opportunities they deserve, including the ability to be put on a path toward citizenship."

While praising that "noble purpose," Councilmember Peter Vallone said the bill comes as the Administration for Children's Services faces budget cuts, making this a bad time to ask the agency to do more. He abstained.

Councilmember Daniel Halloran said he shared that concern and worried that,a year from now, council might find that "work that should be getting done by ACS may not be because of this mandate." He voted in favor, however.

The vote was 45 in favor with the one abstention.

The council unanimously approved a $52.9 million internal operating budget for the coming fiscal year. That represents a 4.6 percent increase for this year, although, according to Quinn, the council had previously cut its budget by $3 million and reduced its staff by 30.

Quinn attributed the rise this year to cost of living increases for council employees. Noting that other city employees had received these raises, Quinn said, "I think it would be inappropriate for the City Council to be the only entity in the City of New York not to take these increases."

If the budget picture gets even worse, she said, council would re-examine its budget. This money does not include member items, which are allocated later in the budget season.

The council unanimously approved a bill (Intro 59-A) proposed by Councilmember James Van Bramer that would provide library cards applications and information on the libraries to all public school student entering kindergarten and sixth and ninth grade. Council members said the Department of Education had informed them the applications could be provided at virtually no additional cost to the school system.

With lots of congratulations, the council approved Mayor Michael Bloomberg's nomination of Yassky to head the Taxi and Limousine Commission.

The only complaint -- and an abstention -- came from Councilmember Charles Barron. Noting that Yassky had backed the mayor's successful bid to overturn term limits in 2008, Barron said, "We have to be cautious of any appearance or perception of the mayor rewarding people who support him."

Other members praised Yassky, who left the council to make an unsuccessful bid for city comptroller, for pushing for hybrid taxis while on the council. Naming him to the post, Councilmember Lewis Fidler said, was putting "a round peg in a round hole."

Several members said they hoped Yassky would address problems in the taxi system including any reluctance by some drivers to pick up black passengers or to service some sections of the city. "Now we know who to call when we can't get a cab to take us home from Manhattan to Brooklyn on a Saturday night," said Councilmember Stephen Levin.