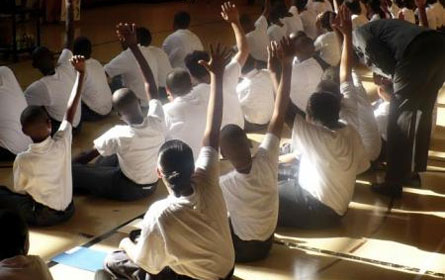 Democracy Prep
The rapid expansion of charter schools, such as Democracy Prep in Harlem, has fueled the race between incumbent State Sen. Bill Perkins and challenger Basil Smikle.

Jay Seales' son is only 4 years old, but Seales already worries about whether the boy will get into one of Harlem's popular charter schools. That, says Seales, is one reason he is out at the corner of 116th Street and Lenox Avenue early one recent morning handing out leaflets for State Senate candidate Basil Smikle, who stands, reaching out for hurried commuters' hands, only a few yards away.

Smikle, a political consultant, needs lots of voters like Seales if he is to confound the odds and defeat incumbent State Sen. Bill Perkins, a longtime mainstay of Harlem politics, in the Sept. 14 primary.

"I want a change in Harlem, and Bill Perkins has been in for a long time," Seales explains.

But Ronnie Holly, a longtime party activist leafleting for U.S. Rep. Charles Rangel, sees it differently. Perkins, he said, "is going to win" and, so Holly said, is Rangel.

While Perkins and Smikle represent contrasts on a variety of fronts, charter schools helped create this contest and have continued to dominate and to a great extent fund it. (The race is one of several this year where charter schools have become a major issue, generating money and debate.)

Publicly funded, privately run charter schools have burst into upper Manhattan in the past five years, attracting lots of students and creating controversy in the process. As parents have clamored to put their children in charters, Perkins has relentlessly questioned the performance of many of the schools and the way they operate.

The concentration of charters in black and Latino neighborhood such as Harlem, he has said, has created an education system that is "separate and unequal." He has argued that many of the individuals and organizations that run the schools "have not been accountable in terms of the success they are achieving and in delivering services to all children."

Perkins held hearings on charters last spring that many proponents of the schools viewwed as hostile. And he initially opposed raising the cap on the number of charters in the state, changing his mind, he has said, only when provisions were added establishing more oversight of the schools.

Despite this, Perkins has said, he does not oppose charter schools. In fact, he served on the board of one.

Charter proponents take a different view. Early in 2010, a number of people considered challenging Perkins, at least partly on the charter school issue. Eventually they coalesced behind Smikle.

Since then, Smikle, who has raised about $160,000, has received contributions from many of those supporting the charter school movement. Perkins notes that many of these contirbutors work in highly paid jobs on Wall Street, which has become a center of support for charter schools, Democrats for Education Reform, a leading pro charter group, placed Smikle on its "hot List for fall 2010," of candidates throughout the country. "Basil is taking on Sen. Bill Perkins, who volunteered to become New York’s poster child for charter school opposition," the group said in a recent report. "A Smikle win sends a strong proâ€reform message at a crucial juncture in Albany."

The organization "connected him with people in the financial and real estate world who give to charters," WNYC reporterd recently.

Smikle also has received money from people in the real estate industry.

Perkins, who has been soliciting money for a longer time than Smikle has, has raised more: a total of about $260,000. He too has seen his stand on charters bring him contributions, most notably from the United Federation of Teachers and its allies. The union went to court in an effort to remove the $6,000 limit on the amount its political action committee could give Perkins. A federal judge rejected that demand. Other unions also have donated to Perkins' campaign.

Specifically, Smikle said he supports charter schools, but that efforts must be made to improve education for the vast majority of children who do not attend them. To do that, he would look to create partnerships and follow charter schools' example of making five to six adults responsible for every child. "What happens at home affects what happens in school," he said.

In explaining his stand on charters, Perkins also focused on the kids who do not attend them. Charters he said, launched "with the promise that they could teach us how to better teach children -- not just in charters but throughout the system," he said. But years later, he continued, "we haven’t seen that replication of success. What we have seen is a proliferation of charter schools."

He said his criticism of charter school has led to changes, including allowing the state comptroller to audit charter schools and a ban on for-profit companies creating charters. "It is contrary to our values that you have private companies running public schools," Perkins said.

Beyond charters, Perkins has long been a critic of mayoral control of schools because "our system of checks and balances is compromised." 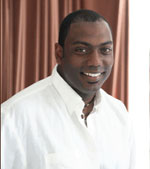 For his part, Smikle praises Mayor Michael Bloomberg for bringing accountability to the city's school system and for getting private individuals and groups to donate money to the public schools.

Despite that, he said, the schools still need improvement. "There are a lot of young people who are not being trained appropriately to compete in the global marketplace," Smikle said.

As the campaign draws to a finish, both men say the issues go beyond charter schools to include the economy, development and what type of leader can best represent the people of this rapidly changing part of New York.

Perkins, 61, portrays himself as someone who grew up in the civil rights movement and has years of activism promoting progressive causes behind him.

He has served in the Senate for only one term -- he was elected to David Paterson's old seat, which Paterson gave up to become lieutenant governor -- but previously was in City Council and ran unsuccessfully for borough president. Even Smikle praises the work Perkins did as a City Council member to fight lead paint poisoning.

Smikle, 38, presents himself as representing change. He casts himself as part of a "new generation of political leadership that doesn't come from the clubhouse ... [and is] a little more results orient, a little more policy oriented."

This new generation, he said, needs to begin assuming office now. "Right now I can make a difference," Smikle said. "I'm not going to submit to the paradigm of 'wait your turn.'"

Smikle runs his own political consulting and public relations firm and has worked for politicians, including Hillary Clinton, Bloomberg and Connecticut Sen. Joseph Lieberman.

He says that these politicians -- most notably Clinton -- would shape the way he would operate as a senator. "I learned if you want to make an investment in the future, you have to bring everyone to the table," he said. "Hilary Clinton did that."

Like seemingly every candidate this year -- no matter how entrenched in the establishment- Perkins and Smikle both see problems in Albany but think they can work to fix them.

While Perkins thought he knew how bad things were in Albany before he went there in 2007, he said it has been more dysfunctional than he expected, particularly with the 2009 Senate coup and the quick fall of the last two governors. "To be honest, I was a little bit dazed," Perkins said."

He thinks thing have improved recently, with a change in Senate leadership and the removal of State Sen. Hiram Monserrate. And he thinks things could improve further if Democrats pick up additional seats in November.

Among other measures, Perkins said he has been working with fellow Manhattan State Sen. Liz Krueger to come up with ways to change the budget process. For example, he said, the state could benefit from having an Independent Budget Office such as the city has.

He also thinks the state needs to reform the way it draws legislative districts. The key, he said, "is to assure the public we're not doing this in the closet."

But Smikle contends Perkins is part of the problem in the capital, not the solution. He said Perkins voted for State Sen. Pedro Espada as Senate majority leader and has sent out four mailings, paid for by the state, in six months.

"When you have people that are in office that aren't afraid of losing their seat but are up there to do things that are innovative," Smikle said, "I think you can make a difference."

Perhaps oddly for someone styling himself as an insurgent Smikle points to longtime politicians who have been able to legislate and get things done: Assemblymember and Manhattan Democratic party leader Keith Wright (whose Democratic cub endorsed Smikle) and Charles Rangel. He praises both as legislators -- something, he says, Perkins is not.

In addition to winning support from most -- though not all -- unions, Perkins has gotten thumbs up from some who profess skepticism of Albany's incumbents such as Citizens Union and the New York Times. The News backed Smikle.

Smikle, though, said endorsements tend to go to the incumbent. After a morning of shaking hands at the subway, he said thing are going well.

"We've changed the conversation in Harlem and Upper Manhattan, Smikle said in assessing his campaign. "We've really been able to show people you can run against an incumbent and be successful."

The question, facing Smikle is whether he can be successful enough.