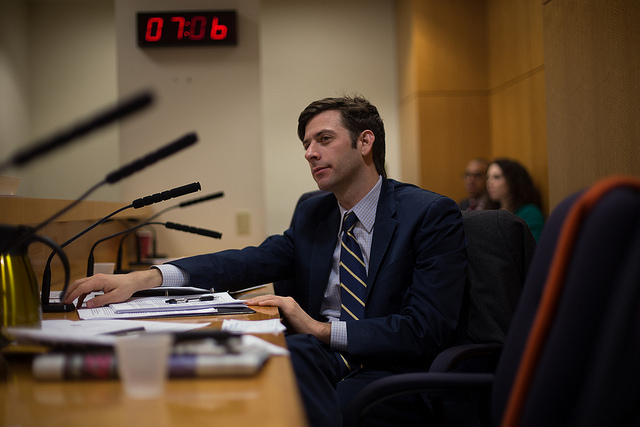 Though a great deal of political controversy has surrounded the issue lately, City Council Member Stephen Levin, chair of the committee, is not interested in adding to it.

“Now is an appropriate time to do a clear-eyed assessment of what is happening on the ground and what the plans are moving forward to address all of those issues,” Levin told Gotham Gazette ahead of the hearing. “So,” he said, the hearing will be about “toning down the rhetoric and really examining what the reality is.”

That assessment will include, Levin added, examining the Department of Homeless Services’ Living in Communities (LINC) and Special Exit and Prevention Supplement (SEPS) programs, as well as recent increases in its legal services and the Homebase program, among other components of the city’s multi-pronged effort to address homelessness.

As of its December 3 census, the Department of Homeless Services counted 57,967 people sleeping in shelters. It is estimated that there are a few thousand more who live on the streets and in subway stations. The city’s efforts to move people living on the street - who often suffer from mental illness - into shelter and reduce the shelter census have come under increasing scrutiny over the past six months.

“Even though the city has spent hundreds of millions of dollars confronting homelessness, the problem has proven to be far more intractable than everyone originally thought, including the mayor,” City Council Member Ritchie Torres, a member of the general welfare committee, told Gotham Gazette. “And it’s not for a lack of effort at all.”

During a recent interview with PIX11, DHS Commissioner Gilbert Taylor agreed - when asked to grade the administration’s work, Taylor said, “I would definitely give us an A for effort.”

Perhaps “effort” is not one of them, but there are a variety of questions around the administration’s approach to homelessness, mostly about the effectiveness of programs and policies and if the right overall approach is in place.

The PIX11 Taylor interview grew tense when the commissioner was asked to explain the increase in average time that homeless families spend in shelters - seventeen months in fiscal year 2015 compared to eleven months in 2011. The commissioner questioned the source of the reporter’s data, but when he learned it was the Mayor’s Management Report, he shifted to deny “the notion of families languishing in shelter” but said that he did not “refute” MMR numbers.

When PIX11 interviewed New York City Comptroller Scott Stringer about two weeks later, on Dec. 3, he said that his office is currently auditing DHS. Stringer said that his “early call is we shouldn’t be about spinning and grading, we should be about getting the work done.” Previously, Stringer has criticized the administration for conditions at homeless shelters.

Taylor is expected to testify at the City Council’s hearing on Wednesday. DHS did not make Taylor available for an interview for this article.

Mayor Bill de Blasio has recently acknowledged how tough the fight to reduce homelessness has been and also said he hasn’t done a good enough job explaining all of the work his administration is doing to combat homelessness. The administration has a variety of programs in motion, and has moved tens of thousands out of shelter and into housing, while also providing subsidies to help people avoid losing their homes. But, de Blasio has said that as quickly as his administration is moving people out of shelter, others are becoming in need, largely due to the city’s affordable housing crisis.

In a statement, de Blasio said that his “administration is making unprecedented investments in programs to prevent and reduce homelessness...But as rents are skyrocketing and wages remain stagnant, too many New Yorkers are struggling to make ends meet and still end up in shelter, and we are aggressively working to help these families and individuals exit shelter.”

Sixty-two percent of New Yorkers disapprove of how the mayor is handling homelessness, according to a Siena College/New York Times poll released Nov. 17.

The city’s efforts to reduce homelessness are being further enhanced, according to a recent announcement by de Blasio, sure to be part of the discussion at Wednesday’s Council hearing. On Nov. 18, de Blasio announced his administration’s new supportive housing plan, a $2.6 billion initiative to build permanent residential units for homeless individuals afflicted by complex challenges like domestic violence, substance addiction, and mental illness. The plan outlines the construction of 15,000 supportive housing units over a 15-year period. Roughly 7,500 of the units will be newly constructed and the other roughly 7,500 will be at scattered sites.

While many praised the mayor’s new supportive housing program, his administration has been highly criticized for a perceived lack of progress in its efforts to house New Yorkers.

The mayor’s supportive housing announcement came after months of negotiations between his administration and that of Governor Andrew Cuomo failed to produce an agreement for a fourth New York/New York agreement, a supportive housing program funded jointly by the city and state, which is now in its third iteration and has been the product of collaboration by prior mayors and governors. Many are still waiting for Cuomo to announce a plan to add to de Blasio’s, or a joint announcement that incorporates de Blasio’s plan into a new New York/New York agreement.

“By making this historic investment, we are confronting the moral crises of homelessness and mental illness our city faces today,” de Blasio said in a statement announcing the plan. “We are not waiting on Albany.”

Though Council Member Torres is confident that the city’s Department of Housing Preservation and Development (HPD) will successfully execute the plan, he indicated that for future supportive housing development plans New York City would need more state funding.

“The city cannot carry the burden on its own in the long run, that’s just my assessment. It’s so expensive that it requires support from both the city and the state,” Torres said. “If you go beyond the 15,000 units, it becomes more of a challenge.”

Cuomo has been criticized by legislators and advocates for only proposing only 3,700 units for the city for the next seven years (8,300 less than what de Blasio requested and 26,300 less than what advocates have said is necessary) for a fourth New York/New York. Unlike previous New York/New York plans in which the state has covered 80 percent of the cost, the governor wants the fourth’s cost evenly shared, fifty-fifty. The most recent agreement expires next year.

“The sheer scale of the catastrophe playing out on our streets demands a sustained solution,” wrote Mary Brosnahan, president of Coalition for the Homeless, in The New York Times’ Room for Debate. “Governor Cuomo's offer is not going to cut it.” Brosnahan said similarly when she spoke at de Blasio’s celebratory supportive housing announcement, shifting the pressure to Cuomo to step up.

Homelessness is the latest policy issue to become a part of the Cuomo-de Blasio feud. As the de Blasio administration dedicates more and more funds to combat the crisis, calling on Cuomo to do so as well, the governor has questioned whether it’s a money issue or a management issue. “New York state is spending a billion dollars on homelessness in New York City,” the governor said in Brooklyn on Nov. 24. “So it’s not the money. . .I think it’s more of a question of the intelligence and the management.”

Last week, Cuomo met with nonprofit groups to discuss various aspects of homelessness policy and practice, and is expected reveal new related plans in his 2016 State of the State address on January 6.

Despite the drama surrounding the issue, Council Member Levin said he is focused on policy details. The $88 million added to the Department of Homeless Services budget in a November update to the fiscal year 2016 financial plan will be discussed at the hearing and though the supportive housing plan was prominent at a recent hearing, Levin said it would probably come up again.

“There’s a lot of noise out there, obviously, and we are eager to try to cut through that noise,” Levin told Gotham Gazette. Adding that the hearing will “look at what’s happening now, how that relates to what’s been happening over the last few years, what efforts are in place right now, examining the efficacy of those efforts - new funding, significant efforts that this administration has put into place.”

“The public deserves a clear picture of what’s really going on,” Levin said. “We are going to examine that as thoroughly and methodically as possible.”