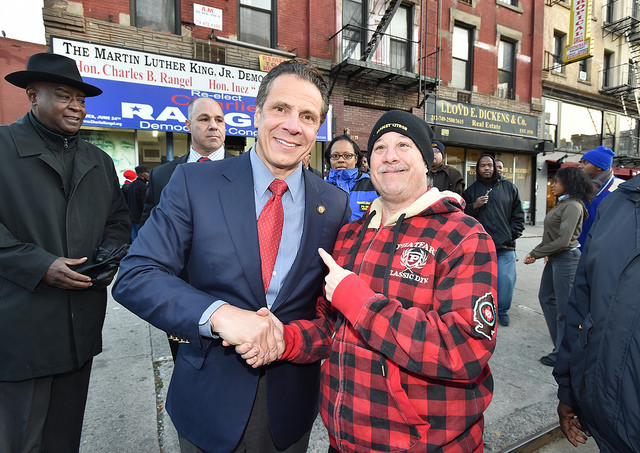 As homelessness has become the latest front in the rivalry between Gov. Andrew Cuomo and Mayor Bill de Blasio, there is at least one thing that the State and the City agree on: New York City homeless shelters need improvement.

Considering all of the political posturing and seeming lack of coordination between city and state officials, the fact that eyes and efforts are being trained on substandard shelter conditions for tens of thousands of New Yorkers who lack stable housing, this source of agreement may lead to positive results.

"Homeless people don't want to go into a shelter," Cuomo said Monday during an aside as he gave a speech on his minimum wage push. "Why? Because it's dirty, it's unsafe. So they're staying out on the street...It's just not right...It's not right to have a shelter system that is so dirty and unsafe, that people have to stay on the street corner."

"Shelters absolutely have to be improved," de Blasio said Monday as he continued to be peppered by press questions about Cuomo's new executive order, which was announced Sunday and deals with homelessness in several ways, including insisting that shelters are in good condition. As Cuomo acknowledged to reporters on Monday, the state has oversight of homeless shelters across New York.

"There's been a safety issue in shelters for years, in fact for decades," de Blasio said, in what is a common refrain: that his administration is taking steps to mend a mess it inherited.

On Monday, de Blasio again pointed to the "shelter repair squad" that the city announced in May after a damning Department of Investigations report (which de Blasio had asked for), and said that "there are very real things that have to be fixed in our shelters...we're on the case."

For many, though, de Blasio isn't acting quickly or effectively enough in reducing the city's street and shelter homeless populations, which total around 60,000 people, or in improving the quality of the city's shelters. Thus leading to Cuomo's executive order and his promise to lay out new policy this month. A recently released audit from Comptroller Scott Stringer - which Cuomo referenced on Monday - brought further detail to shelter problems.

Calling the audit a "damning commentary on the shelter system," Cuomo said he'd be "contacting the comptroller, literally this week" to go over the report and Stringer's proposed remedies. Stringer's audit shows deplorable conditions in many shelters and a lack of city oversight of shelter providers with whom they contract.

In response to the audit, the de Blasio administration said it largely agree with Stringer's recommendations and explained that progress was already being made, including in terms of the repair unit, which, it said on Dec. 21, had "already cleared more than 12,000 violations and will continue until all are cleared."

De Blasio and his aides have continued to push back against some of the criticisms of their management of the homelessness crisis while the city also undergoes a shakeup in leadership and a reassessment of all aspects of its approach to the issue. They cite major increases in rental assistance programs and a significant increase in funding toward new supportive housing units, calling on Cuomo to match.

And, even as that 90-day review progresses, new homelessness-related policies have been rolled out by de Blasio and Steve Banks, commissioner of the city's Human Resources Administration and the administration's point-person on homelessness.

One of those announcements also came Monday: a plan to phase out so-called cluster site homeless sheltering over the next three years. Cluster siting means apartments being rented by the city as shelters, for which the city pays landlords above market-rate prices to provide shelter and services. But, this approach has proven ineffective on several levels, including the condition in which many landlords keep the cluster units - they had been found to be in the worst condition of all shelter types by the DOI.

The governor's executive order, which goes into effect Tuesday, includes a mandate that shelters are kept in good condition: "I direct all local social services districts to comply with their obligation to ensure that all facilities used for temporary housing assistance placements are safe, clean, well maintained and supervised and fully compliant with existing state and local laws, regulations, administrative directives, and guidelines," the order reads.

Stringer's audit says that the city has been placing "homeless families with children in shelters plagued by rodents, mold, peeling paint, and broken windows," among other structural and maintenance problems. There are also problems with theft and violence at and around some shelters.

De Blasio said multiple times Monday that the city must "fix" shelter problems and indicated he feels the city is on the right track. Banks said progress has been made, but also that these processes are under review like everything else involved in the city's approach to homelessness.

Cuomo said on Monday that he would be laying out a "comprehensive plan on the entire matter" in his Jan. 13 State of the State and budget address. He indicated that improving the shelter system will be a part of that plan, saying, "We have to improve the shelter system, one way or another."

Shelters in all New York municipalities are under the governor's purview, of course. "The state regulates the city system," Cuomo said Monday. "The constitutional responsibility runs to the state. The state delegates the responsibility to local - what they call local service districts - basically, cities. We regulate and we reimburse the shelters all across the state. If shelters are not up to code, then we are going to be very diligent in our inspection and management of the existing shelter system. I'm going to lay out that program in the State of the State."

Though they may not be working hand in hand, Cuomo and de Blasio both now own the homelessness crisis, including the shelter crisis therein.