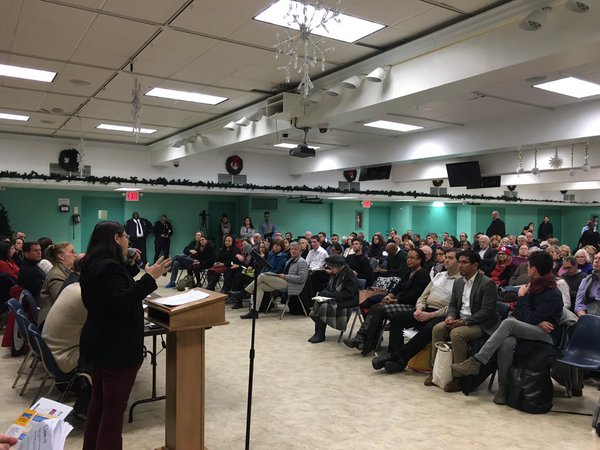 Homelessness town hall on the East Side (photo via @RosieMendez)

At a Tuesday night town hall hosted by City Council Members Dan Garodnick and Rosie Mendez at Gramercy’s Church of the Epiphany, stakeholders voiced concerns about problems related to homelessness, an increasingly controversial issue facing the East Side of Manhattan.

After presentations from city officials and nonprofit leaders who work on homelessness issues, local residents asked questions about how they can resolve problems specific to the area, like the myriad issues with the 850-bed 30th Street Men’s Shelter (also known as “Bellevue”).

“New York City is dealing with a homeless crisis today,” said Council Member Garodnick in his opening remarks. “And this crisis is felt rather acutely in our neighborhood, because we have a lot of facilities which are serving homeless people.”

The most significant one, Garodnick added, being Bellevue.

One audience member asked officials about reducing the size of the shelter: “Can we really think about a path or a strategy to get [the 30th Street Men’s Shelter] from 800 beds to 200 beds, which could then be manageable for all of the fabulous people that work there and all the great programs that you’re doing?”

Garodnick replied that “850 beds is obviously far too large for a particular community to deal with and we see the effects of that every day. We also have a crisis in the city where the city can’t find, build, access facilities sufficiently enough and quick enough to be able to deal with the problem in the entire city.”

Bellevue was a frequent topic of concern and conversation Tuesday night.

“How many people at the 30th Street Center are paroled violent felony offenders?” one person asked. “It’s never related to the public, so we have no way of knowing.”

Though officials mentioned that Bellevue has no sex offenders, they did not indicate that the city has the same knowledge about violent offenders. “I can’t answer that question, because we don’t track every crime category of every client that comes into the shelter system,” Department of Homeless Services security official Louis A. Molina said. Molina also followed up with the person who asked the question after the Q&A session.

Banks informed the audience about the city’s new Home-Stat program, which is aimed at helping those living on the streets, and reiterated support for a “commitment that was made to the community to convert a number of beds at Bellevue into an employment program.” Banks left the forum early to assist a street outreach team, but said that he would receive the community’s input from staff members that attended.

Earlier on Tuesday, Mayor de Blasio announced the hire veteran health administrator Dr. Herminia Palacio as deputy mayor for health and human services. The position, which includes oversight of homeless policy, had been vacant since August.

The forum amid heightened political and policy controversy around homelessness, which has become a multifaceted crisis for de Blasio. After months of criticism over the city’s response to it, the de Blasio administration began a 90-day review of its policies and announced the departure of Gilbert Taylor from his post as head of the beleaguered Department of Homeless Services.

Homelessness is also the latest policy issue in the crosshairs of the feud between de Blasio and Gov. Andrew Cuomo, a harsh critic of the city’s management. On Jan. 13, Cuomo will reveal a plan for the city’s homelessness in his State of the State address.

Earlier this week, Cuomo issued an executive order mandating that municipalities across the state make efforts to move all street homeless individuals into shelters during below-freezing temperatures; that shelter hours are expanded; and that shelters are kept in good condition. De Blasio has indicated that the order would not alter city policy.

During Tuesday’s East Side forum, Commissioner Banks explained that community input will influence his review and recommendations.