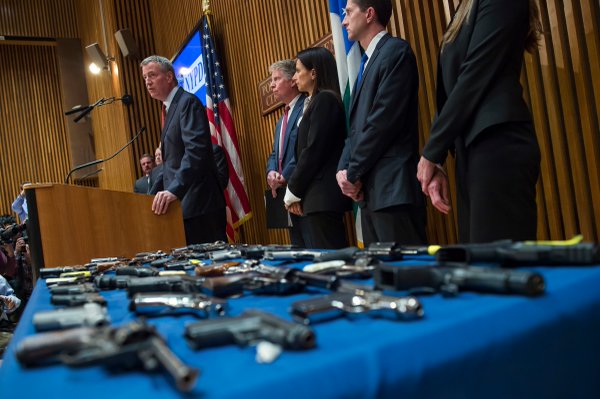 In an effort to reduce gun violence and gun-related crimes, Police Commissioner Bill Bratton says the city intends to create specialized “gun courts” in each of the five boroughs. Gun courts will expedite the handling of gun-related cases to more quickly identify and imprison those who use guns illegally.

The head of the Citizens Crime Commission, Richard Aborn, has been working on the initiative for several months, leading toward an upcoming announcement, Bratton said during a radio interview earlier this week. The collaboration between the CCC and Bratton has “involved the five district attorneys, two of the five are brand new, and Judge Lippman, before he stepped down from the bench,” Bratton explained Tuesday on WNYC.

“The Commissioner’s comments were a teaser...for a larger policy package from the City in coordination with every part of the criminal justice system to ensure that reducing gun violence is taken seriously at every stage,” Monica Klein, a spokesperson for Mayor Bill de Blasio, said in a statement to Gotham Gazette.

It appears the new gun courts pilot program will be launched in Brooklyn, though the ultimate goal is to create a gun court in every borough, where the district attorney can send gun-related cases to fast-track them. The specifics of the program will be officially announced within the next few weeks.

In a statement, Brooklyn District Attorney Ken Thompson said, “A dedicated judge will help us prosecute gun cases faster and more efficiently in Brooklyn. We are in discussions with court officials about setting up this specialized part and having it up and running in the coming weeks.”

Staten Island’s new District Attorney, Mike McMahon, “was not privy to any conversations the previous administration may have had regarding gun courts,” having only taken office several days ago, though he “has spoken this week with NYPD Commissioner Bratton to schedule a meeting to discuss gun courts, gun violence, and other issues,” Douglas Auer, director of communications for McMahon, told Gotham Gazette.

In 2015, shooting incidents declined overall, though murders were up slightly from 2014's record low, and killings committed by shooting were “up fairly dramatically,” Bratton said. Gun arrests increased by 10 percent from the previous year, and the NYPD seized a “record number of guns.”

Mayor Michael Bloomberg created a pilot gun court program in Brooklyn in 2003, under then-DA Charles Hynes, which saw an increase in the amount of jail time defendants received, though the program was discontinued. Gun courts were first established in Providence, Rhode Island in 1994, and also exist in Philadelphia, Boston, and Birmingham, Alabama.

Similar to drug courts, gun courts streamline the processing of gun-related cases, allowing judges to focus attention on gun-related crimes, rather than mixing such cases in with various other offenses, such as murder or rape, which may make, for example, illegal possession of a firearm, seem like a less serious offense by comparison.

However, unlike drug courts, which largely redirect drug offenders to treatment programs rather than prison, gun courts often result in harsher punishments for those accused of gun-related crimes, though the main intent is to move gun-related offenses through the criminal justice system more swiftly and efficiently in order to get those who have committed gun-related crimes off the streets as quickly as possible.

New York’s new gun courts will work by employing “the precision model,” Bratton said, by “drilling down - instead of basically suspecting one million minority males and stopping them every year,” gun courts will allow law enforcement to “focus on understanding who it is within the community who are committing these crimes and focus attention on them.” In saying this, Bratton was referring, again, to the overuse of stop-and-frisk tactics during the previous administration.

Bratton believes the system is “under-sentencing people involved in gun crimes,” and wants judges to “maximize the penalties” in cases of violent crime.

“Those several thousand people in the city who think nothing of taking out a gun and shooting another human being, they need to be treated with every ounce of the justice system that we can apply to them to basically get them off the streets and keep them away from the rest of us,” Bratton said on WNYC.

One advantage of creating gun courts could be that “putting a priority on prosecuting gun crimes will serve as a deterrent,” said Leah Gunn Barrett, executive director of New Yorkers Against Gun Violence, in an interview with Gotham Gazette. “If people know that they’re going to be hit hard and fast with a conviction or charge,” it could discourage people from committing gun-related crimes.

New York does have strong gun laws, including a 3.5 year mandatory minimum for anyone caught carrying a loaded, illegal weapon. Yet with 90 percent of guns recovered from crimes in New York City originating from other states, such as Georgia and Virginia, there is only so much the city and state can do to keep guns from being used illegally.

To combat the flow of illegal guns into the city, New York law enforcement works to identify and break up gun trafficking rings - like the one that smuggled 112 guns into the city over the course of a year - but until federal action is taken to make it harder for those who intend to commit gun crimes to get guns, such efforts are simply putting a bandaid on a bullet wound.

“Two high profile police shootings involved guns that were traced back to Georgia...Until we have strong federal gun laws, we’re going to have this problem,” Barrett said.

Senator Kirsten Gillibrand has put forward an anti-gun trafficking bill (for the second time), which would elevate gun trafficking to a felony. “At the moment, it’s a misdemeanor - the same charge you get if you were trafficking a chicken,” Barrett said, “this is a problem that needs to be addressed at the federal level.”

On Tuesday, President Obama issued executive orders to help increase gun safety by expanding who is required to have a background check before purchasing a gun and tightening rules for reporting guns that are lost or stolen, among others. Though there is relatively little that can be done to make more stringent gun control a reality without action from Congress.

There is something that New York City and State can do to reduce gun-related crimes, Barrett says, since 10 percent of crime guns recovered by city law enforcement originate from New York.

“If the mayor and the police commissioner would publish the source of the crime guns, where these guns are coming from in New York State, that would be very valuable to know, because that would inform our advocacy,” Barrett said. If it turned out that a large number of those crime guns were stolen, for example, gun safety advocates would push for safe storage laws in New York.

“I do believe we have to put a lot of resources into dealing with the gun violence problem,” City Council Member Jumaane Williams told Gotham Gazette. “What worries me is that we seem to be very much law enforcement heavy as a resource, as opposed to other things that are needed to stop the systemic problem” of gun violence, such as reducing the “demand for violence” through programs like one led by the gun violence task force in the City Council, which Williams leads and provides services such as job training and legal, mental health, and mediation services in neighborhoods with higher rates of gun violence.

To Williams, “the main thing is that public safety can’t just be the domain of law enforcement. We need many agencies working together on this.” Efforts by law enforcement to address the systemic problem of gun violence “has to be part of the solution, but it can’t be something we hang our hat on,” he said.

Cracking down on those involved with gun-related crimes is generally viewed as a step in the right direction, though gun courts also raise concerns for some.

“The impulse is a good one - to target criminals who use guns and to incapacitate them if necessary,” Eugene O’Donnell, professor of law, political science, and criminal justice at John Jay College told Gotham Gazette. “However, in practice, there are many different situations where individuals are arrested for gun possession who are not hardened felons, and that has always been the rub.”

When Gotham Gazette reached out to the NYPD, the office of the deputy commissioner for public information said no one was available to comment. The Manhattan and Queens district attorney offices declined to comment, and a spokesperson for the Bronx district attorney said gun-related crimes are a concern for new DA Darcel Clark, but had no further comment. A representative for the Citizens Crime Commission told Gotham Gazette he could not say anything more about gun courts than what Bratton already revealed during his radio appearances before the official announcement.