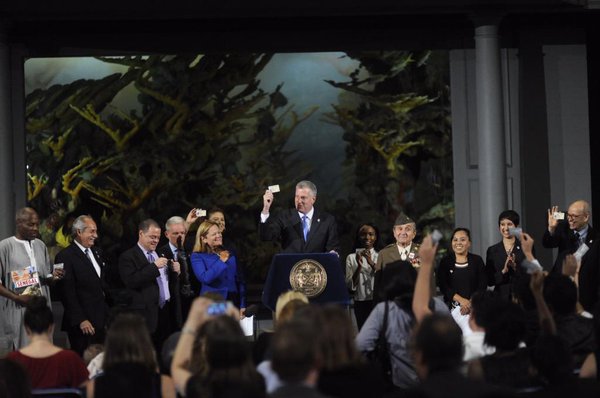 The Mayor & others flash their IDNYC (photo: Madeleine Ball)

It has been one year since New York City launched its ambitious municipal identification program, dubbed IDNYC, and reports show that the program has been a resounding success. More than 725,000 card applications have been approved, about 10 percent of the eligible population of New Yorkers 14 years of age or older.

One of the primary purposes of the program is to provide valid identification for undocumented immigrants living in New York City, of which there are an estimated 640,000. By the very nature of the program -- accepting applications regardless of immigration status and not asking about it on application forms -- quantifying enrollment among undocumented immigrants is hard, if not impossible. But, as the success of the card has led to its celebration and assumptions that undocumented New Yorkers are taking advantage of the program, there is indeed evidence that the de Blasio administration and advocates point to.

Ancillary data provided to Gotham Gazette by the Mayor's Office of Immigrant Affairs, which is one of the agencies leading implementation of IDNYC, indicates that immigrants in large numbers have availed of the program.

By the end of last year, 732,630 people had applied for the ID, with a high ratio of enrollment coming from immigrant-rich communities across the five boroughs. In Queens, 25,366 identity cards were issued in Corona, another 28,707 in Flushing and 13,654 in Jackson Heights. In Sunset Park, Brooklyn, 22,139 people were issued IDNYC. In Manhattan, 10,142 Chinatown residents and 27,213 people from Washington Heights enrolled in the program.

In providing further indication of interest from immigrant New Yorkers, MOIA reported that 52 percent of IDNYC inquiries to the city's 311 helpline were from non-English speakers. Of these, 88 percent spoke Spanish, 4.6 percent spoke Mandarin, followed in turn by Cantonese, Russian, Korean, and at least nine other languages.

"We knew there was a huge need for identification but the dramatic response was more than we expected," said MOIA Commissioner Nisha Agarwal in an interview. "This indirect data suggests that immigrants are benefitting from it."

Non-profit organizations that work with immigrants agree that IDNYC has been an unqualified success. "If hundreds of thousands of people are getting the IDs, you can imagine that tens of thousands of undocumented immigrants are getting it," said Thanu Yakupitiyage, communications manager for the New York Immigration Coalition. NYIC is an umbrella advocacy organization that works with more than 200 groups across the city helping immigrants and refugees.

"Immigrants now feel that they're part of the city in a meaningful way," said Yakupitiyage. "For immigrants, the IDNYC is supporting police-community relations. They can now enter municipal and federal buildings, sign a lease and get a bank account. It's a badge of being a New Yorker." She also cited the program's unprecedented success compared to other municipal identification initiatives elsewhere in the country, such as San Francisco, where enrollment in the first year only touched about two percent.

Other groups tell similar stories. Jose Calderon, president of the Hispanic Federation, said that thousands of the people they serve have received the identity cards and now feel a sense of safety and security from it. "It's changed lives in ways that it's hard to quantify, but it's transformative," he said. "It has opened up a new city to people who for decades, even generations have been denied it."

Calderon said the next step forward would be ensuring that immigrants can receive all the benefits of the card. "We're hoping this ID creates a bridge between the financial sector and this largely unbanked community," he said. "The hope is to make that connection that's long been missing."

This will take some work. Major banks operating in New York recently announced that they would not be accepting IDNYC as a primary source of identification in opening a bank account. This was met with disappointment by leading elected officials, including Mayor Bill de Blasio, Comptroller SCott Stringer, and City Council Speaker Melissa Mark-Viverito. Amalgamated Bank, among about a dozen financial institutions operating about 75 branches across the city, does accept IDNYC for banking purposes.

In announcing an expanded year two for IDNYC in December, de Blasio called it "the leading municipal identification program in the country, and an example to cities all across the world."

In a statement at the time, Mark-Viverito pointed to access for all, saying, "No matter your status, whether it's immigrant, economic, financial, or if you're homeless or transgender, New Yorkers will be able to take advantage of benefits by signing up for this valuable card."

Make the Road New York's co-executive director, Javier Valdes, called IDNYC a "homerun." He said it provides immigrants security and alleviates the anxiety in interactions with the police. His main concern is related to banking, he said.

Valdes also hoped that the program stays affordable. "It's going to be free for the second year as well, which I think should be done in perpetuity," he said. There had been some speculation that the card would cost around ten dollars in the second year, but the city announced it would remain free and that there were enhanced benefits, continuing its efforts to make the card appealing to all New Yorkers.

Besides keeping IDNYC free of cost, the city has already announced partnerships with more cultural institutions for 2016, bringing the total to more than 40 museums and other organizations. The IDNYC also provides discounts on pet adoptions, the New York Theatre Ballet, soccer matches of New York Football Club, and CitiBike memberships, among other benefits.

For MOIA's Agarwal, the next big step is increasing outreach efforts, particularly in immigrant communities. Last year, IDNYC held pop-up enrollments in 53 locations and the outreach team attended at least 1,700 community events, besides its massive advertising campaign. Agarwal said they would set up more pop-up enrollment centers and also look into bringing art and culture to the program with the help of an artist-in-residence at MOIA.

"We're exploring the next generation of IDNYC enrollment," she said. Her focus will be reaching out to vulnerable groups such as youth populations (Last year, 21,239 minors received the card) and using more portable technology to work with seniors while making it easier to connect the card with city services.

"I think it unifies our city," said Valdes from Make the Road NY, "regardless of who you are, where you live or where you're from."