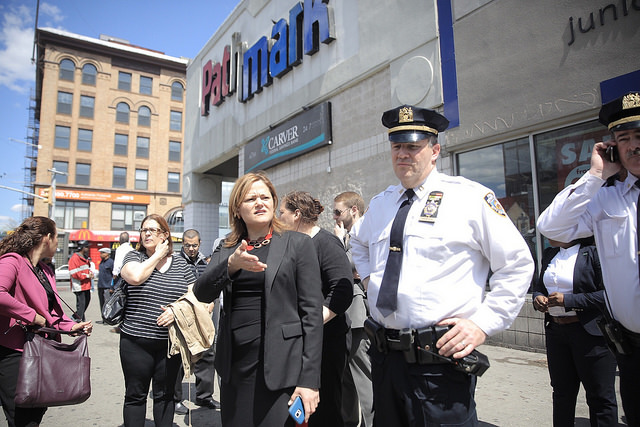 When a bill comes to the floor of the New York City Council, it is guaranteed to pass. And so it was on Tuesday, when the Council voted through the Grocery Worker Retention Act, which mandates that new owners of large grocery stores maintain employment of the store workforce for 90 days. But while most bills pass unanimously and some garner only two or three dissenting votes from the Council's three-member Republican caucus, the GWRA garnered seven "no" votes.

Five of the Council's 47 Democrats and two of the three Republicans voted against the bill, which passed 40-7 as three members were absent and there is one vacant Council seat after a recent resignation. (A Gotham Gazette report previously found that in 2014, six was the most "no" votes received by any bill passing through the Council.)

The fact that several Council members took time to explain opposition to the bill during the vote gave a rare semblance of debate to what is typically an atmosphere of near or full unanimity. Even among the dissenters, reasons varied, though most called the bill government overreach into the private sector. For the overwhelming majority who voted in favor of the bill, the rationale is that the grocery industry is in the midst of an especially volatile period that has had severe consequences for many working class New Yorkers and their families.

"I believe this is a well-intentioned effort and I have great respect for the bill's sponsor," Council Member Dan Garodnick said Wednesday, leading to his "no" vote, and referring to Council Member Daneek Miller. "But with this bill we are interjecting local government into private enterprise in a way that we should not be doing. We are going too far."

Council members supporting the bill, led by Miller, explained and defended the bill as necessary and pointed to the fact that the city has taken such measures before, namely to protect building service workers.

After defending the bill on the Council floor Tuesday, Council Member Brad Lander took to Twitter Wednesday morning to respond to criticism of the GWRA by grocery store owners in a Crain's New York Business article. Lander wrote, "We have the same modest "worker retention" law in place for building service workers, and no business collapses have been reported."

During a press conference before the vote, Council Speaker Melissa Mark-Viverito pointed to that precedent and said that the Council may be looking at other industries as well. "There is a similar bill that we passed several years ago when it comes to service workers," she said. "And we wanted to move this very quickly and that doesn't mean we're not looking at other industries as well."

"We needed to move this very quickly because of the recent closures and bankruptcy and what some of these workers were going through," Mark-Viverito continued, pointing to examples in her northern Manhattan district. She added that just because this grocery store bill was being passed, "doesn't mean that we're not looking at other industries, 'cause we are."

On the Council floor, Garodnick said that all workers should have rights, including the right to unionize, and that the Council should support efforts to unionize and fight for fair wages and benefits. He went on, though, to analyze the bill's provisions, asking rhetorically, "Why...would we protect workers only for 90 days? Why not six months? Or a year? Or more? Why are we limiting ourselves to this industry? Why not protect the workers in our local pizza shop? Or even the financial services industry? If you buy a supermarket with 100 workers and you believe that you can make it survive and make a profit, and you only need 90 workers, we should let you do that, without interference."

Joining Garodnick in casting "no" votes were fellow Democratic Council Members David Greenfield, Rafael Espinal, James Vacca, and Antonio Reynoso; as well as Republicans Joseph Borelli and Steven Matteo. The Council's other Republican member, Eric Ulrich, was a co-sponsor of the bill and voted in favor. Reynoso said that the bill did little for people in his district, where the "supermarkets" are local bodegas, often owned by immigrants struggling to get by.

While Garodnick's 'overreach' critiques were echoed by others who voted against the bill - and even acknowledged by some who voted for it - 40 Council members supported the bill. Council members from Queens, Manhattan, and the Bronx spoke of the negative consequences of losing supermarkets in their districts or from the mass layoffs that disrupted communities after a supermarket sale.

Council Member Danny Dromm, of Queens, said, "I have seen what happens when these small supermarkets are closed...we had this situation in Jackson Heights about two years ago when one day, two weeks before Christmas, employees arrived to find out they had been locked out of the door, and when the new owner came in and took over the supermarket, he would not rehire the workers, even though they had not done anything wrong. I totally agree with this legislation, nothing in this law says that the workers have to stay on beyond the 90 days."

At the press conference before the full Council meeting, Mark-Viverito and Miller positioned the bill as an important step in the Council's ongoing work to protect workers. "This City Council is committed to protecting the rights and dignity of all workers in our city," Mark-Viverito said, "and with this legislation, we're taking another step toward that goal. Grocery store employees provide a valuable service to their community - we still have too many food deserts across the city of New York, my community is one of them. And at a minimum, these workers should have an opportunity to prove their worth before losing their jobs to changes in ownership."

The Council has taken an aggressive stance in regulating workplace and workforce issues, including expanding paid sick leave and moving through legislation to protect freelancers.

In outlining the GWRA, Council Member Miller said, "Now keep in mind these are not small bodegas or smaller stores, these are at least 10,000 feet of sales, not storage, not parking. So this is significant space and we need to protect workers, but more importantly, protect communities."

The language of the bill defines which employees and what stores are covered:

"The term "eligible grocery employee" means any person employed by a grocery establishment subject to a change in control, and who has been employed by such establishment on a full-time or a part-time basis for a period of at least six months prior to the effective date of the change in control; provided that such term shall not include persons who are managerial, supervisory or confidential employees or persons who on average regularly worked fewer than eight hours per week during such period."

"The term "grocery establishment" means any retail store in the city of New York in which the sale of food for off-site consumption comprises fifty percent or more of store sales and that exceeds 10,000 square feet in size, exclusive of any storage space, loading dock, food preparation space or eating area designated for the consumption of prepared food."

Mayor Bill de Blasio is expected to sign the bill at an upcoming ceremony.