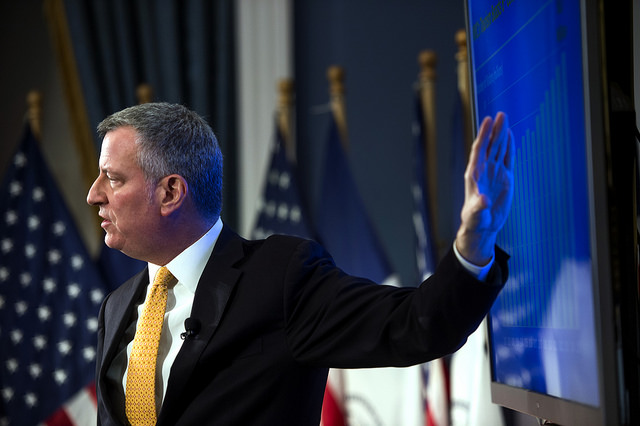 New York City's fiscal year begins July 1. As the city moves toward a fiscal year 2017 budget agreement between Mayor Bill de Blasio and the City Council by June 30, the mayor began the process on Thursday when he unveiled his preliminary budget, which comes in at $82.1 billion.

De Blasio took pains to stress the need for caution given some larger economic warning signs and an inevitable slowdown of a what has been a bullish economy yielding strong job gains and massive overall revenues for the city. Still, the budget has grown by more than 10 percent since de Blasio took office - in no small part due, though, to the fact that the mayor came into office with none of the municipal unions under current contracts and has negotiated about 94 percent of the workforce into deals.

De Blasio admitted it was a relatively "boring" budget, but said "it's a good boring," explaining that "a lot of what we're focused on is moving the agenda we started in the first two years: the affordable housing plan, the Equity and Excellence agenda for our schools...the neighborhood policing plan – I mean, we don't need to always have splashy new things when we feel that the choices we've made are going to have a huge impact if we implement them right. So this year's going to be a lot about implementing the pieces that are already underway and making sure they reach people – Vision Zero, obviously."

While saying the administration is adding funds to back his ongoing housing, education, and other equity-focused initiatives, de Blasio also highlighted new spending "such as $12.1 million in expense funds for 327 new Traffic Enforcement Agents that will improve traffic flow and safety, and $868 million in capital to reduce school overcrowding through 11,800 new seats."

The city is adding money to fund an increase in the minimum wage for city employees, its increasing homelessness-fighting efforts, the new mental health roadmap that First Lady Chirlane McCray is spearheading, and additional school literacy coaches, park security agents, and correction officers.

De Blasio explained that along with several hundred million dollars in added spending, the budget shows $1 billion in savings, including about $400 million from debt consolidation and $500 million from agency cuts.

Still, de Blasio said he's strongly considering instituting a PEG - program to eliminate the gap - for his Executive Budget, which would require all his agencies to identify potential savings of a set amount, followed by the mayor deciding what to cut. About half the City Council recently recommended that the mayor use a PEG, which he has eschewed thus far over his three years, but was a mainstay of prior mayors.

"We think $5 billion is a very healthy number given a typical – if you'll forgive the phrase – a typical economic downturn," de Blasio said of what the city now has in reserves, which he said is an unprecedented number. "They're the most substantial reserves the city has ever had."

The city could need more than $5 billion, though, if there is a significant economic downturn. The mayor said he's "going to be looking at the Executive Budget in terms of the question of agency savings" through a PEG.

Of the mayor's budget, the president of the Citizens Budget Commission, Carol Kellermann, said in a statement to Gotham Gazette, "It raises spending without significant offsetting savings and/or increases in reserves. The Mayor acknowledged and warned of the risks to the budget in the event of a downturn and said that there will be a serious effort at agency savings between now and the Executive Budget. We look forward to hearing about the results of that effort."

De Blasio argued that he was striking the right balance. "You know, the trick here is we have to protect against future dangers while continuing to build our economy," he said, "and obviously addressing the quality of life and the needs of New Yorkers. When we build our economy, that brings in revenue."

"I'm a lot more concerned than I was this time a year ago," de Blasio said about economic risks, even though he had expressed fairly strong concerns last year, citing the potential effects of terrorism, a slowdown of the Chinese economy and the U.S. stock market, and more.

Some of where the city heads in its process will of course be dictated by the state budget - which is due by April 1. Governor Andrew Cuomo unveiled his Executive Budget last week, including several items pleasing to de Blasio and many New York City leaders and advocates, but also a few key potentially costly provisions.

Those possible cuts include to the funding the state sends back to the city for CUNY and Medicaid payments. Gov. Cuomo has indicated that his plans on those two fronts "won't cost the city a penny" and that he was putting ideas forward to collaborate on finding efficiencies in these two cases where the city and state run the programs together.

"I'm not saying we don't have to worry about it," de Basio told reporters of the possible cuts in state aid to the two programs. "I'm saying I am taking the governor at his word, and I will hold him to that word...He said he wants to find collaborative process to find reforms and savings."

De Blasio heads to Albany on Tuesday, where he will testify at a joint legislative budget hearing of Senate and Assembly finance committee members.

Soon, the City Council begins several weeks of preliminary budget hearings, leading up to its official response, which will come in an April letter. Other watchdogs, both in and outside of government, will weigh in throughout the process - including Comptroller Scott Stringer, who will release his preliminary budget analysis within the next few weeks.

The mayor will take into account these and other factors, and release his Executive Budget in late April or early May, leading to another round of City Council budget hearings, negotiations, and a deal.