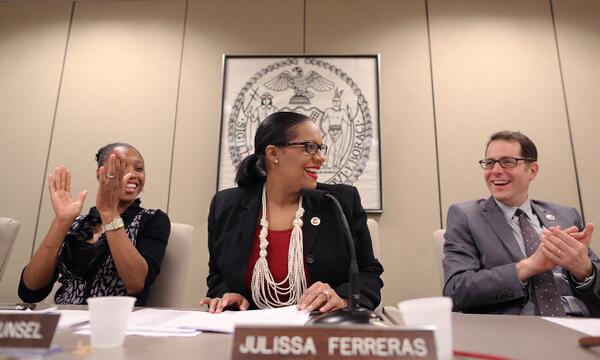 Members of the New York City Council are poised to introduce a package of legislation to make tampons and other feminine hygiene products more accessible. The legislation, being spearheaded by Council Member Julissa Ferreras-Copeland, includes a resolution calling on the state to eliminate the tax on feminine hygiene products, and three bills to make such products readily available for free in public schools, shelters, and correctional facilities across New York City.

“We have legislation being drafted as we speak…we’re going to be introducing it as a package in the next weeks or months,” Ferreras-Copeland, who represents parts of Queens and chairs the Committee on Finance, told Gotham Gazette on Tuesday.

“We are going to be rolling out a package of solutions that will address the Department of Education, Homeless Services, and the Department of Correction,” she explained, as well as a resolution “currently being drafted” calling on the state to pass the bill introduced by Assemblymember Linda Rosenthal to make feminine hygiene products “not taxed by New York State or the City.”

Ferreras-Copeland has been working on the issue for months, having conversations with city officials at the relevant departments, talking with young people, and offering free feminine hygiene products at her offices. Speaking with Gotham Gazette, she noted that she had been offering free condoms for quite some time and that it only made sense to also offer tampons and pads.

With some incredulity, Ferreras-Copeland discusses how challenging it can be for young women and poor women of all ages to have easy access to feminine hygiene products.

Currently, there is no citywide policy on access to feminine hygiene products in New York City schools. When girls get their period and aren’t carrying tampons or pads, they often must miss class time and go to the nurse’s office in order to get what they need.

So, Ferreras-Copeland said, in one school a “young girl could ask the nurse and she would get the pad and in another school, the girl would have to go to the counselor who then would give her a pass to the nurse, and then, at the nurse’s office, she has to sign and put her student ID and [explain] why she didn’t have a pad before she got a pad.”

Schools Chancellor Carmen Fariña has agreed that there should be a citywide policy, Ferreras-Copeland said, but the DOE did raise questions regarding the cost of providing free tampons and pads in schools.

“As finance chair, obviously I’m always thinking about the cost,” Ferreras-Copeland said. “But I’ve never heard anybody complaining about how much it costs to buy toilet paper at the DOE.”

When men walk into a bathroom, they are provided with everything they need to take care of their normal bodily functions - women are not. No student has to ask several people to get toilet paper.

“It’s a matter of basic human dignity,” said Jennifer Weiss-Wolf, a leading national voice calling for better access to feminine hygiene products and vice president of development at the Brennan Center for Justice.

According to Ferreras-Copeland, conversations with Fariña and the DOE were productive, and an announcement with the DOE will be made “in the coming weeks,” probably before the Council legislation is introduced.

In her Queens district, Ferreras-Copeland and the DOE are already running a pilot program in one public high school, which installed a dispenser with free tampons and pads in the girls’ bathrooms. The program, Ferreras-Copeland said, “was very well-received by the young people and the parents in the schools.”

Even with cooperation from the DOE, Ferreras-Copeland said she was determined to move legislation so that the policy would remain in place regardless of the schools chancellor or other future elected or appointed officials.

Tampons and pads are also in short supply in homeless shelters, where women are already often unable to purchase such products. SNAP, WIC, and flexible spending accounts cannot be used to buy tampons or pads. Congressional Rep. Grace Meng from Queens has introduced a bill that would reclassify feminine hygiene products so that they can be purchased with flexible spending accounts.

Last summer, Ferreras-Copeland held a roundtable with students, representatives from the Women’s Prison Association, Care for the Homeless, and Food Bank for New York, among others, during which, Ferreras-Copeland said, “I learned that [tampons and pads] are the number one product to fly off the shelves when they have them available at food pantries, because there’s such a need.”

The situation in prisons is even more humiliating, where women ration pads just to make it through their cycle because they are only given a small supply and cannot afford to buy more from the (often understocked) commissaries.

During that roundtable discussion last summer, Ferreras-Copeland said she heard from representatives of the Women’s Prison Association that “some women were reduced to using one pad for their whole cycle.” City Corrections Commissioner Joseph Ponte was not particularly receptive to her interest in improving access in prisons, Ferreras-Copeland said, again incentivizing her approach to legislating the issue.

Ferreras-Copeland is developing the package of legislation in conjunction with City Council Speaker Melissa Mark-Viverito and Council Member Elizabeth Crowley. There are certain to be a number of other co-sponsors once the bills are written and introduced to the Council.

A press secretary for Mark-Viverito, Robin Levine, said in a statement to Gotham Gazette, "These are very important issues and the Council is proud to be taking them up.”

“For New York City to make a demonstration of support like this for menstrual health - the world watches New York City, so I think leading by example in this way is incredibly important,” said Weiss-Wolf, who has written about “fair and equitable menstrual policy” for The New York Times and other publications, and started a petition with Cosmopolitan Magazine calling on state legislators to exempt feminine hygiene products from sales taxes.

In New York City, the total sales tax is 8.875 percent, meaning women pay an extra 89 cents to buy a $9.99 box of 36 tampons. Women will spend an average of $70 per year on menstrual products. On average, women have their first period around age 12, and continue to get their period until age 50.

While the tax may be a matter of cents, for those living paycheck to paycheck, every penny counts. Taxing an item only women need is a matter of gender equity, advocates say, and places an unfair added burden on women who already make 78 cents to every dollar that a man makes. African-American and Latina women are hit even harder, earning 64 cents and 56 cents, respectively, for every dollar earned by a white man, according to the U.S. Bureau of Labor Statistics.

Five states have already scrapped the tampon tax: New Jersey, Maryland, Massachusetts, Pennsylvania, and Minnesota. Five others do not have a sales tax, leaving 40 states taxing tampons and pads, but not products that are considered necessities, like food and medicine.

Last week, Ingrid Nilsen of USA News Today asked President Barack Obama why states tax tampons, he said, “I have no idea why states would tax tampons as luxury items. I suspect it’s because men were making the laws when those taxes were passed.”

“I think it’s pretty sensible for women...to work to get those taxes removed,” the president continued, “...it’d be governors and state legislatures who would have to reverse those.”

To Weiss-Wolf and others, the so-called tampon tax isn’t some misogynistic plot against women, it’s “just what happens when you don’t have women at the decision-making table. Our needs are not recognized or considered.”

“It’s not because they’re patently ignored,” Weiss-Wolf said of women's needs, “it's just not even on their radar screen - but this [New York City Council] legislation goes a long way to eliminating one obstacle."