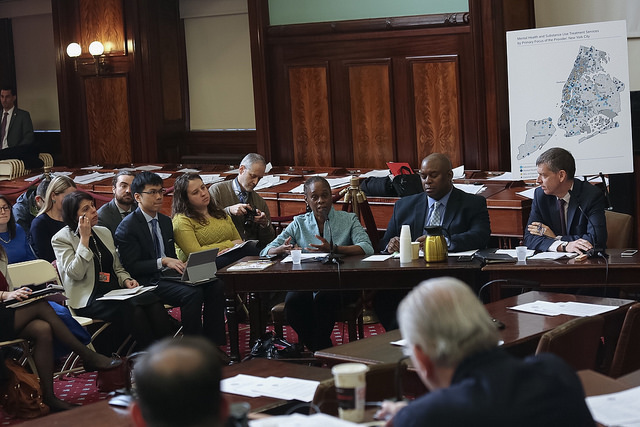 At a Jan. 28 oversight hearing held by the Committee on Mental Health, First Lady Chirlane McCray testified before the City Council for the first time, updating the Council on the city’s progress implementing its new “mental health roadmap.”

ThriveNYC, as the roadmap is called, is spearheaded by McCray and entails a comprehensive effort involving over 20 city agencies, 54 initiatives, and $850 million allocated over the next four years to improve access to quality mental health care.

McCray, joined by Deputy Mayor Richard Buery and Dr. Gary Belkin, executive deputy commissioner of the city's Department of Health and Mental Hygiene, emphasized the ThriveNYC focus on creating more points of entry into the mental health care system for New Yorkers, the importance of early intervention, and eliminating the stigma associated with mental illness. Buery has been named by Mayor Bill de Blasio and McCray as the City Hall point person for the implementation of ThriveNYC.

During the hearing, Council members praised McCray, who is the Chair of the Mayor’s Fund to Advance New York City, for her role in making mental health a priority for the city, and were generally impressed by the progress that has been made so far.

“The roadmap was only released at the end of November, and the fact that the ball is rolling on some of them bodes well for how this is going to go,” Council Member Andrew Cohen, chair of the Committee on Mental Health, told Gotham Gazette in a post-hearing interview. Cohen added that he was “very pleased” with the hearing and thought it went “very, very well.”

Cohen conceded that the McCray, Buery, and Belkin were not “100 percent certain” about what benchmarks or metrics would be best to measure the success of each of ThriveNYC’s initiatives, as one metric may be appropriate for one initiative, but different standards may be needed for another initiative.

“But, I think as they start rolling them out and as they start providing these services, we’re going to be very interested in seeing that there’s some way to quantify that the programs are successful, that the taxpayers are getting their money’s worth,” Cohen added.

Though Council Member Joe Borelli, who represents the South Shore of Staten Island, told Gotham Gazette he was “happy to hear that the First Lady has made [mental health] a priority and that it’s actually resulted in the city administration looking at mental health as a priority,” Borelli did take issue with ThriveNYC’s lack of resources and plans to address the opioid epidemic on Staten Island.

“Deputy Mayor, in your testimony you made a point to highlight a number of different ethnic and community groups that have specific needs, and what is potentially going to be done to address it...the number one county in the entire state [for heroin and opioid addiction] is Richmond County,” Borelli said during the hearing.

And in Richmond County, the problem is primarily concentrated on the South Shore of Staten Island, Borelli continued, “and yet, I look on the map and I see only three blobs that have any substance abuse counseling in this area - one of which is about to be closed.”

Ideally, Borelli said in an interview after the hearing, he’d like to see more SAPIS (Substance Abuse Prevention and Intervention Specialist) counselors in Staten Island schools. Tottenville High School, for example, has “almost 4,000 students, and it only has one counselor. There’s a real need,” said Borelli.

Some community-based organizations also expressed frustration during the hearing. Alan Ross, executive director of Samaritans of NYC, a 24-hour suicide prevention hotline, took issue with the fact that several ThriveNYC initiatives are being touted as “new,” yet organizations that already carried out such work in New York City had seen their funding cut and programs terminated.

“There are apparent contradictions in the plan that warrant further examination,” Ross said. “You’ve got these goals, but four years ago they terminated several programs and they said LifeNet was going to pick up all the service and then last year LifeNet couldn’t handle the weight,” Ross continued, looking to the de Blasio administration to address changes made under its predecessor.

“We need to acknowledge the tremendous efforts currently undertaken every day by community agencies,” added John Kastan, chief program officer of Jewish Board of Family and Children's Services. “For ThriveNYC to work, it must...build on the existing infrastructure of services, rather than create a parallel system.”

Cohen expressed agreement on that point, saying in an interview after the hearing, “ultimately the strength of that community is going to drive how successful the roadmap is going to be.”

“The RFPs have to meet the service-provider network that we have,” Cohen added,” I think these service providers need to be a part of developing the specifics of these RFPs so we get a lot of responses and so there’s a successful, not-for-profit program implementing these measures.”

City funding of $62 million has been allocated to ThriveNYC in the fiscal year 2017 preliminary budget unveiled by Mayor de Blasio on Jan. 21. According to McCray and Buery, some of the recent progress that has been made in implementing ThriveNYC and upcoming benchmarks for this year include:

On February 23, a Mental Health Council comprised of the leaders of more than 20 city agencies will meet for the first time, in an effort to ensure effective planning and coordination across all agencies.

In March, the city will announce the community-based organizations that will participate in the Connection to Care program, a public-private partnership that aims to reduce stigma and increase access to mental health services by integrating mental wellness supports into existing social services agencies.

By this summer, the city, in partnership with schools and social workers, will have its first cohort of 130 new clinicians in the mental health workforce seeing patients. Starting in fiscal year 2017 (which begins July 1), the city will contract a community-based organization to train 200 peer support specialists per year.

To McCray, the mental health roadmap may just be the “tip of the iceberg...ThriveNYC is not intended to be a cure all - it wasn’t intended to fix the problem, it’s intended as a first step, as a conversation starter, and it’s intended to deal with those things that are in front of us right now that we can actually treat and address.”