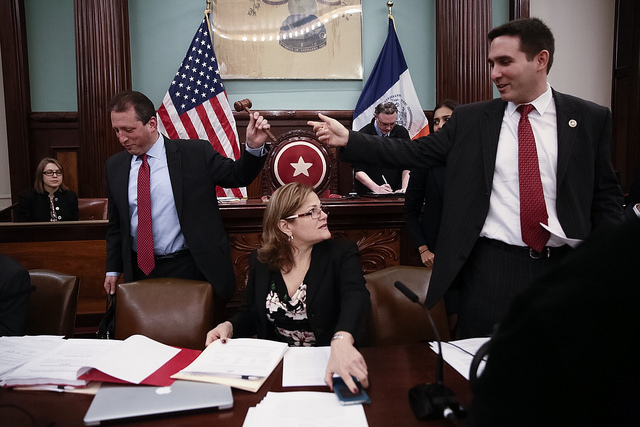 At the first and only City Council hearing on a package of legislation that will raise the salaries of all the city’s elected officials and reform how Council members are compensated, the Council was roundly praised for accepting several reforms long sought by good government groups, but criticized both for raising their salaries higher than recommended and for the the timing of the vote.

The proposed legislation was first announced late last Thursday, and the vote will take place two days after Wednesday's hearing, during an usual Friday session. The raises are retroactive to Jan. 1, regardless of when the bills are passed.

Asking that the Council delay the vote in order to allow more public input, Dick Dadey, executive director of the good government group Citizens Union, testified, “not delaying denies the public sufficient input on a matter that they will pay for and from which you personally benefit.” Dadey and Citizens Union had previously expressed criticism of the Council crafting its plan without a public hearing first.

The four bills largely adhere to the recommendations made by an independent advisory commission tasked with reviewing the compensation levels of the city’s elected officials, including eliminating stipends for chairing committees, making the Council member position full time, and raising the salaries of the Mayor, Comptroller, Public Advocate, Borough Presidents, and District Attorneys to the amount outlined by the commission.

Other reforms, like mandating that financial disclosure forms be published online, banning almost all outside income, and making future raises prospective, go a step further than the commission’s report had recommended. These changes are earning the Council praise from good government advocates.

Significantly, the Council’s proposed legislation will raise Council member salaries from $112,500 to $148,500 - $10,185 higher than the $138,315 salary the commission had recommended. This, Council members say, is to compensate for the fact that they will ban almost all forms of outside income.

Yet, only three Council members currently earn significant outside income, and they will be grandfathered in until the end of their current term.

“We did not recommend any additional bump in pay [for eliminating outside income]…considering the fact that only very few of the members here have an income that would be banned under the new law, and the grandfathering…no present City Council person is adversely affected by the change until the end of this term,” Fritz Schwarz, Jr., chief counsel at the Brennan Center for Justice and chair of the advisory commission said during his testimony.

Dadey and Susan Lerner, executive director of Common Cause NY, also took issue with the bonus for banning outside income, and suggested that particular increase should only be effective after the ban on outside income affects all members, on Jan. 1, 2018.

Of the three members of the Council earning significant outside income who will get the new salary nonetheless, Lerner said, “for the next year and a half, they are also going to be collecting that outside income. So that double-dipping doesn’t really make any sense to us.”

“These raises, the first in almost a decade, are well deserved,” Council Speaker Melissa Mark-Viverito said, starting off the hearing. Saying that the Council was adopting most of the commission’s recommendations, she said, “We diverged in one area: compensation for becoming full time and giving up the potential for outside income. The commission recommended no increase for this important reform. We disagree, and have proposed a modest increase to account for it.”

Some Council members were asking for an even larger salary increase, like Ydanis Rodriguez, who used the few minutes allotted for asking the panel questions to instead talk about how hard Council members work.

“That, I’m not in agreement with,” Mark-Viverito said to reporters when asked about Rodriguez’s remark.

Council members, commissioners, good government groups, and members of the Conflicts of Interest Board were all in agreement that Council members work hard, yet several Council members seemed defensive about the amount of work the position comes with. Council Member Chin added that the job is “more than full time.”

“Can we agree that the commission recognizes that the Council member works more than full time?” Rodriguez asked.

“We never received time sheets, so I can’t answer specifically, but in general, it was our impression…that absolutely you are working long periods of time,” commissioner Paul Quintero replied.

Speaking with press after his testimony, Schwarz expressed frustration with the fact that, though Council members spoke passionately of their need for better compensation and the hard work that they do during the hearing, not a single one had expressed that to the commission during its two public hearings.

“It would be far better for the public, for us, and for them, if they’d come to testify,” Schwarz added.

Dadey echoed that sentiment, telling members of the press after his testimony, “This is the problem with the process - there are a lot of legitimate questions to be asked of the Council and how they arrived at the numbers. And to get a committee report two days before the vote…this is being rushed way too fast.”

When asked about the rush to vote on the salary legislation, Mark-Viverito first said, “The timing is something we cannot control…I didn’t think delaying it any further was a good thing to do.”

After members of the press pointed out that it is entirely within the Council’s control to decide when to vote on legislation, Mark-Viverito added, “Based on conversations with members there is an interest to move on this issue.” It was a sentiment echoed by Council Members Brad Lander and Ben Kallos, who co-chaired the hearing and defended the Council's plans, citing the unprecedented reforms and the value in raising Council salaries so as to attract strong people to run for office.

Dadey, however, said he has “talked to many Council members and [has] not heard any of them say they wanted it to be rushed. Many of them have a problem with the quick process.”

Council Member David Greenfield, who gave up practicing law and the outside income he earned from it months ago, said he is “concerned” about limiting types of outside income, saying it “may dissuade people from going into government” and asked if the commission would support a cap on outside income.

Schwarz said the commission is against a cap, adding “every other city official since 1937 have not been able to earn outside income.”

There is a possibility that some last minute amendments may be added to the package of bills on the floor of the Council during Friday’s full-body meeting. Some Council members seemed to be expecting to put amendments forward.

Good government groups have urged the Council not to accept a raise until their next term in office, if re-elected. Mayor de Blasio will not take a raise this term. As Dadey pointed out, 37 Council members said, in response to a Citizens Union questionnaire, that they think pay raises should be prospective.

Yet it seems highly unlikely that the Council will follow through on that, as both the commission and the Council support the rationale that, since it has been almost a decade since the salaries of elected officials have changed, accepting a raise this term would be fair. The Council is changing the process for the future, though, so that raises are put into effect for the next class of Council members. The timeline in part relies on the Mayor calling a compensation review commission every four years as he or she is supposed to.

While questions remain, this round of pay increases and the connected reforms move forward. As Council Member Greenfield pointed out Wednesday, “Prior councils have taken the raises, but have never done the reforms. This is a big deal…for the first time ever we’re actually taking the raises but also making the reforms, and that’s huge.”

"Just to be fair,” Greenfield said, emphasizing the desire for credit that several Council members expressed, “the Council can do whatever it wants.”