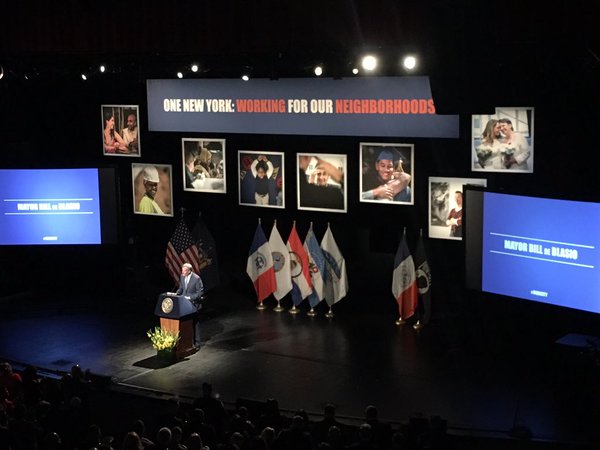 Strong neighborhoods are essential to a just city, Mayor Bill de Blasio argued from the Bronx Thursday evening, delivering his third State of the City address. De Blasio's speech was long on markers of progress and acknowledgement of the city's uniformed workforce, and included several new proposals ranging from the nitty gritty of city management to major innovations.

The theme of the speech, according to the mayor, was "one New York: working for our neighborhoods," and de Blasio made the case that the city is on the right track, while also outlining new ways in which his administration would improve conditions for New Yorkers, especially those living in long-forgotten places.

The banner items are plans for a streetcar along 16 miles of Brooklyn-Queens waterfront, the development of Governor's Island into a multidimensional attraction, and a new private sector employee retirement fund. These grander items came amid announcements about new efforts to scrub graffiti, prosecute gun dealers, and invest $91 million to revitalize Far Rockaway.

"So two years in, we are building one New York," de Blasio said after going through the highlights of his first two years in office: safer and smoother streets, lower crime, expanded worker benefits, a popular municipal identification card, universal pre-kindergarten and other education programs, and "the most ambitious affordable housing plan in the history of this nation" with strong initial progress.

"The changes we've made are working for our neighborhoods," he said, "and today, we are capturing the momentum of these first two years to push harder, to go farther."

As he often does, de Blasio fit nuts-and-bolts programs and so-called quality-of-life concerns into his overarching focus on creating equity in New York. He promised new health centers in underserved neighborhoods like the South Bronx, expanded WiFi access through sidewalk kiosks and broadband at public housing complexes, and more frequent cleaning of city streets.

The mayor got a thumbs up from business leaders. "Mayor de Blasio focused on investing in the city 's future, ranging from building new centers of innovation and economic activity to developing a novel transit connector between Brooklyn and Queens and creating a network of health centers serving the South Bronx," said Partnership for NYC President and CEO Kathy Wylde in a statement. "These are priorities that the business community shares – practical and achievable. They will contribute to the city's vitality and stimulate private investment."

Meanwhile, progressive lawmakers and advocates are excited about the retirement savings program, which the mayor will work on with City Council Speaker Melissa Mark-Viverito, Public Advocate Letitia James, Comptroller Scott Stringer, and others. City Council Member Ben Kallos, who helped develop the model for the program while working with liberal activist Bill Samuels at EffectiveNY, will introduce legislation so that "any New Yorker working at a business with ten or more employees to automatically enroll in a retirement plan."

Unfortunately for de Blasio, his State of the City address was sandwiched between the collapse of a deal he had orchestrated to reform the carriage horse industry and the shooting of two NYPD officers, who were shot during a patrol in a Bronx housing complex while de Blasio was speaking a few miles away. The mayor was quickly briefed after finishing his remarks and went to the hospital, where he and NYPD officials reported that both officers were in stable condition.

During his speech the mayor went to great lengths to praise the NYPD, as well as the other uniformed city workers: firefighters, correction officers, and sanitation workers.

This workforce is essential to a safe and clean city, de Blasio explained, adding that the successes in these areas made possible the city's vibrant economy and efforts to ensure that others would be able to share in the prosperity. Still, he promised continued efforts to bring police and community closer together.

"Now, if making New Yorkers safer is the first and foremost of our efforts to improve quality of life," the mayor said, "then helping New Yorkers get around our city swiftly and easily comes next." He then introduced measures to build the streetcar route - which is estimated to cost about $2.5 billion and be finished in 2024; allow people to pay for parking using a mobile app; and the expansion of bus arrival countdown clocks.

Canopied by talk of neighborhoods, de Blasio gave an almost block-by-block explanation of how he is leveraging the tools of city government to improve New Yorkers' lives. While the mayor's approval rating hovers around 50 percent, it is on a recent upswing, and notwithstanding a recent weekend trip to Iowa to campaign for Hillary Clinton, de Blasio appears to have gotten the message that New Yorkers want him focused on running the day-to-day operations of the city.

On Thursday, de Blasio said that his vision for a growing and fair city "means we need to manage government effectively for a safe, clean, economically strong city with an improving quality of life. And it means we must innovate for the future in all our neighborhoods, always pushing the envelope for new ways to keep New York the greatest global city of the 21st century."