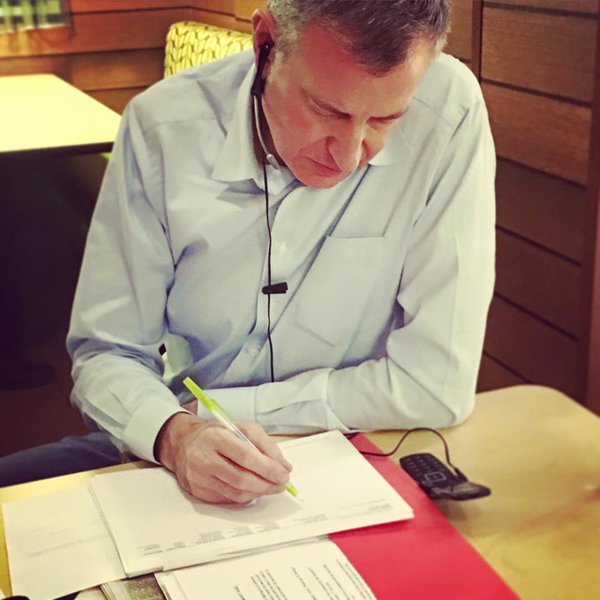 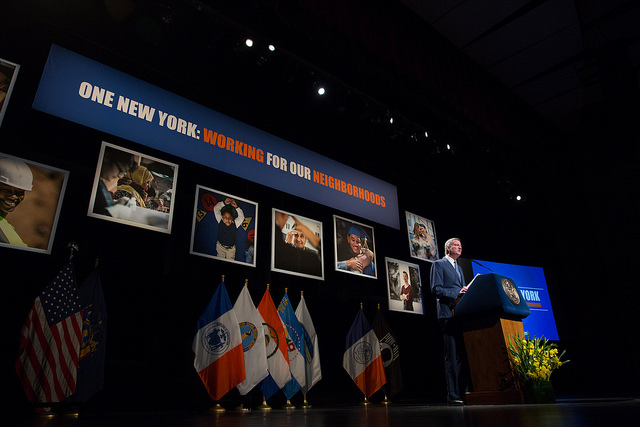 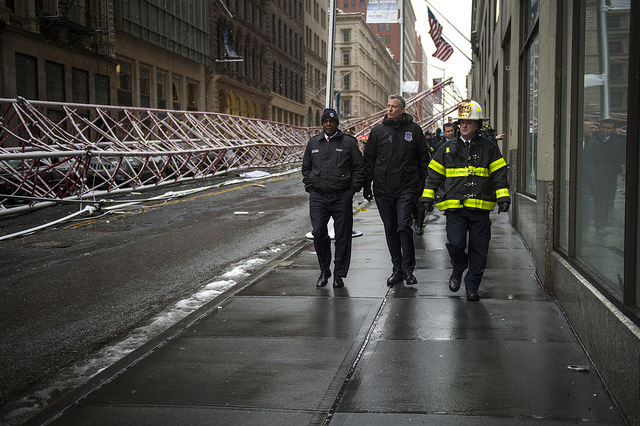 1. State of the City: Mayor de Blasio emphasized building strong neighborhoods and city management during his third State of the City address on Thursday, and focused on acknowledging the work of everyday New Yorkers and the city’s uniformed workforce, and improving conditions across the five boroughs. New initiatives highlighted during the speech include a streetcar running along the Brooklyn-Queens waterfront, development on Governor’s Island, a new private sector employee retirement fund, and a $91 million investment to revitalize Far Rockaway. [Read: De Blasio Stresses Neighborhood Health in 'One City' Vision & Muslim Immigrant Family of NYPD Captain to Lead Pledge of Allegiance at State of the City]

2. Council Votes on Raises, Reforms: On Friday, the City Council approved a package of legislation to raise the salaries of all the the city’s elected officials and reform how Council members are compensated. The reforms, including eliminating stipends for chairing committees and making the position full time, have been praised, yet the higher than recommended salary increase the Council is seeking and the timing of the vote have been criticized. [Read: Questions Remain as City Council Moves Ahead with Pay Raises, Reforms]

3. Critical Time for Housing Plan: On Wednesday, the City Planning Commission passed two major components of Mayor de Blasio’s housing plan, sending them to the City Council, which will hold two hearings on the proposals next week. The two proposals - Mandatory Inclusionary Housing and Zoning for Quality and Affordability - have received mixed reactions and aim to adjust the city’s zoning codes to allow what the administration says will be more responsible development. At the same time on the state level, calls for Governor Cuomo to move on new program to incentivize affordable housing production continue. [Read: Planning Commission Sends Mayor's Zoning Proposals to City Council & Calls for Public Discussion of New Affordable Housing Incentive Program]

5. Subway Slashings: In the wake of several separate slashings in the subways in January, Police Commissioner Bill Bratton announced Wednesday that the NYPD will now wake up sleeping straphangers. Transit crime was up 36 percent in January, according to Bratton. Speaking on Hot 97 radio, Mayor de Blasio said there is no pattern to the random attacks and pointed to an overall downward trend in crime.

THIS WEEK’S NUMBERS:
$148,500 is the new salary for City Council members, up from $112,500, and $10,185 higher than the $138,315 salary a commission tasked with reviewing the compensation levels of elected officials recommended, Gotham Gazette reports. (The salaries of the Mayor, Comptroller, Public Advocate, Borough Presidents, and District Attorneys will all increase too)

21,401 open code violations at homeless shelters around the city at the end of 2015, an overdue report released by Mayor de Blasio shows.

6.4% increase in the number of jobs in Brooklyn, Queens, Staten Island, and the Bronx from the end of 2013 through the middle of 2015, the Daily News reports.

$91 million will be invested to revitalize Far Rockaway, DNAinfo reports.

$2.5 billion is the estimated pricetag for a new streetcar that will run between Brooklyn and Queens along the East River, the Times reports.

89% of New Yorkers say corruption in the state government in Albany is a serious problem, according to the a Siena poll.

THE GLORY AND THE GOAT:
It was a good week for New York City’s elected officials, all of whom will receive at least a 12 percent salary increase after the City Council approves a package of legislation Friday that will enact the raises (although Mayor de Blasio will not accept a raise for the duration of his term).

It was a bad week for City Council Member Ydanis Rodriguez, who has been widely criticized after he called the $36,000 raise he and other Council members are about to get a “big compromise,” and insisted that they “deserved” to make $175,000. Rodriguez was also the sponsor of the horse carriage bill, which fell apart this week and has also been the source of much controversy.

Around this time 4 years ago, on February 2, 2012, 18-year-old Ramarley Graham was shot and killed by police officers in the bathroom of the apartment Graham lived in with his family. The officers followed Graham into his home from a bodega after they thought they saw Graham with a gun. No gun was found, and the officer who shot Graham had the manslaughter charges against him dropped. On the anniversary of Graham’s death, his parents delivered a letter to City Hall officials urging Mayor de Blasio to fire the NYPD officer who shot Graham.

Around this time 52 years ago, on February 3, 1964, 460,000 students refused to go to school in order to protest the segregation of New York City’s schools. Students gathered and chanted “Jim Crow must go!” in front of the Board of Education building, calling for immediate action to be taken to desegregate the schools.

Around this time 17 years ago, on February 4, 1999, West African immigrant Amadou Diallo was killed by police officers in the entrance of his Bronx apartment building after the officers mistakenly believed Diallo was the serial rapist they were searching for, and that he was reaching for a gun. Diallo, 23, had no gun and was in fact reaching for his wallet when four NYPD officers fired 41 shots, hitting him 19 times. His death sparked demonstrations against racial profiling and unfair treatment by the police. The four officers involved were eventually acquitted of all charges.

Muslim Immigrant Family of NYPD Captain to Lead Pledge of Allegiance at State of the City, by Samar Khurshid

What To Do When the L Train Closes, by Alex Armlovich (opinion)

The City's Next Steps to Ensure Vibrant, Creative Communities, by Adam Forman (opinion)

A Good Deal for Horses, by Allie Feldman (opinion)

To Eradicate Sex Trafficking, Prosecute the Pimps and Buyers, by Lauren Hersh (opinion)

Homeless Young Adults Can Fall through a Crack in Shelter System, by Genia Gould (City Limits)

MORE FOR THE WEEKEND:
Council Member Brad Lander spoke with Errol Louis on NY1 to explain raising Council members' salaries and to discuss the controversy surrounding it.

Dick Dadey, executive director of the government watchdog group Citizens Union, spoke with Brian Lehrer on WNYC about the package of legislation the City Council voted on Friday that will raise the salaries of all of New York City’s elected officials for the first time since 2006, as well as the controversy surrounding the larger-than-recommended salary increase for Council members and the timing of the vote.

Mayor de Blasio appeared on Hot 97 radio to talk about the presidential race, violence in the subway, the newly announced streetcar line that will run between Brooklyn and Queens, running for re-election, and legalizing marijuana.