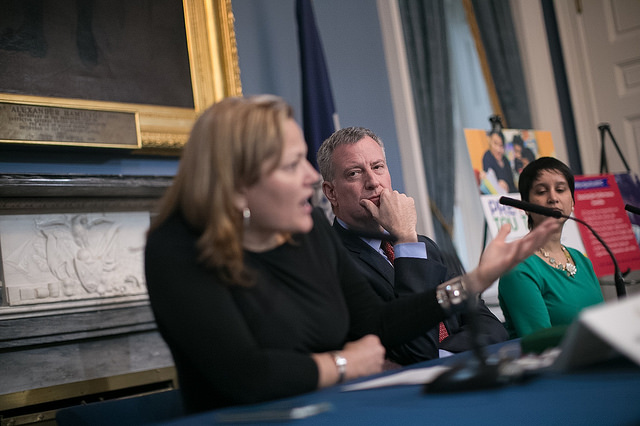 On Friday morning, Mayor Bill de Blasio will sign a package of legislation into law that will raise the salaries of all of the city’s elected officials, and reform the job descriptions of City Council members.

The City Council held only one public hearing on the bills and approved them without change two days later, just one week after first announcing the proposed legislation. While the Council is being praised for several good government reforms included, the lack of public input, rushed timeline, and size of the pay increase sparked criticism.

The salary increase for Council members goes beyond what an advisory commission recommended and what the mayor initially approved, yet de Blasio will still sign the bills. In the two weeks since the City Council’s vote, de Blasio has repeatedly side-stepped questions of the raises or process by pointing to the reforms included in the bills.

“As I’ve said, what the quadrennial commission proposed was some of the most profound reforms in terms of the City Council that we’ve seen in decades,” de Blasio said during an unrelated press conference Thursday. “This is the first time these reforms are actually going to be achieved,” he said. “I look forward to signing the bill.”

The reforms, which include making the position of Council member full-time and banning stipends for chairing committees, have earned the praise of good government advocates and elected officials, and even go a step further than what was recommended by the advisory commission that de Blasio empaneled last year as required by law.

However, both the legislative process and the higher-than-recommended salary bump for Council members have raised eyebrows.

When asked about the increase at a Thursday event held by the Center for Community and Ethnic Media at the CUNY School of Journalism, City Council Speaker Melissa Mark-Viverito said, “The commission did not take into account the value to the outside income [which the Council is virtually banning]. And that is why we went above the $138,000 recommendation to $148,000. We gave it a modest 10,000 value.” (Technically, the recommendation was $138,315, which the Council increased to $148,500.)

Yet, only three Council members currently earn significant outside income, and they will be grandfathered in until the end of their current term, while all Council members will get retroactive raises.

During the Feb. 3 City Council hearing on the raises and reforms, Fritz Schwarz, Jr., chief counsel at the Brennan Center for Justice and chair of the advisory commission, testified that the commission “did not recommend any additional bump in pay [for significantly limiting outside income]…considering the fact that only very few of the members here have an income that would be banned under the new law, and the grandfathering…no present City Council person is adversely affected by the change until the end of this term.”

The three-member advisory commission applauded the Council for choosing to enact reforms long sought by good government advocates, but said in their written testimony that at the time of the hearing, “the Council has not yet made its case for the proposed additional raise.”

Mark-Viverito also reiterated that she is proud of the reforms the City Council has chosen to implement, adding that the salary increases are naturally “going to jar people because...it’s been over eleven years” since a commission to review the salaries of elected officials has been convened. New York City law requires a commission be appointed every four years, yet until now, the salaries went unchanged since 2006. Former Mayor Michael Bloomberg refused to call a commission after 2006, citing the Great Recession.

When asked by WNYC’s Brian Lehrer on Jan. 29 whether he would sign a bill “with this little opportunity for public debate,” Mayor de Blasio did not give a direct answer, but instead said the bills are the result of a “very extensive process” with the advisory commission, and said he was “waiting to see all the details” of the Council’s proposal.

Though at that point, information regarding the package of legislation had already been sent out and the Mayor went on to describe the reforms, calling it “one of the biggest reform packages in terms of the City Council that we’ve ever seen.”

Lehrer then asked the Mayor if he would urge the City Council to make the raises take effect next term, something which good government advocates have called for in order to eliminate Council members’ ability to vote on their own raises.

“The commission did think it was appropriate for the pay raise to take effect this year - because it’s been almost ten years since this was dealt with,” Mayor de Blasio responded.

The raises - all at least 12 percent - for the city’s elected officials apply to the mayor, comptroller, public advocate, borough presidents, district attorneys, and City Council members. They will be retroactive effective Jan. 1 of this year. Yet, part of the reforms being passed include changing the process so that in the future, raises will go into effect the following term. Mayor de Blasio has promised not to accept a raise this term.