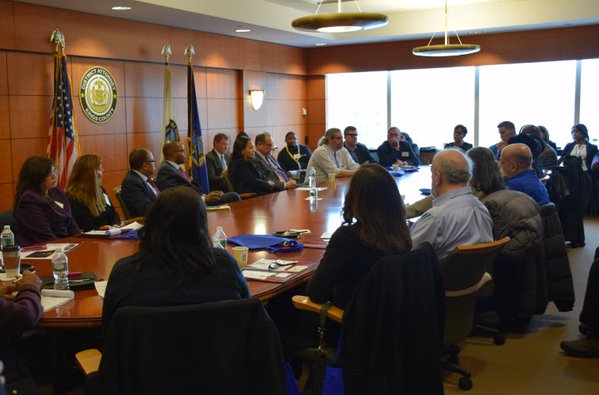 Some say you haven’t lived until you’ve been to a community board meeting in New York City. There’s no better place to find passionate hyperlocal debates over liquor licenses, sidewalk cafes, dog parks, and other matters of importance to neighborhood life.

Community boards, of which there are 59 across the five boroughs consisting of 50 volunteer members each, have some say in land use processes, but are also important training grounds for future City Council members and other full-time civic leadership positions. They are often stacked with longtime community residents who care deeply about their neighborhoods.

As another season for applying to community boards winds down, the need for continuing to reform the application and membership processes is part of the public discussion. There are bills in the City Council to install term limits for community board members, require each board to have a paid city planner for expert advice, and to pursue more information about member demographics to aid in making community boards more representative of their communities.

Borough presidents, who control the application processes and decide on board membership, each do things differently. While they’ve been modernizing the process, there is still more work to be done - good government groups and other reformers have a series of changes they would like to see implemented.

Community boards, which have existed in their present form since the New York City Charter was revised in 1975, are often considered the most local body of city government. To become a member of one of the 59 boards, a person must live, work or have another stake in the area represented.

For residents eligible to apply, this means an opportunity for civic participation and influencing some parts of the political process in a direct way. Community boards review land-use proposals in their jurisdiction, make recommendations for the city budget, and can enhance the delivery of city services.

“Community boards are the voice for the people of the city of New York in between elections,” City Council Member Ben Kallos, chair of the Council’s governmental operations committee, which has oversight of community boards, told Gotham Gazette. “It is our grassroots democracy and the closest thing we have to a monthly town hall.”

Along with 50 volunteer members, each community board has a small paid staff, led by a district manager. Members can apply for reappointment every two years - there are no term limits, something good government groups and Kallos have said needs to be changed. All members are appointed by borough presidents, though half are nominated by City Council members that represent the boards’ districts.

With the exception of Staten Island (all of the community board seats appointed by its borough president are full), each borough president has been reaching out over recent months to push constituents to apply.

Brooklyn Borough President Eric Adams has launched online applications for 2015-2016, and next year aims to make the process totally digital. “We’re going online to allow those who are tech-savvy - we want to focus on young people - to allow young people to become community board members,” Adams said on NY1’s Inside City Hall.

“In addition to reducing administrative costs, [Borough President Adams] believes that the move [online] will result in a larger pool of community board applicants, including from teenagers,” Stefan Ringel, Adams’ communication director, emailed Gotham Gazette. “Offering this opportunity in an easy-to-use way creates a bridge into community life for our neighbors to connect with one another for the local good.”

The increased attention toward teen-aged community board applicants and members comes after state law was recently changed to allow people younger than 18 to serve on the local boards.

Manhattan Borough President Gale Brewer’s office took the process online in 2015. In the application cycle that ended in January, Manhattan saw 527 new, non-incumbent applicants for its boards, a 9 percent increase from the previous year, according to a spokesperson for Brewer. And, 91 percent applied online.

To advertise the applications in Brooklyn, Ringel said Adams’ office plugged them at local meetings and that they sent email blasts to “thousands of Brooklynites, as well as engaging with our thousands of followers on social media.”

With a similar use of digital, Bronx Borough President Ruben Diaz Jr. has been reaching out to constituents via social media to engage them to apply.

“We have promoted the community board application several times on our Facebook pages, as well as through Twitter and Instagram,” said John DeSio, Diaz Jr.’s communications director, in an email to Gotham Gazette.

The Bronx borough president’s office, DeSio added, emailed the application to its contact lists and sent out a press release, both in Spanish and English.

Community boards can play a vital role in city politics. Their wide rejection of Mayor de Blasio’s plans to change zoning rules as part of his affordable housing plan was noticed by news outlets, City Council members and borough presidents, many of whom expressed similar concerns.

“Without the community boards, people wouldn’t have known and the City Council would not have known the impact [the plans] would have in the neighborhoods and how the people would feel,” Ebenezer Smith, district manager of Manhattan Community Board 12, told Gotham Gazette.

Smith’s board, which represents Washington Heights and Inwood, not only had problems with the administration’s citywide zoning proposals, but also voted down the proposed rezoning plan for the latter neighborhood. Still, community board votes on land use matters, while part of the mandated city process, are only advisory. Decisions still rest with the City Planning Commission and, ultimately, the City Council.

Though they can be effective at giving voice to local concerns, good government experts and some City Council members have advocated for reforming several aspects of community boards.

One bill, co-sponsored by Kallos, aims to institute a limit of six terms - twelve years - for new community board appointees (current members would be grandfathered into unlimited terms). The bill was laid over by the Council last year and does not appear to be nearing a vote.

“Since they are doing the work of looking at their neighborhoods to see what should be improved locally and what recommendations they want to make about land-use decisions, streetscapes, that kind of thing, we think that they should actually have professional advice,” Talia Werber, policy and research manager at Citizens Union, told Gotham Gazette.

In 2010, Citizens Union published a review of city government structures for the city’s Charter Revision Commission and made recommendations for community board reform.

“In New York City, where there is an ever-shifting demographic in every single neighborhood, we think it’s important that the community boards actually represent their neighborhoods and actually make sure to take into account the new perspectives,” Werber said.

The implementation of term limits could radically diffuse community boards, which often have members that have served on the same board for decades. As Werber explained, there are ways to avoid the negative effects of an influx of new members.

“There are ways to do succession planning, to have appropriate transitions of institutional knowledge,” Werber said. “So, whether that’s through training, certain trainings for new members or mentorship of existing members and new members, there are ways to sort of create a pipeline and make sure that institutional knowledge stays within the fabric of the community board, but also to make sure that no one gets too entrenched for that long.”

But the need for planning experts and term limits are just two of the ways that good government experts have recommended the boards be improved. Boards can also over-represent certain demographics in their districts at the expense of others, and they have been criticized for not publishing enough information about their members. This led to a recently introduced bill by Council Member Ritchie Torres calling for detailed surveys of community board members on everything from race to car ownership. The surveys would be voluntary and the results would be made public in the aggregate.

And, as borough presidents control the application process and training for their board members, New York City policy expert Stephen Miller* is among those who have recommended that both processes be standardized.

In addition to these reforms and others, such as the need for bigger community board budgets, Miller has also suggested that aspects of community boards - such as the appointment, rather than election, of board members and district remapping - be studied.

Like Werber and Miller, Council Member Kallos knows the workings of community boards well. Before becoming chair of the Council’s governmental operations committee, he was on Manhattan Community Board 8 for years and is now a non-voting ex-officio member, as all Council members are for boards in their districts. Two years ago, Kallos released a policy report about the bodies and identified some areas for reform.

Since then, according to the Council member, some positive changes have been made. “The borough presidents have adopted improved applications,” Kallos told Gotham Gazette, noting the switch to applying online. “We’ve seen applications go up on the community boards that I oversee and other members are overseeing.”

Aside from online applications, a possible reason for the enrollment increase is a state law passed in 2014 allowing 16- and 17-year-olds to serve on community boards. An increase in youth representation on the boards was recommended by Kallos in his report, and he co-sponsored a City Council resolution in support of the state legislation.

“We’ve appointed numerous 16-year-olds throughout the city,” Kallos said. “They’re bringing youth and energy to the boards, and they are our best and brightest.”

In April of last year, Kallos introduced a bill that would have required borough presidents to provide professional urban planning staff to community boards, a policy that advocacy groups have also endorsed.

“Since they are doing the work of looking at their neighborhoods to see what should be improved locally and what recommendations they want to make about land-use decisions, streetscapes, that kind of thing, we think that they should actually have professional advice,” said Werber of Citizens Union.

Like the term limits bill, this bill was laid over after a public hearing.

Torres’ community board reform bill is currently active on the Council floor and awaiting an initial hearing. Simply put, the bill would require community boards to publish information on board vacancies, attendance records, as well as demographic data in an effort to increase board diversity.

Kallos, a co-sponsor of the bill, has already seen its policies practiced by the community boards under his oversight. “It’s already being implemented by Manhattan borough president Gale Brewer and it’s really had a significant impact,” the governmental operations committee chair said.

Community board reform bills must go through Kallos’ committee, but in order to move they also must have the support of many Council members who may be worried about upsetting their local board members.

“I have great hopes for Council Member Torres’ legislation,” Kallos said. “I think transparency is good anywhere we can bring it.”

*Note: Stephen Miller is now an aide to City Council Member Jimmy Van Bramer. Miller wrote about community board reform before his employment at the Council and his work does not necessarily reflect the views of Van Bramer or the City Council.