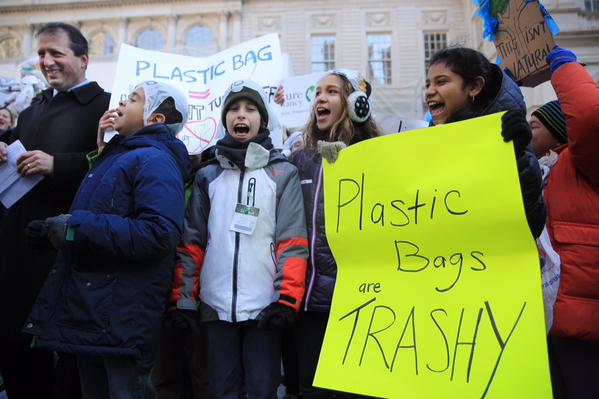 Even a year later, Lander is confident that the bill he is co-sponsoring with Council Member Margaret Chin to impose fees on single-use plastic and paper bags at grocery stores and bodegas will pass the Council by April 22, Earth Day. Lander, Chin, and their allies are making a renewed push to see the legislation pass, including making tweaks to the bill and gathering new support.

The bill, an effort to reduce the number of plastic bags that end up in the city’s waste stream, was introduced in March 2014 but has not moved since it was initially heard on Nov. 19, 2014 by the Committee on Sanitation and Solid Waste Management. While supporters call it an important environment-friendly measure, opponents say it will be cumbersome for families when grocery shopping and everyday people making quick purchases. Proponents cite the already underway increase in the use of reusable bags for shopping, while opponents say this is an unnecessary infringement into the private marketplace and people’s lives.

In order to become law, the bill must pass in committee and the full Council, then be signed by Mayor Bill de Blasio.

Now, in a 2016 effort that even involves support from state legislators, Lander, Chin, and others are pushing forward with the hope that by the time Spring rolls into Summer, de Blasio will have signed the bill into law. Currently, the bill has 21 Council sponsors in total, plus the support of Public Advocate Letitia James. It needs five more co-sponsors for a majority in the 51-member Council.

“As Spring starts to return to New York, people remember that plastic bags aren’t what’s supposed to bloom in trees, and it’s time for the city to adopt the fee and significantly reduce plastic bag waste,” Lander told Gotham Gazette. “I’m optimistic that we’ll get there.” Lander said that the bill is being changed slightly to be more effective as he and Chin respond to the issues raised at the initial hearing.

State Senator Brad Hoylman, who chairs the Senate’s environmental conservation committee, is paying close attention to the city bag bill, which he believes is a litmus test for any efforts the state might make to legislate on the issue. At an event at New York University on Feb. 25 co-sponsored by members of Congress, the State Assembly and Senate, the Manhattan Borough President’s office, and a number of Manhattan community boards, Hoylman and Council Member Chin discussed the proposals and the way forward.

Hoylman said New York City is setting the standard for the state. “The city is a good testing ground for how we might get this passed statewide,” he told Gotham Gazette after the event, “working with advocates and retailers on finding a formula that satisfies the goals of reducing use and not making it too onerous for the retail industry.”

But the struggle is likely to be even harder at the state level where the Democrats don’t have control of the Legislature as they do in the city (the Assembly is controlled by Democrats whereas the Senate is run by a Republican majority). Hoylman, a Democrat, said the Senate majority “typically opposes” legislation like the plastic bag bill. But he isn’t giving up hope that the Democrats could turn things around in this year’s election cycle, when all 213 seats in the Legislature are on the ballot, and perhaps pass a bill next year.

Hoylman is partnering with Sen. Liz Krueger, another Manhattan Democrat, to draft policy to be introduced, but only once New York City moves ahead with its bill. “We’ll see how the negotiations go at the city level and see what they end up with,” he said.

A number of environmental advocates attended the event, along with representatives from Senator Krueger’s office and State Comptroller Thomas DiNapoli’s office in the audience. Jenny Romer, founder of plasticbaglaws.org and an advocate of bag fees and bans, spent close to an hour explaining the issue and discussing parallel efforts in other cities, some of which have been successful.

In New York City, the opposition to the bill has been fierce from those in the plastics industry who say it will do little to curb waste, that reusable bags will spread harmful bacteria and, most significantly, that it is a “tax” which will hurt low-income people. This opposition has come from within the City Council, too. (Under the bill, SNAP and WIC enrollees would be exempt from paying the fee.)

A number of groups came out against the bill, including the American Progressive Bag Alliance, which represents the plastics industry trade association, the Society of the Plastics Industry. APBA chairman, Mark Daniels, who also works with Novolex, a plastic bag manufacturer and recycler, testified at the February hearing. “The reality is that taxes and bans on plastic bags will fail to solve any environmental problem, turn people towards inferior options and jeopardize good American jobs, including those right here in New York City,” he said.

Council Member David Greenfield called the proposal “outrageous” at the hearing. He stressed the impracticality of carrying dozens of reusable bags to the grocery store and said low-income families would be worst-affected by the bill.

Minority Leader Steven Matteo, one of three Republican members of the Council, was more direct in his words. “If it looks like a tax, smells like a tax, feels like a tax, it’s a tax, and it’s a tax that is hurting our constituents and our businesses,” he said at the hearing.

In trying to win over a “handful” of her colleagues, Council Member Chin said at the event at NYU that supporters are considering lowering the proposed fee from 10 cents to 5 cents per bag, and that it might make the difference in getting majority support for the bill.

“That’s one of the big ones,” she said of the possible amendment, which might be among a few changes made to the bill. “I think so far, we’re trying to get everything together, and we want to have Earth Day as the day to finally make it happen.”

Recently, concerns were raised about Chin’s use of public money to fund outreach efforts about the bag bill through a non-profit, the Citizens Committee of New York, which is a registered lobbyist with the city. Lander dismissed the charges as a "hatchet job."

Mayor de Blasio is in favor of the bill’s intent -- reducing bag waste -- but has stopped short of outright support for the measure. “Well, that’s something we’ve been talking to the Council about and I’ve said that we share the goal of addressing the problem of plastic bags,” he said in response to a question from Gotham Gazette at a news conference on Feb. 1 where he announced the CleaNYC program, which includes increased graffiti-removal efforts, sidewalk power washing, and stepped-up litter basket collection on Sundays and holidays.

“This is a real environmental problem,” he said of the roughly 100,000 tons of plastic bags that New York City disposes of annually. “There are still some issues being worked through on the best way to do it, but, you know, when there are two parties who agree on the goal it’s just a matter of time of figuring it out the best way to get it done. And I’m pretty confident we’ll get there.”

This article has been changed to include the correct dates that the bill was introduced and heard in committee.