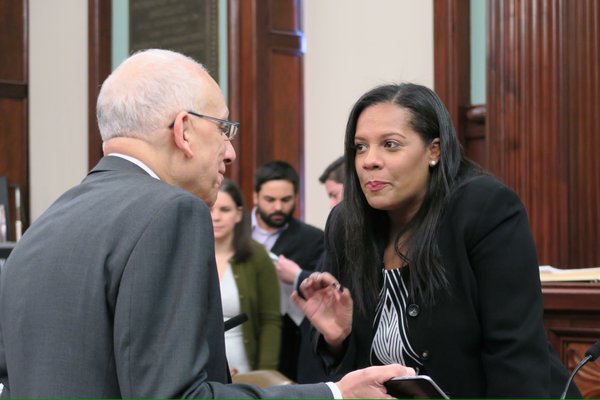 Throughout the proceedings, two main themes emerged: concerns over what Governor Andrew Cuomo’s state budget proposal means for the city and the extent to which the de Blasio administration is saving in anticipation of an economic downturn. There were also a series of specific budget issues and priorities raised by Council members throughout hours of testimony that first featured de Blasio budget director Dean Fuleihan.

The hearing kicks into full gear the process of negotiating the city’s spending plan for fiscal year 2017, which begins July 1. As Council hearings proceed over the next month, different issue committees will hear testimony from agency commissioners, leading to the Council’s official response to the mayor’s preliminary budget. Their response is due by March 30.

Finance Committee Chair Julissa Ferreras-Copeland, in her opening remarks, clearly emphasized her belief that the city needs to find ways to reduce costs and increase reserves, and that the biggest fiscal challenge now facing the city is Gov. Cuomo’s proposed budget, which cuts nearly $1 billion from New York City funding.

Ferreras-Copeland noted that though the governor has insisted the proposed cuts to Medicaid and CUNY funding “won’t cost New York City a penny,” he made no changes in his recently-released 30-day amendments to the state budget released on Feb. 12. Still, Mayor de Blasio has not taken those cuts into account in his budget, which raised several eyebrows at Tuesday’s hearing. De Blasio and his top officials have insisted that they will hold Cuomo to his word, though no discussions have yet occurred wherein the two sides can work to find the “efficiencies” that Cuomo is demanding.

Ferreras-Copeland acknowledged that Mayor de Blasio’s preliminary budget, released on Jan. 21, put forth many progressive proposals, but warned that the city must brace for a possible economic slowdown. As she has in the past, Ferreras-Copeland indicated that she does not believe the administration has a strong enough savings program in place.

“With the recovery from the Great Recession continuing into its seventh year, the city must ensure that it is prepared for the next financial downturn that will inevitably come,” Ferreras-Copeland said. “To be clear, the city is not forecasting a recession and in fact predicts continued - if moderate - growth. But, in order to be prepared and fiscally responsible, the City must take steps now to build up its reserves and find efficiencies where money can be saved.”

Preliminary budget estimates put city reserves at $6.6 billion, compared to the $11 billion before the Great Recession ($7 billion was used to pull the city out of that downturn.) The $6.6 billion also marks a percentage of city spending far short of what watchdogs recommend. The plan also includes $1.8 billion under the Citywide Savings Program, which was created by the mayor to find voluntary savings in city agencies. Last year, the CSP savings were $3 billion.

“Not only is this amount low relative to the size of the budget, but most of the savings in the plan appear to stem from accruals, delays in spending, and other non-recurring savings – raising the question of whether these savings find real efficiencies, or whether they are just a more accurate reflection of true costs,” Ferreras-Copeland said.

Fuleihan did announce publicly Tuesday that he and his Office of Management and Budget had sent out a letter on Monday calling on all agencies to find savings across the board without reductions in services or relying on new fees, fines, concessions or making any layoffs.

“Agencies will be required to find productivity and management improvements by restructuring the delivery of programs or services, using technology to produce efficiencies, improving revenue collection, reducing administrative and overhead costs, and funding underused programs at the appropriate levels,” the letter stated.

Ferreras-Copeland said the letter was welcome news. She also laid out at least $20 million in savings identified by the Council and said that the Council would continue to look for savings as it goes through budget documents and hosts agency commissioners at upcoming hearings, which continue Wednesday.

Echoing Ferreras-Copeland, Speaker Melissa Mark-Viverito noted that the Council would have to build on its reserves. “I believe the mark of a true progressive is not just one who seeks to create change but does so in a manner that is sustainable over the long term,” she said. Mark-Viverito also said the proposed state budget could have “serious consequences” for the city’s budget, but shouldn’t stop city officials from negotiating the budget.

“We can and should discuss the financial repercussions of these proposed state actions,” she said, “but we should not let it distract us from the task at hand.”

Council Member Jumaane Williams was quite direct later in the hearing, saying the city shouldn’t take Gov. Cuomo on his word and needs to have a contingency plan for its budget. Ferreras-Copeland called the lack of such a plan “unsettling.”

OMB Director Fuleihan repeatedly stressed that the city will fight for its interests as the state continues its budget process - the state fiscal year starts April 1. Fuleihan emphasized that the FY17 financial plan is a “highly responsible budget” that makes targeted investments, establishes $1.1 billion in new savings and maintains “unprecedented reserves.”

Fuleihan said he shared Ferreras-Copeland’s and Mark-Viverito’s concerns. He also stressed the challenges stemming from increased pension costs and from federal funding cuts necessitating changes in the city’s healthcare system.

He laid out the major new investments from the preliminary budget -- including $115 million for the $15 minimum wage for city employees and contracted workers, investments in public safety, funding education initiatives under the mayor’s Equity and Excellence agenda, investments in transportation and social services, along with a few Council priorities. He said the budget recognizes “the very real and concerning economic signals” from around the country and the world and “reaffirms our mutual commitment to discipline, responsibility and meeting our challenges head on.”

Although Fuleihan agreed with the Council on the need for more savings, he said the city’s reserves, which will be just under 7 percent at the end of Fiscal 2016, are at the “right level” for the city’s present needs.

Both Comptroller Scott Stringer and Ronnie Lowenstein, director of the Independent Budget Office (IBO), testified that the city’s reserves are insufficient to weather an economic downturn and called for a more robust savings program to boost reserves.

Lowenstein said “even for a modest downturn” the city only has enough in reserves to get through the following two fiscal years after a downturn begins. However, Lowenstein cautioned that it may be quite difficult for the city to put more into reserves if the governor’s proposals requiring additional spending from the city are enacted.

Stringer reiterated his call to for every agency to strive to identify savings, pointing out that “agency efficiencies make up only 30 percent of total savings in the first two years of the [five-year] plan.”

Regarding the letter sent by OMB instructing all city agencies to find savings, Fuleihan said that the savings will certainly happen. “We’re working with you,” Fuleihan told Council members, “this year we’re going to do savings in the executive budget.”

Although the city’s finances are in good shape overall, several economic risks lay on the horizon. Most pressingly, Cuomo’s proposed cuts, but also signs of trouble on Wall Street and from international markets, including China.

Upstate legislators “think New York City is a piggy bank,” Stringer testified. “But let me set the record straight - the city is facing real budgetary challenges and, as we know from recent history, our economic path can turn quickly.”

Yet another move is brewing in Albany that could cost New York City roughly $1 billion if approved - the proposal put forward by state legislators to impose a 2 percent property tax cap on New York City.

Mayor de Blasio’s decision to aid the city’s struggling public hospitals, known as NYC Health + Hospitals is another issue that must be addressed when the executive budget is released in late April or early May, something Fuleihan acknowledged in his initial testimony.

NYC Health + Hospitals is the “largest identified risk,” Stringer said, as “the city’s public hospital system is required to reimburse the city for debt service, medical malpractice claims, and fringe benefits costs incurred on the system’s behalf. But NYC Health + Hospitals has only made the full payment once in the last four years.”

And as Lowenstein of IBO stated, the mayor is forgiving $337 million owed by NYC Health + Hospitals, but has also chosen to maintain the city’s $204 million annual match of a “federal funding stream, even though the federal dollars are expected to decline because of changes in the health care payment system.”

Additionally, as Jacques Jiha, commissioner of the Department of Finance, said during his testimony, “there are some economic risks ahead that could affect city tax collections: stock, bond, and commodities markets are flashing warning signs...the economic situation is not as severe as in 2008, but it is very worrisome.”

During the initial three hours-plus of the hearing, Council members took turns questioning Fuleihan, seeking answers mostly about issues germane to committees they either chair or serve on.

Council Member Brad Lander asked about how the $15 minimum wage for city employees and contracted workers would be implemented and then moved to homeless shelters, saying they were perpetually under-budgeted. Lander said the 15 percent reduction in the homeless shelter population predicted in the preliminary budget was unrealistic, to which Fuleihan replied the city will decide on a more appropriate projection when the 90-day review of the Department of Homeless services concludes two weeks from now.

Analysis submitted by the IBO predicts that in 2017, city-funded spending to shelter homeless families and adults will cost $101 million more than currently budgeted under the mayor’s plan.

Stringer reiterated his call for money spent on homelessness to be spent more effectively, given that the city will spend $1.7 billion on shelter operations and homelessness programs this year across three agencies - a figure that has grown 46 percent in the last two years.

“We have to track the results of that spending,” Stringer said. “For $1.7 billion each year, our shelter system should not be rife with violations and substandard living conditions. We need to ensure that every dollar is used to efficiently and effectively, to serve the 58,000 men, women, and children who sleep in our shelters every night.”

Minority Leader Steven Matteo, head of the Council’s three Republicans, first addressed property taxes, which he wants to see reformed, then wondered about the costs of the city’s pension obligations and when they would be fully met.

Because retired employees are now living longer, the city’s pension contributions have needed to increase by about $600 million annually beginning this year. Fuleihan testified that the pension system is currently “71 percent fully funded,” and the city is on track to have the pension system fully funded by 2032.

Council Member Helen Rosenthal, chair of the contracts committee, directed questions to Fuleihan on the feasibility of reinstituting the Central Insurance Program which would allow workers contracted by the city to buy health insurance at lower rates and using the CIP to meet federal guidelines for overhead on city contracts. She also asked about irregularities in NYCHA security contracts and transparency with Department of Education contracting.

Williams pushed for increased funding towards the Summer Youth Employment Program, in effect doubling what the city has promised so far, a concern echoed by Council Member Laurie Cumbo and Ferreras-Copeland.

Cumbo, as chair of the women’s issues committee, wanted to know what the city was doing to invest in women’s safety.

Council Member Mark Levine commended the administration’s funding towards legal services for tenants in housing court and inquired about how much the city saves down the line from anti-eviction services. He also brought up the issue of infrastructure needs in upzoned neighborhoods.

On most of these specific issues raised by Council members, Fuleihan was non-committal, largely listening and expressing that he understands Council members’ concerns.