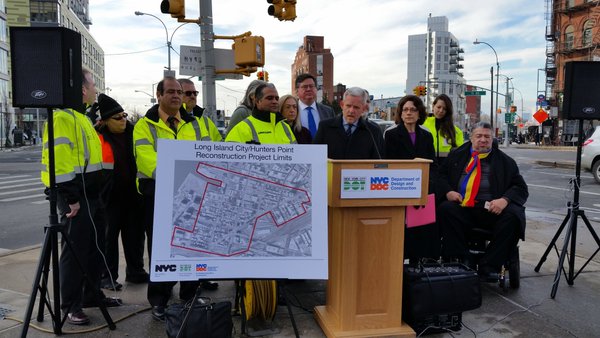 A bill set to be introduced before the City Council on Wednesday seeks to codify the Department of Transportation’s data tracking under Vision Zero, the city’s program aimed at eliminating traffic fatalities and injuries.

Two City Council members who have been integrally involved in the city’s rollout of Vision Zero, Jimmy Van Bramer and Ydanis Rodriguez, will introduce legislation to mandate DOT’s Vision Zero View portal, an online interactive map that displays data under the program. The Council members seek to ensure an expansion of public data on street safety and that it remains available well beyond the current administration.

One of Mayor Bill de Blasio’s top priorities, Vision Zero legislation was signed into law beginning in June 2014 and has been successful in reducing traffic crashes across the city through increased investment in infrastructure, changes to and stricter enforcement of traffic laws, and outreach and education. With traffic fatalities down by 22 percent since before the plan’s implementation, city officials declared 2015 the safest traffic year in the city’s history. 2014 and 2015 marked the first time that traffic fatalities declined for two consecutive years. In January, the Mayor released the Vision Zero Year Two report and announced a $115 million in capital investment to boost the program.

“We are serious about saving lives,” the mayor said at the announcement. “Vision Zero is working. Today there are children and grandparents who we might have lost, but who are instead coming home, safe and sound, because of these efforts. This progress is just the beginning, and Vision Zero is going to move ahead with even more intensity in the coming year.”

While the DOT already tracks detailed data, including fatalities and crashes over time and by district, information on street design, and locations of outreach efforts, displaying this data through the online portal is voluntary. “If times change, and administrations change, something that is created willfully can just as easily be taken away,” said Van Bramer, a Queens Democrat and longtime Vision Zero advocate who has stood with Mayor de Blasio at the bill signing two years ago and other related announcements. Rodriguez has also been an active proponent of Vision Zero. He chairs the transportation committee of the Council, which will hear the bill.

This new bill is an effort, Van Bramer said, to “speed Vision Zero along to achieve it even faster.” The idea is that with more data, especially publicly available and mapped, policy-makers and others can continue to target problems and further reduce crashes, fatalities, and injuries.

Not only would the proposed legislation mandate that data be published each month, it also expands the types of data made available. This would include the date, time, and location of accidents; the age and category (motorist, passenger, pedestrian) of the persons involved in each incident; the type(s) of vehicles and the type of collision (rear-end, front-end, etc.); the contributing factors leading to the crash (drugs, alcohol, bad weather, distracted driver; right of way); speed limits of all streets; and expanded reports on outreach efforts.

Most of this additional data is collected by the NYPD as well as DOT. “Our bill requires it to be reported publicly,” said Van Bramer. “People armed with that information,” he added, “can make changes that can keep their communities safe.”

“I hope it’s a first step in enshrining Vision Zero as a bedrock policy to guide the design, management and enforcement of New York City streets,” he said.