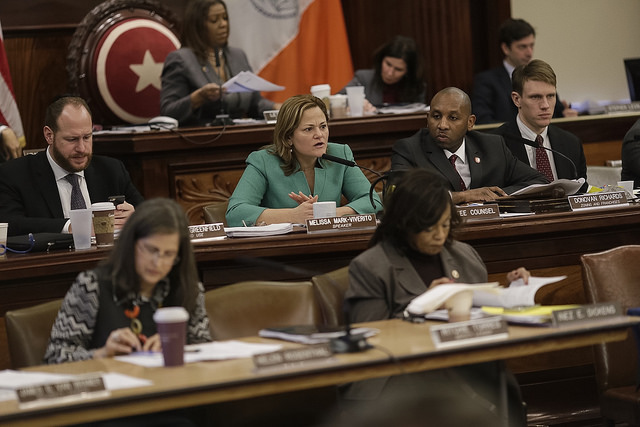 Last week, the City Council’s finance committee voted to increase the Council’s operating budget for fiscal year 2017, which begins July 1, by $3.1 million, bringing it to a total of $64 million, a five percent increase over last year’s adopted budget. Each year, the Council is able to determine its own budget and insert that number into the Mayor’s Executive Budget.

The increase was to be expected, with necessary adjustments for the 32 percent raise in Council member salaries, from $112,500 to $148,500 annually, that was passed last month. It also takes into account a bump in funding for Council members to run their offices -- for rent, staff salaries, and other general expenses. Most Council members will now receive $441,000, up from $384,000 last year, in operating funds. (The Speaker provided a $25,000 increase last month, coinciding with the Council member raises, both retroactive to Jan. 1; and another $32,000 has now been added for fiscal 2017.)

But, in adjusting, readjusting, adding to, and subtracting from different sections of its budget, the Council has given little clarity, if any, about how the pay raises were retroactively provided, why a few Council members receive more office funds than most others, and how Council Speaker Melissa Mark-Viverito was able to provide a $25,000 increase in office budgets to all members in February, mid-way through the fiscal year. This increase, aimed at allowing members to increase salaries for their aides, coincided with the Council voting through its own raises, though Council sources say that it was simply coincidental.

A Council spokesperson declined to provide further clarity about the shifting funds, but it is clear that, as usual, the Speaker has access to pots of money to be used at her discretion. Budget watchdogs say this is to be expected and that executives should have flexible funds, but that clear and open accounting is paramount.

“You want to give the Speaker the flexibility to be able to respond to needs that may change throughout the year, but there needs to be back-end transparency and accountability on how those funds are spent,” said Dick Dadey, executive director of Citizens Union, a government reform group. “If there’s vagueness at the beginning, there needs to be clarity at the end.”

Dadey noted that the significant changes in the Council’s compensation structure necessitate transparency on the source of funds and an explanation of what programs or expenses might not have been incurred as a result of moving those funds to pay for salary increases.

It isn’t clear how much flexibility is actually built into the City Council budget. Adjustments are made over the course of the financial year and the Speaker does move money around, but it’s not always evident where the money comes from, or how it is allocated initially.  It is true, like with the larger city budget, that spending appropriations are accounted for in the end, with expenditures available to those seeking that information.

City Council operating budget documents show a somewhat complex picture. In the $64 million budget just adopted by the finance committee and voted through by the full Council, $49.2 million was allocated to Personal Services (PS), up from $44.9 in last year’s adopted budget. The funds for Other Than Personal Services (OTPS) decreased by about $1.25 million, from $16.2 million to $14.8 million.

In that PS increase, about $2.9 million more is allocated for Council members to spend on personnel. On the face of it, this is good news for the aides who will be paid higher salaries. But the budget doesn’t specify how many aides individual Council members employ or how that money is distributed. It’s likely the $2.9 million came from the increase in Council member office budgets - $57,000 more for each member than the Fiscal 2016 adopted budget. The OTPS allocation for Council members decreased by about $57,000 in total, staying fairly level.

The PS allocation is divided by Council members, committee staffing, and the council service division. The Council members allocation needed a significant increase to the pay raises. Meanwhile, in the Council Service PS funds for the Speaker’s office, there is a drop of more than $500,000, even though there is only one fewer employee than last year - this could simply be because expected hiring did not occur. Most categories of Council committee staff and services that lost employees saw a reduction in budget, which corresponded with redistribution across other categories. A Council spokesperson did not provide an explanation for this $500,000 shift.

Also included in PS funding is an increase in appropriation for the Council's new bill drafting unit, which began in 2015 after being created through the Council's 2014 rules reforms. Funded initially at about $695,000 in fiscal 2016, the bill drafting unit is now up to about $860,000. There is also an increase in the PS funds toward Public Tech, which is now being allocated about $715,000 after $347,000 in fiscal 2016. This increase may be related to the Council's new "labs" website.

In the OTPS portion of the budget, there is even less clarity. The OTPS for Council Central Staff is a lump sum appropriation of $9.4 million, down from $10.6 million last year, but projected spending is itemized. Still, there is wiggle room for moving funds around.

Three allocations for contracted professional services seem particularly puzzling. In last year’s budget, the allocation for professional legal services was $500,000, for professional computer services it was $523,500, and then, finally, the third and rather vague category ‘Professional Services - Other’ received a $564,000 allocation. These items, this year, were set at $150,000 for each of the first two, and only $64,000 for the third. Under the same appropriation, Office Equipment Maintenance was budgeted with $250,000 last year and only $65,000 this year. Again, given several days to explain the differences, a Council spokesperson was not willing to do so.

Maria Doulis, vice president of the Citizens Budget Commission, a nonpartisan budget watchdog, acknowledged that the Speaker has flexibility with Council spending under her control, and did not take issue with it. “If you think of the Speaker as an agency commissioner then she’s got a lot of discretion to manage her agency budget.”

Doulis believes the Council budget changes are more or less innocuous in the grand scheme of the $82 billion city budget and that a number of considerations, some perhaps political, go into the allocations. But, she sees these as standard operating procedure and said the current Council and Speaker have been “pretty good about pushing for more transparency.”

“In the general budget, if we got as much detail, that would be super transparent,” she added, comparing the Council’s accounting of its budget to the larger city budget.

The Speaker’s office, however, did not have answers to any lingering doubts. “I don’t have those answers,” said Robin Levine, a Council spokesperson, in response to Gotham Gazette’s queries on these issues.

Asked last week about the increases to the Council operating budget, Mark-Viverito explained that not only did the Council have to allocate the pay raises they recently passed, but that she has been making sure that the Council can “fulfill our functions effectively.” To do so, she said, “we need to ensure that we have the proper staffing and resources.”

“Prior to my becoming Speaker,” Mark-Viverito added, “the Council budget had been deprived over the years, and we had a lot of correction to do, beefing up the Council to really be a professional body, where we had staff in the legislative body, the finance staff, to really do our work effectively.”

Note: this article has been edited to include additional information on Council bill-drafting and public tech allocations after further examination of the Council budget.