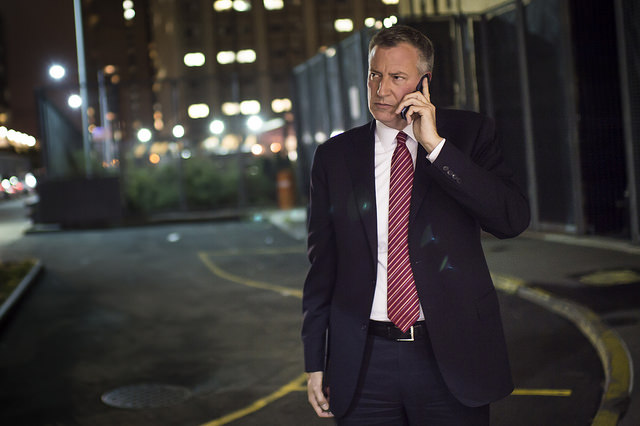 Mayor Bill de Blasio said on Monday afternoon that he has been in regular contact with Assembly Speaker Carl Heastie and that he spoke with Governor Andrew Cuomo earlier in the day, but that he did not gain much clarity as Albany budget negotiations enter their final days.

A new state budget is due by midnight Thursday, with the state's fiscal year beginning Friday, April 1. There are several areas of budget concern for de Blasio and others who represent New York City, including Heastie. On Monday, de Blasio repeatedly cited Heastie and the Democratically-controlled Assembly as essential allies in the fight to protect city interests throughout negotiations.

At an unrelated press conference at 1 Police Plaza, Gotham Gazette asked the mayor what he is watching for as state lawmakers negotiate the final details of a $140-plus billion budget. While expressing frustration about the lack of clarity, de Blasio said, "What I can tell you for sure, I've spoken to Speaker Heastie today and yesterday. He has, and the Assembly has, consistently supported the interests of New York City."

It appears that de Blasio and others are again depending on Heastie to be the strongest defender of New York City during "three men in a room" negotiations with Cuomo and Senate Majority Leader John Flanagan, a Republican.

"I spoke to the governor this morning, and I still don't have real answers," de Blasio said Monday. "There's no budget language."

Cuomo's Executive Budget, unveiled in January, caused concern for de Blasio on several fronts, including hundreds of millions of dollars in proposed CUNY and Medicaid cost shifts to the city. The governor also upset de Blasio by proposing a new layer of state approval in the process by which the state allocates federal affordable housing bonds to the city, among other measures de Blasio and his allies have been fighting.

"[T]here have been voices speaking out since February saying that the city should not suffer cutbacks when it comes to CUNY and when it comes to Medicaid," de Blasio said Monday. "We shouldn't have our affordable housing efforts undermined by needless bureaucracy. We should get more support in our efforts to end homelessness - these issues have been talked about now for months and months."

"This is supposed to be one of the decision days," the mayor added, referring to the fact that state budget bills would need to be printed Monday in order to have the required three-day aging period so that they can be voted on and passed by Thursday night's deadline. No deal has been reached, no bills were printed, so the governor is likely to issue "messages of necessity" to waive the aging period. Cuomo has prided himself on leading a new era of on-time budgets and more functional and responsible government.

The governor told reporters on Friday that he is reluctant to use messages of necessity, but that he does when needed. While the governor, whose tenure began in 2011, has indeed shepherded through on-time budgets (last year's was technically late by a few minutes), state government remains dogged by corruption scandals. Last year saw both legislative leaders convicted on federal corruption charges in separate cases.

Cuomo, who vowed to clean up Albany and has not been able to, unveiled an aggressive ethics reform plan in his January State of the State address, but has said little about it since and all parties have indicated that ethics will not be part of the budget.

Asked about whether he is troubled that ethics reform won't be taken up in the state budget, de Blasio said Monday, "I want to see ethics reform in Albany." Citing "public financing of elections and obviously a lot more disclosure," de Blasio said state lawmakers must act, but he cut Cuomo, Heastie, and others slack in terms of when. "Whether it happens now or it happens in the legislative session is less important to me than the fact that it needs to happen," de Blasio said.

On more urgent budgetary matters, after months of questions Cuomo's office said last week that it was tabling the CUNY cost shifts, but that it would be appointing a monitor to find efficiencies in the joint city-state system. It was a message met with some relief at City Hall, but de Blasio still said Monday that he wants to see budget language.

"There's no confirmation or guarantees related to CUNY, related to Medicaid or any of these other issues," de Blasio said, sounding at least a little frustrated. "And the things I talked about back in February when I gave my budget testimony in Albany, I talked about the fact that the State was going to take away some of our sales tax revenue in a way that we thought was arbitrary and unfair, and now things have been resolved on that front. So I want to see action, and I want to see real language that we can take to the bank right now."

A spokesperson for Governor Cuomo declined to comment in response to de Blasio.

On other issues of concern to the mayor, it appears both mayoral control of city schools and a renewed property tax break to incentivize affordable housing development will have to wait for the legislative session after a budget is settled.

The governor proposed a three-year extension of mayoral control, which expires in June, but Senate Republicans have rejected both that proposal and the Assembly Democrats' call for a longer extension. Last week, the Senate announced it would be calling de Blasio to testify at two May hearings on his education leadership.

There's been almost no talk of a new 421-a program, or something like it, to spur affordable housing development through tax abatements. The expiration of the previous system is one of the key sources of tension between de Blasio and Cuomo.

In Albany, de Blasio has had to rely on Heastie, the Bronx Democrat thrust into the Speaker's chair last year when Sheldon Silver was indicted on the federal corruption charges that led to his conviction.

On Monday, de Blasio credited Heastie and other Assembly Democrats for sticking up for the city, as Silver was infamous for doing. The Assembly, de Blasio said, "fought hard to make sure that there would be no cuts to our budget in terms of CUNY and in terms of Medicaid; there would be nothing that would stand in the way of our efforts to create affordable housing. The Assembly and its one house bill went out of its way to say the State would have to do more to help us deal with homelessness. So the Assembly has been very consistent."

Once de Blasio sees the details of the state budget, he'll have to adjust his city spending plan for fiscal year 2017 accordingly. De Blasio's preliminary $82 billion spending plan, which did not account for the CUNY and Medicaid cost shifts, is in the midst of a series of City Council hearings. The city's fiscal year begins July 1.

Further north, Heastie said a few words Monday to reporters trying to find out how the closed-door budget negotiations were going. "Albany is the art of the compromise," Heastie said in the capital on Monday, adding that the big-ticket items of minimum wage and paid family leave are being debated. Cuomo's two major policy priorities - both of which de Blasio supports - have taken center stage, though many other smaller issues could become part of a larger compromise by the time the budget is announced.

"I think in some regards we are able to move forward," Heastie said, "but there's still some outstanding issues about how the City of New York comes out of this."