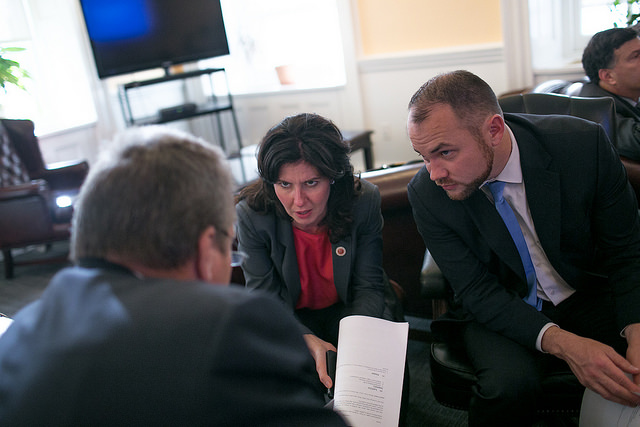 On Thursday, the City Council approved a bill requiring the Department of Small Business Services to survey and study the gender, ethnic, and racial makeup of executive-level staff and board members of companies that contract with the city. The bill, co-sponsored by Council Members Elizabeth Crowley and Darlene Mealy, came about while the two were co-chairs of the Council’s Women’s Caucus, and is an effort to “promote transparency,” Crowley says, and to gather information needed to make the city’s workplaces more equitable.

“This legislation is not only fair and smart, it promotes opportunity,” Crowley said in a press release following the Council’s vote. “Diversity matters in the corporate world and also impacts the bottom line. Studies have proven that diversity improves financial performance, with greater economic growth, increased productivity and increased profitability. This bill promotes diversity on boards and amongst senior-level staff, which benefits employers and makes a stronger, better New York City.”

Crowley and Mealy worked with organizations that advocate for diversity in the workplace to develop the bill, including Catalyst, a nonprofit organization that promotes inclusive workplaces for women. During the full Council vote, Crowley framed the bill as a means to help achieve greater equity for women in particular, calling the lack of women in board rooms something that is “more than an injustice to women - it’s actually hurting bottom lines.”

Recent studies show “that companies with more diversified boards do in fact yield better returns,” said Council Member Dan Garodnick, chair of the Committee on Economic Development, which unanimously approved the bill Wednesday, during an Oct. 22 hearing. A 2015 study by Credit Suisse found that the presence of at least one woman on the board of directors can make a difference.

“Companies with one woman on the board have seen an average return on equity of 14.1% since 2005, compared to 11.2% for all-male boards,” Garodnick said. “The benefits are clear, which is why the bill is crucial to help us understand how diverse our corporate boards are right now and how the city can create policies to encourage that moving forward.”

Should Mayor Bill de Blasio sign the bill, which he is expected to do, the Department of Small Business Services will be required to create a voluntary survey and have it ready to distribute to proposed city contractors and subcontractors by January 15, 2017. The survey will be distributed along with existing employment reports, and will collect information regarding the selection and employment practices, policies, and procedures related to the racial, ethnic, and gender composition of city-contracted companies’ directors, officers, and other executive-level staff.

By July 1, 2018, the Mayor or a designated agency will need to publish a report on the website of the Department of Small Business Services (SBS) that analyzes the information collected and details companies’ plans for improving diversity in those positions, as well as their efforts to achieve those plans.

The bill is generally viewed as a win-win by Council members involved with the legislation, who say it will help all involved by facilitating diversity and equal opportunity while at the same time increasing the profitability and performance of companies.

While the administration is generally supportive of the bill, concerns have been raised about the onus fulfilling the mandate would put on SBS.

“The intention of this legislation is laudable and in line with the administration's efforts to fight inequality and promote the economic mobility of social inclusion of all New Yorkers,” Andrew Schwartz, then-acting commissioner of SBS said during the Oct. 22 hearing.

However, Schwartz continued, “The proposals would require significant additional work and analysis” and “many businesses may be reluctant to gather and provide this type of information. So the requirement may, in fact, deter some businesses from competing for contracts with the city.”

Additionally, Schwartz said, the new requirement could work against the city’s ongoing efforts to speed up the procurement process, and selecting vendors for contracts based on the diversity of their leadership “could raise issues that conflict with laws governing the city’s procurement process.”

Changes were made to the bill in response to those concerns. Responding to the survey was made voluntary for contractors, the deadline by which SBS must have the survey ready to distribute was extended, as was the date by which the administration has to publish a report analyzing the data collected. Notably, language was added to prohibit agencies from using information obtained by the survey as a basis for any procurement decisions.

“On it’s final version,” Garodnick told Gotham Gazette, “we have seen mostly support. We want to make sure that we encourage board room diversity among all businesses, and this bill will give us an understanding of where we stand.”