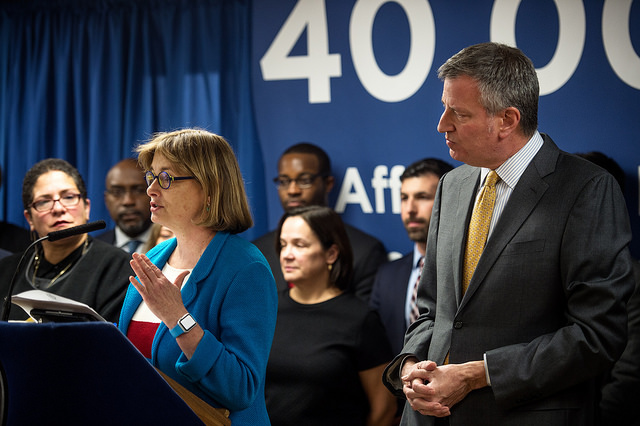 While sweeping new norms for city land use and housing development were passed into law last month, the debate over how to best achieve affordable housing continues. The larger affordable housing picture was the subject of a Wednesday event hosted by Stroock & Stroock & Lavan LLP, where Vicki Been, commissioner of the Department of Housing Preservation and Development (HPD), and Bronx Borough President Ruben Diaz Jr. were among the guest speakers who presented their views on city housing policy.

Diaz Jr. has been a vocal and frequent critic of the de Blasio administration, including its housing plans, which he again questioned at Wednesday’s event, entitled “Will NYC Ever See Affordable Housing?” Been, seated next to the borough president, explained and defended the policies that she has helped craft, even challenging the framing of the event.

“I want to just take exception to the way the question was phrased for this panel, which is: ‘Is affordable housing ever going to happen?’” Been said. “In fact, in the first two years of the administration we financed more than 40,000 affordable homes...which is a higher number of new construction starts than ever in the history of HPD and the second highest number total since Koch really started the program.”

Since the passage of Mandatory Inclusionary Housing (MIH) and Zoning for Quality and Affordability (ZQA), two significant changes to the city’s zoning code aimed at spurring more affordable housing development, much of the attention has turned to East New York, the first area that will be rezoned under the new MIH and ZQA rules. In essence, the city is allowing and promoting greater density - more development, taller buildings - while requiring certain percentages of new units to be kept under affordability guidelines.

Diaz Jr. has been critical of MIH and ZQA, both as a matter of policy and process. While continuing his critique Wednesday, he also acknowledged that the changes have already been made and that there is a new normal at play in terms of the way the city deals with zoning. Still, Diaz Jr. liked the old rules, whereby each land or neighborhood rezoning was subject to individual negotiations with fewer predetermined choices and rules.

“I also conceptually support the mayor’s goal of getting to 200,000 units of affordable housing,” Diaz Jr. said at the panel. “With that said, I did not support the zoning amendments. And you gotta understand that, over the last six years alone, in the Bronx we’ve done 17 rezonings and we have been able to do this by having a neighborhood-by-neighborhood approach.”

Echoing points he made during the panel discussion, Diaz Jr. later told Gotham Gazette, “I think we’ve shown that we can...create a lot of density, do it in an affordable way, do it [in a] neighborhood-by-neighborhood approach. And when I say ‘we,’ I mean from my office, to elected officials, to the community board, to many of the city leaders in whatever area. But I’ve said all along, with this MIH, what it does is it paints the entire city with one broad stroke.”

The panel event, hosted by former New York Attorney General and Stroock partner Robert Abrams and his public affairs group, included Diaz Jr. and Been, as well as a real estate developer and a new Stroock attorney recently departed from Attorney General Eric Schneiderman’s office. Been was warmly welcomed by her hosts, who she has worked with over decades.

To achieve affordable housing in every neighborhood in the city, and to ensure that, when growth is taking place, it promotes economic diversity, Been said, certain instruments like MIH had to be put in place. To go beyond the city’s affordable housing demand to meet the needs of particular groups like seniors, and the range of different types of housing that they need, ZQA was adopted to revamp the city’s out-of-date 1961 zoning ordinance.

Diaz Jr. has said before that the one-size-fits-all approach of city-wide land use rules reduces the flexibility with which communities and stakeholders rezone, and diminishes the capacity to take his favored neighborhood-by-neighborhood approach to rezoning. The ability to vary the affordability requirements at the most local level, he argued again at Wednesday’s event, has been proven to be effective when dealing with the complex realities of neighborhood housing and development needs.

Using his own borough as an example, Diaz Jr. said at the panel, “what I’m getting at is, in the Bronx it is complex. And with the new zoning changes...you’re handcuffing the communities and stakeholders from having that leverage and that ability to negotiate” with developers who have a part to play in the creation of affordable housing.

During the panel discussion, which also covered specifics beyond MIH and ZQA, Been did not respond directly to Diaz Jr.’s criticism, but when asked about it by Gotham Gazette after the event she said that MIH is essentially an “enabler” of rezoning. “It sets up an MIH program and requirements that then get applied in any of the 17 rezonings that [Diaz Jr.] was talking about...It doesn’t change any neighborhood on its own.”

While Diaz Jr. has said that he is concerned about allocating enough affordable housing for both low-income earners and middle-income professionals, citing a “brain drain” from his borough, Been pointed out that affordable housing requirements under MIH are averages for all the affordable units in a development, allowing for “enormous flexibility within those options.”

Despite the ongoing debate, Diaz Jr. recognized that the newly enshrined land use regulations are now a fixture of the city. “Well, we’ll see if it works,” the borough president told Gotham Gazette. “The bottom line is that they passed it into law, right? So, I can talk about my concerns all I want now, till I’m blue in the face. We’ll see if it works moving forward.”

The panel touched on how developers will be able to work with the city to create affordable housing, the prospects of achieving the affordable housing goals set by the mayor, and what can be done in the absence of the property tax exemption known as 421-a, which expired in January and is seen by many as essential to affordable housing development. In addition to Been and Diaz Jr., the panel included Ron Moelis, the CEO of L+M Development Partners Inc., which develops affordable, mixed-income, and market-rate housing; and Erica F. Buckley, who recently left Schneiderman’s office to join Stroock as an expert on real estate and government relations.

During the panel, Been took a moment to emphasize the importance of having a relationship with the Attorney General’s office - the de Blasio and Schneiderman administrations have teamed up on tenant protection efforts, among others. “You know you read a lot in the newspapers about tension between the City and the State” she said. “We have an incredible partner in the Attorney General’s offices...and it really depends upon amazing people like Erica and her former team...It’s so helpful to have that kind of working relationship and it really depends upon the leadership and the people on the team.”

On the impact that the missing 421-a tax abatement will have on new affordable housing developments, Moelis weighed in: “The city is doing a great job and has a lot of resources to create affordable housing…The mayor and the governor both have dedicated significant resources, more than ever, toward affordable housing and I think the capacity of the agencies is tremendous.”

“Hopefully [421-a] will be replaced with some other tax abatement for mixed-income housing,” Moelis continued, saying its absence “is important, but I don’t think it’s going to kill the production of affordable housing. I think it will continue at a pretty good pace.”

In the question and answer section following the panel discussion, Buckley noted that the Article II to XI Conversion Program could serve as a useful tool for preserving affordable housing options in the absence of 421-a, by allowing Mitchell-Lama developments to be converted to HDFC low-income cooperatives, rather than exiting an affordable housing program outright. When pressed on the issue, however, Buckley conceded that in her experience at the Attorney General’s office no projects had been initiated through Article II to XI Conversion.

Diaz Jr. brought the discussion back to 421-a: “Let me also state today that we absolutely need 421-a. Absolutely. And I’ve been speaking to anyone who will listen in the Legislature so that they can get this done.”

Whatever the city needs to achieve better affordable housing options, the land use regulations have been set. “I’m hoping that when it’s all said and done, I don’t have to tell folks, ‘I told you so,’” Diaz Jr. told Gotham Gazette after the event. “I mean right now, you know, again, I can speak about it till I’m blue in the face, but it’s the law of the City of New York.”