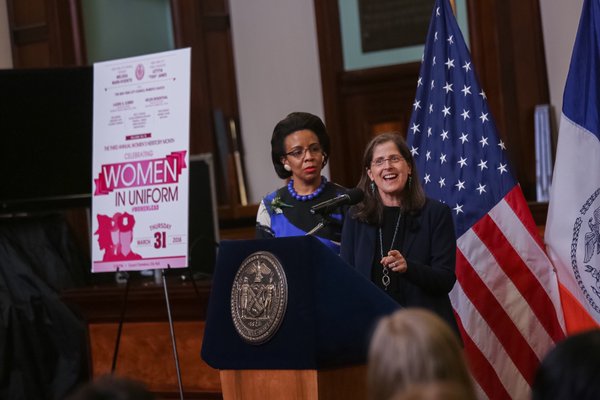 Access to reproductive health care is generally viewed as a “women’s issue,” a label that some say excludes men and more specific impacted groups from a variety of important conversations, and can make it more difficult for so-labeled issues to get the attention they deserve from public policy-makers. While closing the wage gap, securing paid family leave, combatting sexual assault and domestic violence, and protecting and improving access to reproductive health care impact everyone, not just women, the “women’s issue” label often marginalizes examination. Women, as 50 percent of the population, also have stake in every issue, from housing to economic development to transportation.

New York City Council Members Laurie Cumbo and Helen Rosenthal aim to use their roles as newly-elected co-chairs of the Council’s Women’s Caucus to “invite, include, and encourage men to be a part of the conversation,” as Cumbo said, and to make sure that women’s issues are not seen as separate, but rather, as the “economic issues” and “community issues” that they are, Rosenthal said, so that the responsibility of recognizing and responding to “women’s issues” falls on the entire City Council, not just the Council’s Committee on Women’s Issues.

“It’s critical that we recognize that families are being shortchanged when women aren’t bringing their whole dollar home,” Cumbo told Gotham Gazette, referring to the fact that women earn 79 cents for every dollar that a man earns in a parallel position. Cumbo said closing the wage gap - ensuring “equal pay for equal work” - and improving the public safety of women in New York City at a time when reported cases of sexual assault are on the rise are her top priorities, both as co-chair of the Women’s Caucus and as chair of the Committee on Women’s Issues.

The Council’s women’s issues committee has oversight of the Mayor's Office to Combat Domestic Violence, and holds hearings on issues deemed to be a public policy concern for women, like fairness in physical testing and the effectiveness of human tracking intervention courts. For Council budget hearings, the committee joins the Committee on General Welfare to examine social services agencies like the Administration for Children’s Services (ACS).

While some of the traditional focus of the women’s issues committee has been on typical “women’s issues,” there is evidence of movement beyond those domains, beginning with how Cumbo and Rosenthal are conceptualizing their work as caucus co-chairs.

April 12 was Equal Pay Day, a date that symbolizes how far into the new year the average American woman would have to continue to work in order to earn what the average American man earned in just the previous year. A report released by the office of Public Advocate Letitia James right before Equal Pay Day found that the wage gap for women working in New York City government is three times as large (18 percent) than for women working in the private for-profit sector (six percent).

“The wage gap doesn’t just hurt moms and their families, it hurts the economy,” Kristin Rowe-Finkbeiner, CEO and executive director of MomsRising.org, said in the press release that accompanied James’ report. “Women, and moms in particular, are the primary consumers in most families. When they can’t afford to buy basic necessities for their families, it also hurts our local and national economies.”

The report includes recommendations of equal pay for equal work (paying women and men the same when they are in parallel positions) and shows that women tend to be concentrated in certain city agencies, such as the Department of Education (77 percent women) and the Administration for Children’s Services (73 percent women), where the median annual full-time base salaries are $69,901 and $49,606, respectively.

Men overwhelmingly staff agencies like the Fire Department and the Department of Sanitation (91 percent men in both) where the median annual full-time base salaries are $76,488 and $69,339, respectively.

James’ report also recommends that workplaces advance family-friendly policies that support working parents, something New York State recently did when lawmakers passed a budget including a 12-week paid family leave policy. Governor Cuomo signed paid family leave into law on April 4 and the state will begin the multi-year ramp up to the full policy. New York joins four other states that mandate some form of paid parental leave.

The United States, Suriname, and Papua New Guinea are the only three, out of 185 countries with available data, that do not require the availability of paid parental leave.

“Women's issues are everyone's issues," said Council Member Ben Kallos, the only man on the City Council’s five-member Committee on Women's Issues, in a statement to Gotham Gazette. "We need a focused effort on issues like reproductive health and pay equity in order for everybody to rise together.”

Framing access to comprehensive reproductive health care as a “women’s issue” seems to ignore the link between a woman’s reproductive rights and her participation in the broader economy and society. As the Supreme Court majority wrote in a 1992 decision in Planned Parenthood v. Casey, “The ability of women to participate equally in the economic and social life of the Nation has been facilitated by their ability to control their reproductive lives.”

Research shows that “characterizing something as a women’s issue actually reduces the probability that it will succeed,” said Alexis Grenell, a Democratic political strategist and City and State columnist. “The data shows that gender balance is very important for a bill to succeed, for several reasons.”

According to one such study, published in the journal Politics & Gender, “scholars find that increasing gender diversity within a legislature may lead to increased attention to, and successful passage of, women’s issues bills.”

The authors of the study go on to warn that “within this current framework, women’s issues may become synonymous with “not-men’s issues,” implicitly exonerating male legislators from taking leadership roles in these policy domains.”

The lack of women in the New York City Council is a concern to Council Member Rosenthal, who says she intends to use her platform as co-chair of the Women’s Caucus to highlight the gender imbalance of the Council and encourage more women to run for office. Currently, 14 of the City Council’s 51 members are women, and five of the 14 are term-limited out in 2017, including Speaker Melissa Mark-Viverito.

“We want to replace those women with women, and hopefully pick up a few more,” Rosenthal said, while acknowledging what a challenge that would be, given that only eight total seats will be open due to term limits in 2017. The “long game,” Rosenthal said, is to “get us into a position, when there’s a lot more turnover in 2021 to get ourselves up to 21 [female] Council members.”

To Rosenthal, achieving this goal means raising the issue at every given opportunity. At a “Women’s Herstory” event organized by Council Member Cumbo to honor women in uniform during Women’s History Month, Rosenthal says she and Cumbo “took that opportunity with a room full of female leaders from a lot of different uniformed agencies to talk about women in leadership roles, and again raise awareness” of the Council’s gender imbalance. Rosenthal also brought up the issue during a press conference on the steps of City Hall on Equal Pay Day.

On April 7, members of the Council’s Women’s Caucus each hosted a young woman to serve as “Council Members for a Day,” an annual tradition at a full-body meeting of the Council.

Another program started by women in the City Council that aims to invest in girls and women is the Young Women’s Initiative, launched by Mark-Viverito last year. The YWI brings together stakeholders from community-based organizations, advocates, policy experts, and young women to identify gaps in services and create policy solutions to address gender and racial disparities.

Last year, Mayor de Blasio established a Commission on Gender Equity, which replaces the previous Commission on Women's Issues, and aims to improve the economic opportunity for all New Yorkers, particularly women and girls. The simple shift in language away from “women’s issues” to “gender equity” is significant in itself, implying a more inclusive commission that aims to achieve equity and involve more than just women. A bill has also been introduced in the City Council by Mark-Viverito that would establish a gender equity advisory board to study discrimination faced by New York City women and girls and the impact of that discrimination on their economic, civic, and social well-being.

Another priority for Rosenthal as co-chair of the Women’s Caucus is to “support women economically,” and “make sure that in all our areas of Council work, we’re identifying the disparity between men and women,” and ensuring that the Council addresses the needs of women, “both when it comes to funding items in the budget and in the legislation that we work on.”

Rosenthal’s role as co-chair has led her to increasingly view issues through the lens of how they affect women, she says. For example, Rosenthal is chair of the Committee on Contracts, and wondered aloud during an April 4 hearing on the challenges facing the human services sector whether gender is essential to the fact that the government pays the full costs of construction contracts, but does not cover the full cost of contracts with human services providers. The construction industry is male-dominated, while the human services sector is staffed mostly by women.

“We need families to be strong economically,” Rosenthal said, “and how can that happen when women” make less to begin with, and on top of that, “work in a sector where the contract itself is getting 80 cents on the dollar?”

Council Member Cumbo believes that classifying problems under the umbrella of “women’s issues” can be helpful, but only to a point. Calling something like preventing sexual assault or domestic violence a women’s issue may help rally stakeholders in support of the cause, yet, Cumbo says, “It is up to us to message it to say, ‘This is an issue that all people should be concerned about, and this is a discussion that men are very welcome to be a part of’ - it’s important that we work collaboratively to address these issues.”

Rosenthal also sees some merit in the “women’s issues” label. “I see it more as an opportunity - it’s simply another opportunity to talk about the role that women play in the working world and in their families, and another opportunity to make sure that their needs are addressed,” Rosenthal said, citing the fundamental biological differences between men and women when it comes to starting a family as something that needs to be addressed when creating policy. If men want to have a child, for example, they can do so with essentially no physical burden impacting their ability to go into the office, nor physical recovery time needed after a child is born.

Yet “from a policy standpoint,” Grenell says, “it’s not productive” to lump social problems under the women’s issues label, a construction that Grenell believes “creates a pink ghetto. This pink ghetto excludes men and gender nonconforming people and that reduces the efficacy of this construction.”

“Calling it a “women’s issue” makes it into a sort of niche matter, whereas abortion, paid family leave - these are not just women’s issues, these are people’s issues,” Grenell said.

The authors of the previously referenced study on the policy implications of female leadership on “women's issues” say their findings highlight the importance of reexamining the label - their results suggest that “legislators wishing to push for state investment in a woman’s issue may achieve the highest probability of success when they can gather a strong coalition of female sponsors and a near-equitable number of male legislators to join this sponsoring coalition.”