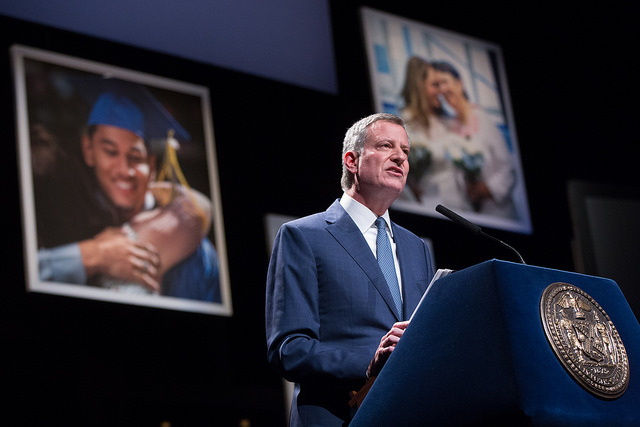 Mayor Bill de Blasio will release his Executive Budget for fiscal year 2017 on Tuesday and the nonpartisan, nonprofit Citizens Budget Commission has posed eight questions that people should be asking, including what to expect in terms of new revenue streams, new spending, the city’s fiscal reserves and agency savings, the impact of the state budget, and the city’s investment in capital projects.

The mayor’s budget presentation will come after he released his preliminary spending plan in January, a month of City Council hearings, the passage of the state budget, and the Council’s formal response outlining what it wants to see adjusted in the executive budget. Other than great consternation over major cuts to city funding that Gov. Andrew Cuomo had proposed but for the most part did not appear in the final state spending plan, it has been a fairly quiet budget season thus far. Still, there are a variety of issues to watch for as on Tuesday de Blasio takes the next step in the process that will yield a new city budget by the July 1 start of the fiscal year.

The mayor’s preliminary budget projected $82.1 billion in revenue (and expense, which includes dedicated savings) for fiscal 2017, up from $81.7 billion in 2016, owing to a steadily growing economy. This increase in revenue will help the mayor and the City Council pay for new initiatives.

Since the January release of a fairly cautious preliminary budget, the Mayor has announced additional spending and new policies that will be accounted for in the executive budget. This includes the merger of the Human Resources Administration and the Department of Homeless Services; a $21 million campaign to fight the mosquito-borne Zika Virus; an increase in emergency medical services necessitated by the bankruptcy of a private ambulance provider; new sustainability initiatives; and more.

On Monday, de Blasio announced a plan to change water and sewer bills paid by homeowners that will be factored into the executive budget, he said. This plan includes a $183 credit for 664,000 homeowners across the city, the mayor said at a press conference in Bay Ridge. The de Blasio administration also announced Monday that it would be offering $20 million to the city Board of Elections to reform its operations, pending an agreement to the mayor's terms, which have been the source of a great deal of criticism of late.

One thing still unknown is how much the mayor is dedicating in the first budget allocation for the new Department of Veterans Affairs.

The budget may also include some or all of $790 million in initiatives (new spending and tax reductions) outlined by the City Council in its response to the mayor’s preliminary budget. The Council estimated that the net increase to the budget per its requests would only be about $127 million once greater city agency savings and changes in debt service payments are factored in. Even with additional spending, the Council estimates a budget surplus of $258 million in fiscal 2017.

In the preliminary budget, the mayor continued last year’s practice of putting aside money for a rainy day. This includes $1 billion each year in the General Reserve, $3.4 billion in the Retiree Health Benefit Trust, and $500 million in the newly-created Capital Stabilization Reserve. The preliminary budget release stated, “The administration is also managing out-year gaps and continuing to find savings across City government. As of the Preliminary Budget, agency and debt savings will reduce expenses by over $1 billion in FY16-17, with more to come in the Executive Budget this spring.”

These agency savings are expected to come from the Citywide Savings Plan (CSP), a voluntary effort by agencies to identify ways of cutting costs while maintaining services. The preliminary budget estimated $1.85 billion in savings from fiscal 2016 through fiscal 2020. But CBC has criticized what it sees as low levels of savings by the de Blasio administration. “The CSP was small relative to the size of the budget and savings programs of past years and insufficient to meaningfully offset the cost of new initiatives or to boost reserves,” CBC’s new post reads. “Furthermore, it relied mostly on debt service savings from refinancings and included few efforts to improve efficiency.”

The City Council also began preliminary budget hearings with the stated goal of increasing savings and itself eventually identified at least $91.2 million in additional agency savings that were not included in the preliminary budget.

One of the areas where budget watchdogs, Council members and city Comptroller Scott Stringer have increasingly called on the mayor to cut costs is overtime spending, which reached a high of $1.4 billion in fiscal 2015. Most of the increase in OT costs has come from uniformed agencies, particularly NYPD. Last year, the Council approved an increase in the number of police officers contingent on the city reining in OT costs. Comptroller Scott Stringer, in his analysis of the preliminary budget, estimated that overtime spending will exceed city expectations by $136 million in FY 2016, $221 million in FY 2017, and $200 million in outyears.

An important part of the budget process this year was the effect of proposals in the governor’s executive budget, which he outlined in January. Two proposals in particular would have shifted hundreds of millions of costs for funding Medicaid and CUNY from the state to the city. These were ultimately dropped from the enacted state budget, leaving the city mostly in the clear. However, the final state budget re-directed $600 million in city sales tax revenue to the state -- $200 million annually -- while increasing funding for schools by about $525 million. About $160 million of this school aid increase was not included in the mayor’s preliminary budget.

Capital investment additions made since January will also have to be included in the executive budget. The preliminary budget proposed a $47.3 billion capital commitment plan for fiscal 2017 and the next three fiscal years (the capital spending plan is separate from the expense budget, which is what is typically referred to as the city budget). That has changed some since the mayor’s announcement that he would speed up the completion of City Water Tunnel No. 3, the release of the revised capital plan for the Metropolitan Transportation Authority (MTA) and the City Council’s changes to the mayor’s housing program.

“In addition, the New York City Housing Authority has extensive capital needs, and the Mayor may increase its capital allocation,” CBC’s Doulis and Alexander write. “Expanding the city’s capital plan will increase its outstanding debt.”

The Daily News is reporting that $70 million in capital funds will be included in the mayor's new spending plan to open a new police precinct in southeast Queens - something that City Council members in the area have been pushing for. Politco New York is reporting a combination of capital and expense spending related to the city's prisons, including funding for a new facility for the youngest detainees, classes for Rikers inmates, and more. De Blasio is also announcing funding for new, smaller snow plows to help ensure smoother snow removal during storms.

CBC also points to issues around funding NYC Health + Hospitals, the city’s beleaguered public hospital network. State Comptroller Tom DiNapoli estimated in October that the system is on the verge of going broke and will have only enough funding to last six days after the end of the fiscal year on June 30. Mayor de Blasio injected $337 million into the ailing system via the preliminary budget to keep it afloat, and announced a plan to overhaul its operations.

“That plan should accompany the Executive Budget and may require additional City support,” write Doulis and Alexander. Not long after their post was published, The New York Times reported that de Blasio is included an additional $700 million in this year's budget to support Health + Hospitals.

Stringer identified a number of risks and revenue offsets to the budget which he estimated would bring the city $599 million in additional resources for fiscal 2016 but would lead to gaps in coming years of about $200 million in FY 2017, growing to $2.72 billion in FY 2018, $3.83 billion in FY 2019, and $3.77 billion in FY 2020. “Given the uncertainty of the economy, large outyear budget gaps are now a greater cause for concern and reinforce the need for prudent fiscal management,” said Stringer’s report.

Following the release of the executive budget, the City Council will hold another round of hearings and then move to private negotiations with the administration. The final city budget is due before the start of the next fiscal year on July 1.