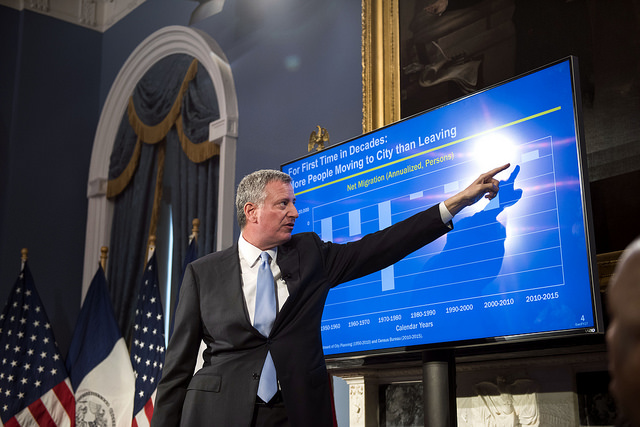 Mayor Bill de Blasio released his $82.2 billion Executive Budget for Fiscal Year 2017 on Tuesday, increasing spending by about $100 million from his proposed preliminary budget while expressing concern about a possible economic slowdown and the effects of consistent underinvestment by the state and federal governments.

The executive budget “continues a trajectory of progressive, responsible and honest budgeting,” the mayor said at the release at City Hall. “We believe that disciplined spending is the basis for everything we need to do,” he added. De Blasio outlined several hundred million dollars in new spending offset by similar amounts of new savings, while stressing “targeted investments” and focusing a good deal on a major infusion of funds to help rescue the troubled city public hospital system.

The mayor emphasized the city’s strong current economic situation with jobs at an all-time high of 4.3 million, of which 249,000 were added in just the last two years. But he cautioned that the growth of tax revenue, which was an average of 7 percent for the last five years, was slowing down. For fiscal 2016, the growth rate was projected at 3.6 percent and is expected to fall to 1.9 percent in fiscal 2017.

He also spoke of the decreasing support for the city from the state and federal government, repeatedly stressing the state’s failure to keep commitments. Since 2010, he said, the state alone had withheld about $2 billion in funding from the city under the Aid and Incentives for Municipalities program. When asked by Gotham Gazette during a question-and-answer session after his presentation whether he agreed with Gov. Andrew Cuomo’s assertion that the state could pull back on funding toward the city since the city is experiencing such good economic times, de Blasio said absolutely not.

Funding at the federal level is an even bigger uncertainty, the mayor said, considering there will be a new face in the White House come January. De Blasio’s biggest concerns were federal infrastructure investments and funds for counter-terrorism.

Despite these concerns and apprehensions about the effects of global financial instability on New York City’s economy, the executive budget added a number of new initiatives. All these, the mayor stressed, would be paid for through $1.25 billion in new savings through fiscal 2017, along with the $1 billion already identified in the preliminary budget, under the Citywide Savings Program. This is the city’s largest spending reduction program in five years, garnered through debt savings, spending re-estimates, and agency efficiencies. The mayor also said he would push city agencies to find hundreds of millions more in savings in time for the budget modification in November.

To insulate the city against negative pressures from international markets and the widely foreseen economic slowdown, the mayor added more funds to existing city reserves. While the preliminary budget had already laid out $1 billion for the General Reserve and $500 million for the Capital Stabilization Reserve, the mayor added another $250 million to the Retiree Health Benefits Trust fund, bringing it to a total of $3.7 billion.

Earlier on Tuesday, the administration highlighted a number of new spending initiatives included in the executive budget, coinciding with details that were released to different media outlets ahead of time.

There is added funding to triple the number of intensive care mental health units at the Rikers Island prison complex and enhance health services at city jails. About $8.7 would go to setting up eight new PACE (Program to Accelerate Clinical Effectiveness) units. That funding will increase to $24.2 million in fiscal 2020. An additional $2.7 million was added to expand pre-arraignment screenings in Manhattan, and $2.5 million to expand Hepatitis-C treatment in city jails. The budget also makes another $1.9 million in capital investments to improve patient care through telehealth and to add 12 new mini-clinics. Another $170 million will be invested to create an alternative housing facility for adolescents incarcerated at Rikers Island.

The executive budget also added a $160 million investment in Fiscal 2016 for the ailing municipal health system, New York City Health + Hospitals (H+H), which will increase to $180 million for fiscal 2017. In the preliminary budget, the mayor made a one-time investment of $337 million to keep the system afloat and the new funding stems from a comprehensive report, One New York: Health Care for Our Neighborhoods, which lays out a plan for overhauling the system. “We have to intervene aggressively here,” de Blasio said at the Tuesday release, citing a projected shortfall of $1.8 billion by fiscal 2020 if the city did not step in to reform H+H operations. The shortfall will be met through $700 million in expense reductions and $1.1 billion in new revenue.

About $66 million in additional money will pay for the city’s homeless services plan, of which $38 million would be offset by the recent merger of the Human Resources Administration and the Department of Homeless Services.

The city will also make more investments in public safety, starting with $70 million to create a new police precinct in Southeast Queens, satisfying a decades old demand, the mayor said. The budget also added $5 million for 50 new ambulance tours in fiscal 2017 (increasing to $10 million the following year) and $5.5 million to prevent and treat opioid addiction.

On Monday, at a press conference in Bay Ridge, the mayor announced a $183 credit for 664,000 homeowners across the city for paying water and sewer bills. This is included in the executive budget along with a $250 credit for eligible multi-family properties. Together, these will cost $122 million.

Another announcement made on Monday was “incentive funding” for the Board of Elections. The mayor set aside $1.5 million in the executive budget to study systemic issues with the BOE and said another $18.5 million would be included in the adopted budget if the board agrees to make significant reforms.

The executive budget also increased school spending with $161 million for raising the Fair Student Funding level for all schools to an average of 91 percent (at least 87 percent at each school) in fiscal 2017. This is expected to grow to $310 million in the next fiscal year with state support. The budget also includes $17 million for the Mayor’s Equity & Excellence plan, to improve college access, and $9 million to ensure elementary schools comply with state physical education mandates.

There was a massive bump in capital spending in the executive budget. A total of $685 million will be dedicated in the current budget and the upcoming Ten Year Capital Strategy to accelerate completion of the shafts for the Brooklyn/Queens section of Water Tunnel No. 3., speeding up the timeline for activation of the tunnel and building a new connection to Staten Island.

Nearly $280 million will go towards reconstruction of crucial city bridges: the Ed Koch Queensboro Bridge, the Brooklyn Bridge, and the Manhattan Bridge. Four new ferries will be purchased and the ferry pier at Brooklyn Navy Yard will be reconstructed for a total of $42 million in capital funds.

The budget also puts $21 million in capital funds towards new snow removal equipment for neighborhoods with narrow streets. The need was highlighted in the wake of Snowstorm Jonas this winter and identified in an After Action Report by the Department of Sanitation. The city will also spend $10 million in capital funds for two new animal shelters in the Bronx and Queens and $50 million for an indoor pool on Staten Island. An additional $186 million will go to repaving 1,300 lane miles of roads in fiscal 2018.

The executive budget also increases investment in climate resiliency, including $170 million for stormwater management infrastructure. It adds funds for after-school and community programs and an increase in seasonal employees at the Parks Department.

Maria Doulis, vice-president of the Citizens Budget Commission, a nonpartisan, nonprofit budget watchdog, sounded two big notes of caution in the executive budget. “There’s an incredible amount of new spending here,” she said, stressing that the savings that would offset this spending were not coming from productivity. “It relies on debt service savings, re-estimates and on Medicaid revenues, and not on agency efficiency initiatives.”

Although she acknowledged the mayor’s ongoing efforts to find agency efficiencies through the November budget modification, Doulis pointed out that these did not constitute a bulk of savings.

The other “big item” for Doulis is the city’s support for NYC Health + Hospitals. “That plan has many risks,” Doulis said. “It’s relying on H+H to achieve expense reductions that it’s not been able to do previously, on MetroPlus reimbursements and on federal waivers for Medicaid money, which are highly uncertain.”

Doulis also expressed concern with the massive capital plan, which totals $67.1 billion through fiscal 2020. “That’s bigger than some ten year plans I’ve seen,” she said. “The debt service is already very high. There needs to be some scrutiny over the capital plan.”

In a statement on Tuesday, City Council Speaker Melissa Mark-Viverito and Council Member Julissa Ferreras-Copeland, chair of the finance committee, also expressed reservations over the administration’s proposal to close the operating gap for Health + Hospitals, which they said was “contingent on substantial State and Federal cooperation which has not yet been assured.”

They also faulted the executive budget for failing to adequately invest in the city’s youth and immigrants. “As the Council begins our Executive Budget hearings on May 6th, we will continue to strongly push for critical investments that will greatly expand employment opportunities for our young people by increasing the number of year round and summer youth jobs, advocating for vital legal services and workforce development skills to support our growing immigrant population and fighting to combat food insecurity in our City,” they said.

Along with those hearings, de Blasio's team and the Council will negotiate over the next two months to achieve a budget deal before the July 1 start of the fiscal year. At this point, changes are likely to be minimal.

City Comptroller Scott Stringer, in a statement, commended the mayor’s executive budget for “enhancing our ability to weather unforeseen future challenges,” through new agency savings and boosted city reserves. He praised the increased funding for security at homeless shelters, reforms at the Board of Elections and expanded access to physical education in public schools.

On Health and Hospitals, however, he reserved judgement. “As an analysis released by my office last year made clear, setting New York City Health + Hospitals on a more sustainable financial path forward is a critical priority for our City,” he stated. “However, more information is needed to fully assess the proposed plan to ensure that all New Yorkers can access quality healthcare.”