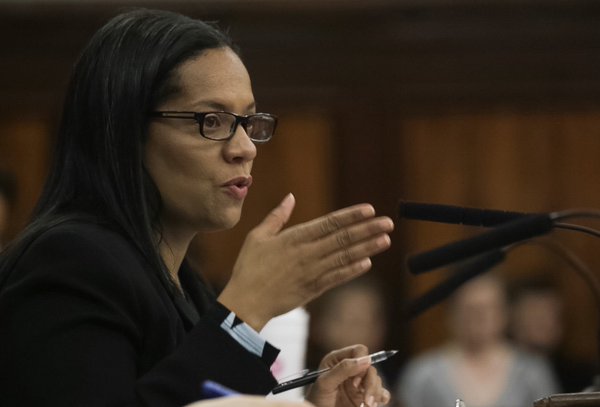 Following Mayor Bill de Blasio’s April 27 release of his $82.2 billion Executive Budget for fiscal year 2017, the City Council on Friday held the first of many hearings to look at the latest iteration of the city’s spending plan for the year beginning July 1. As the Council examines the executive budget through a series of agency-focused hearings, negotiations around key priorities and final adjustments will be taking place behind the scenes.

The executive budget increased overall spending by only about $100 million compared to the preliminary budget, but added a number of new initiatives paid for by $1.25 billion in additional savings, including an ambitious plan to overhaul the floundering municipal hospital system, New York City Health + Hospitals.

Leading Friday’s initial hearing, City Council Member Julissa Ferreras-Copeland, chair of the finance committee, commended the mayor for funding a number of proposals outlined in the Council’s response to the preliminary budget. These included additional funding for 50 ambulance tours, increased staffing at the parks department, boosting the pay rate for contractual employees at the Department for the Aging, and additional education funding, among others.

“However, after reviewing the Executive Budget, it is clear that it is the Mayor’s budget,” said Ferreras-Copeland in her opening statement, “rather than a budget that reflects the collaborative budget process envisioned by the Charter to ensure that the shared priorities of both the Administration and the Council are included.”

Ferreras-Copeland stressed that despite nearly $2 billion in new spending since the 2016 adopted budget, a 6.2 percent increase, many of the Council’s top priorities had not been funded, including youth jobs programs, expanded after-school programs for elementary school children, restoring 34,000 slots to the summer programs for city youth, baselining case management services for seniors, and providing additional funding for cultural institutions.

In its preliminary budget response released April 4, the Council had identified about $790 million in proposals of which the executive budget only funded $61.9 million worth.

Ferreras-Copeland also highlighted continuing concerns over a lack of clarity in the Citywide Savings Program, pointing out that most savings were from spending re-estimates and delays in spending rather than programmatic savings in agencies. She recommended that savings be categorized under these fields and explained in detail to provide more transparency. The mayor said during his executive budget presentation that he expects additional agency savings to be identified by the time of the November update to this next budget deal, per instructions to his commissioners.

Ferreras-Copeland also noted Friday that although the mayor had added to the city’s existing reserves, bringing them to a total of about $7 billion, this number is essentially flat compared to last year and expenses have risen in the same time.

Facing Council questioning was Dean Fuleihan, director of the Mayor’s Office of Management and Budget, who defended the “strategic investments” and “disciplined fiscal management” of the administration, pointing out that the $2.3 billion citywide savings program is the largest in five years with more to come in the November update. He also stressed the city’s substantial rainy day funds. Budget watchdogs and rating agencies do agree that this administration has been fiscally responsible in its spending but many have called on the city to boost these reserves to insulate against a widely forecasted economic downturn. 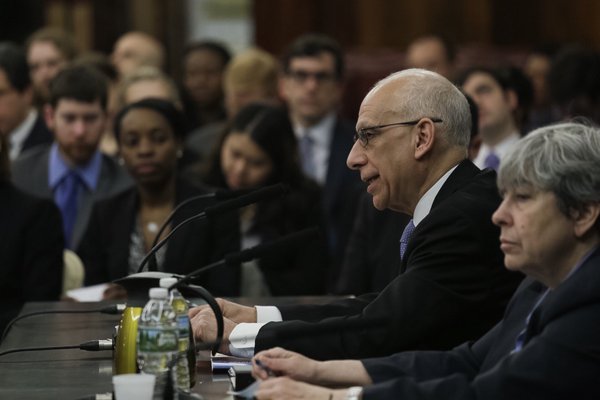 Fuleihan (pictured) reiterated this concern as well, and also spoke of the dangers of shaky global markets and the lack of support from the state and federal governments, as de Blasio had when he presented the executive budget earlier this month. Outlining the city’s new spending initiatives, including investments in public safety, education, anti-homelessness services, transportation, infrastructure and the Board of Elections, Fuleihan said the executive budget, “makes investments that address longstanding structural issues that affect all New Yorkers.”

Throughout the hearing, Fuleihan repeatedly emphasized the administration’s willingness to collaborate with the Council on its proposals. He said multiple times, “We’re happy to continue that conversation,” whether it was to Council Member Steven Matteo on his request to discuss property tax rebates or to Council Member Ben Kallos, who brought up issues of performance budgeting and contract overruns.

As evidenced by de Blasio’s latest budget outline and Friday’s hearing, one of the most important issues at play right now is the city’s plan for reforming and revitalizing NYC Health + Hospitals, which was laid out in a new report, One New York: Health Care for Our Neighborhoods.

The executive budget has $180 million in fiscal 2017 for the hospital system, with the ultimate aim of avoiding a $1.8 billion shortfall by fiscal 2020.

At Friday’s hearing, the Council was skeptical of the administration’s plan, with Ferreras-Copeland questioning whether it addressed long-term budgetary concerns from federal cuts under the Affordable Care Act and the system’s decline in revenue generation. These issues were also raised later by Council Member Corey Johnson, chair of the health committee.

“There’s I think...a lot of assumptions in the $1.8 billion plan, $700 million in expense savings, $1.1 billion in new revenue generation,” said Johnson, questioning Fuleihan on the risks of the plan.

“Of course there’s risks,” Fuleihan said, acknowledging that the city would have to work with federal and state authorities for reimbursements for health care costs and possible Medicaid waivers.

Multiple Council members also addressed what they see as underinvestment in city youth, particularly the Summer Youth Employment Program and afterschool programs under School's Out New York City (SONYC), key issues the Council had highlighted in its preliminary budget response. “This is a major and serious issue for us that 34,000 young people will not have an opportunity to have a summer program, a summer camp experience that they experienced last year and we have heard no viable solution,” said Council Member Laurie Cumbo.

Although questioning moved on before Fuleihan could answer, it was brought up again by Council Member Vanessa Gibson. This time, Fuleihan said, “We understand these are important programs, what we did in the executive budget was address priorities that the mayor established and we were able to address many of the Council priorities.” He said the city has doubled the number of middle school children in afterschool programs under SONYC, which was “the focus of the program. That’s where we put our attention.”

Council Member Helen Rosenthal asked about the city’s bond ratings, which Fuleihan said have been strong and stable. Rosenthal also called for fully funding nonprofit human services contractors. The issue was the subject of an oversight hearing chaired by Rosenthal in April.

Fuleihan again said the administration would take these issues into consideration. “That's the point of the adopted budget,” he said. “I understand.”

The Council’s executive budget hearings will continue for the next few weeks, looking at individual city agencies, with the last hearing scheduled for May 24 where the public will be invited to comment. Following that, the Council, led by Ferreras-Copeland and Speaker Melissa Mark-Viverito, will negotiate behind closed doors with the administration before coming to an agreement by the June 30 deadline.