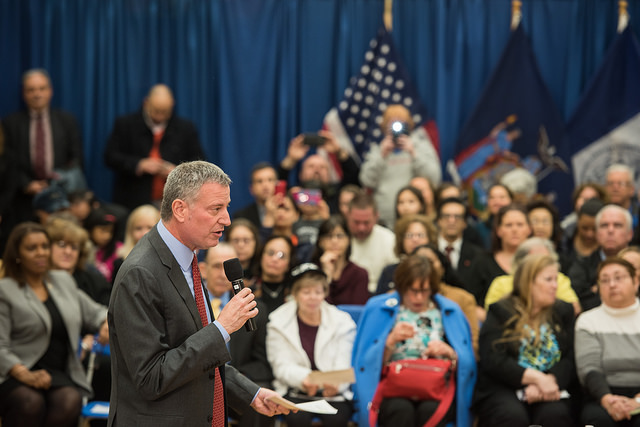 Over the last few weeks, facing the spectre of multiple investigations, Mayor Bill de Blasio has repeatedly stressed that he, his administration, and his allies operate ethically. “We hold ourselves to the highest standards of integrity,” the mayor has said repeatedly as reporters have questioned him about allegations of impropriety in his fundraising operations.

In support, the mayor has regularly referred to the city’s internal mechanisms for ensuring such behavior.

As the mayor has cited the training the Conflict of Interest Board delivers to city employees and the guidance he and his team sought from it while engaging in their fundraising, as well as the work of the Department of Investigations, the city’s annual budget process has been unfolding.

The season has shifted from the preliminary to the executive budget iterations, with a final deal between de Blasio and the City Council due by the July 1 start of the next fiscal year. As the mayor has touted both COIB and DOI, he has had an opportunity to put money where his mouth is, so to speak, while his administration has also had the chance to weigh in on pending tweaks to the city’s campaign finance system that include reducing the impact of donation bundlers who have business before the city. There are currently limits on how much entities with business before the city can donate to candidates. (A federal investigation is reportedly focused on whether donors to a nonprofit aligned with the mayor received favorable city action. Nonprofits face no donation limits.)

During a preliminary budget hearing in March, COIB representatives told City Council members that the agency was significantly underfunded and thus unable to retain good staff or complete its mandated trainings.

DOI on the other hand, had no complaints as its budget was already ballooning, with Commissioner Mark Peters simply left to explain how he is using the additional millions.

When the mayor released his executive budget on April 27, both COIB and DOI saw bumps in funding, though for COIB funding is still not where board officials or City Council members want to see it.

The Department of Investigation’s $47.4 million allocation in the executive budget is about $3.2 million more than the preliminary budget of $44.2 million. Over last year’s adopted budget of $30.9 million, that’s a 53.3 percent increase. During his preliminary budget hearing, DOI Commissioner Peters justified the agency’s budget increase, telling the City Council’s Committee on Investigations, chaired by Council Member Vincent Gentile, that the agency has become more proactive and has started to focus on overarching systemic issues that can lead to corruption and ineffectiveness.

“As the City's workforce continues to expand,” said mayoral spokesperson Karen Hinton, “the funding provided in both financial plans will directly support the additional staff required for [DOI] to fulfill its Charter-mandated mission to eliminate fraud, corruption and mismanagement of public fund and policies.”

Mike Bistreich, legislation and budget director for Gentile, said the additional funding would also help alleviate some of the lag in background checks that DOI is supposed to perform.

However, DOI’s budget did not include significant savings, which was a cause for concern for Gentile at the preliminary budget hearing. In response, Peters proposed that 261 investigators at other agencies be moved to DOI’s payroll so their overtime could be paid through federal asset forfeiture funds.

“As investigative staff from other agencies come onboard with DOI through the positions approved in the last financial plans, DOI will be able to cover their overtime with this funding stream,” said Hinton. “In effect, saving City Tax Levy that was previously dedicated to the overtime burden. This has not been fully implemented.” Hinton said that DOI will save at least $1.6 million over the next two years, though, by implementing this for current lease payments and employee overtime.

Peters, it should be noted, has recused himself from one investigation DOI is undertaking into the de Blasio administration, over a suspect lifting of deed restrictions on a former health care facility that will become luxury housing. Peters was de Blasio’s 2013 campaign finance chair. His potential conflict of interest in leading the agency charged with investigating the mayor’s office and other city agencies was the subject of his 2014 City Council confirmation hearing when de Blasio nominated him for the job. He was voted through by a wide margin.

At the Conflicts of Interest Board, which is largely focused on preventing corruption through education and guidance, the funding picture is a bit more grim. Although it receives a $2.32 million allocation in the new executive budget, about $90,000 more than last year’s adopted budget, it is not enough for an agency where the workload in recent years has skyrocketed and staffing has remained relatively flat.

COIB representatives complained at their preliminary budget hearing that the agency struggles to retain staff because of low salaries. Three proposals they made in 2015 for increased funding were rejected by the Office of Management and Budget, they said.

Raising salaries across the board would’ve required less than $200,000, according to COIB officials who testified at the preliminary budget hearing. Instead, the executive budget outlines fiscal 2017 salary increases totaling $22,000, along with an additional $4,000 for training equipment, according to Hinton. Part of the total increase since last year’s adopted budget was due to collective bargaining agreements that have been settled. Hinton pointed out that during Mayor de Blasio’s tenure, COIB has received about $292,000 in additional funding over various budgets.

“I wish it was more,” said Alan Maisel, chair of the Council’s Standards and Ethics Committee, which has oversight of COIB. “With more money, they could always do more -- more trainings in ethics rules, they could send teams out to site locations.”

Since 2010, COIB has been mandated with training city employees in ethics rules every two years. The city has nearly 320,000 employees and COIB has only four full-time staffers, out of a total of 22, who conduct these trainings.

Maisel agreed with the mayor’s assertion that the COIB is a strong accountability agency but insisted that it could do a better job with more staffing and resources. When Gotham Gazette asked if he’d push for more funding in the executive budget negotiations, Maisel said, “I’ve already done my pushing. I don’t know where it’s going to go...Hopefully we can get them to add more money. We’re not asking for a fortune here.”

Executive budget hearings began on Friday with the Committee on Finance, an opportunity for Council members to air any budget concerns with de Blasio’s budget director. The hearing included no mention of the Conflict of Interest Board. There is no specific executive budget hearing for the Committee on Standards and Ethics scheduled. This often happens when Council members decide there is little to discuss around agency allocations.

There is also no executive budget hearing scheduled for the Committee on Oversight and Investigations.