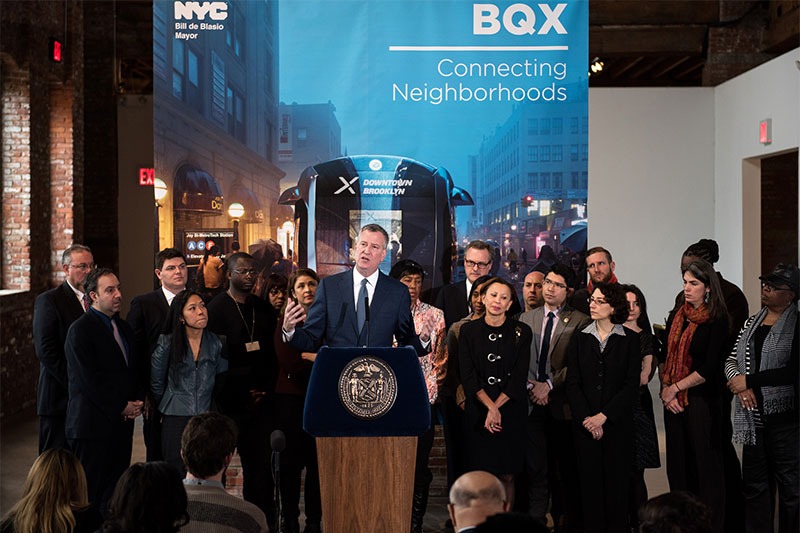 In his State of the City address on February 4, Mayor Bill de Blasio announced a major new transportation project: a “state-of-the-art” streetcar that will run the waterfront on a 16-mile route between Sunset Park in Brooklyn and Astoria in Queens. This Brooklyn-Queens Connector, or the BQX, has drawn a somewhat mixed response. The de Blasio administration quickly publicized support from a variety of business and civic leaders, elected officials, and several transportation advocates. Some transportation experts and residents of the neighborhoods where the BQX will run remain skeptical.

De Blasio hailed it as another key step in fighting inequality by offering more mass transportation to underserved New Yorkers, especially those in the public housing complexes near the route. It would also be a project the city would control itself, unlike the MTA, a state agency that runs the trains and buses. One immediate question, of course, was ‘who’s going to pay for it?’

On February 16, the administration offered up more details in a media release that included the line “Self-financed streetcar line would generate 28,000 jobs and over $25 billion in wages and economic activity for New Yorkers.” A key phrase being “self-financed.”

The project is estimated to cost about $2.5 billion, which the city will raise through a method of value capture and creation unlike the usual procedure of financing capital projects. Instead of selling municipal bonds to borrow money and paying those off from city revenues, as is done for capital funds, the city will create a non-profit entity -- likely a Local Development Corporation (LDC) -- which will then issue tax-exempt bonds to raise funds. This debt will be paid by “capturing” the increases in property taxes of existing real estate and new developments along the streetcar corridor. In effect, the plan is that BQX will pay for itself with the revenue it creates.

Although LDCs are non-profit entities that are usually set up by private individuals and businesses interested in developing their communities, the city can also set up LDCs like the Hudson Yards Infrastructure Corporation (HYIC) and give them bond-issuing authority to raise funds.

Private LDCs often receive support from the New York City Economic Development Corporation (EDC), a city-run nonprofit organization that promotes businesses and economic growth. For instance, the Greenpoint Manufacturing and Design Center LDC has received more than $4.4 million since 2014 from the City Council and the Brooklyn Borough President through EDC to convert an auto parts warehouse into a multi-tenant manufacturing center.

The city is nowhere near setting up the nonprofit -- officials are currently courting public opinion and further assessing the BQX proposal -- but a similar structure was used under Mayor Michael Bloomberg for the redevelopment of Hudson Yards on Manhattan’s West Side. HYIC was set up in 2005 to raise funds by issuing $3 billion in bonds for projects including the extension of the 7-train subway line and building green spaces from West 30th to 42nd Street between 10th and 11th Avenues. This is an analogous example of how the BQX will be funded and built.

“As imagined, there would be no new taxes,” said an official from EDC. “This project will make it so that value of properties will go up so property taxes will go up nominally. Property taxes sliced off the top would be funnelled towards debt service.” In other words, increased property tax revenue is used to pay back the bonds.

The EDC official added that there will be revenue through property taxes on new development along the corridor.

Two key mechanisms of value capture are tax increment financing (TIF), which seems to be planned for BQX, and payments in lieu of taxes (PILOT). TIF is formulaic while PILOT is discounted payments negotiated with developers instead of regular property taxes. The administration has not clarified yet whether they will use both tools.

In the case of Hudson Yards, HYIC garners revenue chiefly through PILOT, Tax Equivalency Payments (TEP), which are property taxes collected by the city from new development in the area, and District Improvement Bonuses paid by private developers for the right to build additional density, among other sources.

City officials have not yet provided a detailed funding plan or fully explained why they are choosing value capture, which may have advantages in that it doesn’t add to existing capital debt, but also risks leading to higher costs that take longer to pay off. This was apparent in the years after the Hudson Yards project began. By 2014, the city had paid about $439 million to service HYIC debt owing to shortfalls in projected revenue. That’s added onto the millions in cost overruns that the city also had to bear. The city had signed an Interest Support Agreement to service HYIC debt in the case of revenue shortfall.

“There can be risks,” said George Sweeting, deputy director of the Independent Budget Office, a nonpartisan publicly-funded budget watchdog. Sweeting pointed out the disconnect between when the investment is made and when the city can start capturing value and making payments, since development doesn’t happen overnight. That’s why, in the case of Hudson Yards, the city agreed to pay off part of the debt directly from its general fund in the form of interest support payments and HYIC raised additional revenue by selling developers the right to create additional density.

“It depends on how fast you think development will occur,” Sweeting said. “Some of where the [streetcar] is going has significant development already,” he added, noting that land along the waterfront has already become more valuable in recent years. “You might not be able to attribute [further growth] to the BQX.”

With the traditional model of capital funding, Sweeting said, the city can “cross-subsidize” using other resources to pay off debt. That’s not necessarily the case with a dedicated value-capture scheme. “It can take longer to pay back,” he said.

Bridget Fisher, associate director of the Schwartz Center for Economic Policy Analysis at The New School, highlighted many of the risks in value capture funding in a report from July. Looking at the Hudson Yards redevelopment project, she sought to dispel the “myths” of self-financing.

“Like Hudson Yards, describing these projects as self-financing is a rhetorical tool that can be misleading,” Fisher told Gotham Gazette. “There’s nothing magical about value capture. It’s still debt and it’s still expensive. It’s a decision to go outside the municipal bond market that adds cost, but the city’s still on the hook for the cost.”

These bonds, issued by a nonprofit rather than the city directly, are also in a “legal limbo,” she said, since they’re not backed by the city but by an entity created by it. Adding to that, bond buyers receive higher interest rates because the bonds are not directly backed by the city, but still have the security of knowing the city will pay them back. “It does pay for itself,” Fisher said, “but all capital projects pay for themselves. They’re paid for with debt and debt is paid back with profits.”

“The question to me is, why choose a route that’s more expensive when you have the capacity to do it through the normal city capital budget, which also has democratic checks and balances?” Fisher added.

There is an advantage to the mechanism, depending on your budgeting perspective. The city has a constitutionally mandated debt limit and value capture funding does not add to it. “It preserves the general obligation debt capacity for other important projects,” Sweeting said.

According to a report by New York City Comptroller Scott Stringer, the city’s debt limit in fiscal 2016 was $85.18 billion. As of July 1, 2015 (start of the 2016 fiscal year), the city’s outstanding debt counted towards the debt limit was $57.43 billion, leaving $27.76 billion in debt-incurring power for the city. For fiscal 2017, the city’s debt is about $72 billion, owing to capital plan additions in this year’s budget.

“The only pro,” said Fisher, “is that in an environment hypersensitive to spending, local officials can provide growth opportunities and still maintain a rhetoric of fiscal discipline.”

“There is no absolute right or wrong,” said IBO’s Sweeting. “There are a lot of considerations to take into account -- how much new development there will be, the time between when you make investments and development will occur, and how you structure the value capture.”

For the City Council members whose districts will be served by the BQX, funding is just one of the many concerns about the project. Council Member Carlos Menchaca represents Sunset Park, at one end of the line, and Council Member Costa Constantinides represents the other end, Astoria.

“As we get more thoroughly through the process, there’s a lot of questions that have to be answered in my mind both on financing and the actual route and how it’s going to affect the communities,” Constantinides told Gotham Gazette shortly before an unrelated hearing at City Hall.

He intends to be a strong voice throughout the process, he said, and wants to be part of the LDC when it is set up. So far, he believes the city is taking the right approach to community outreach and seeking input on the project - EDC held its first BQX visioning session in Astoria on Monday night. “That is a welcome change from when we used to have a mayoralty that would dictate to us how things were going and we’d have to respond,” Constantinides said.

The Council member sees the potential in value capture funding, but also the risks. “I just wouldn’t want to see residents that are further away from the site…One, two, three-family homeowners that live two blocks from where this would potentially be...to see them get crushed by some sort of increase in their taxes would just not be where I was at,” he said. For homeowners, additional property value can be a great thing, but if you do not intend to sell in the near term, making larger property tax payments based on new assessments can be challenging.

Menchaca reiterated these concerns. “I want to make sure that residents of affected neighborhoods like Sunset Park and Red Hook have a leading voice at the beginning of the process and in a way that determines the exact details and impact of the project,” he said in a statement. He emphasized that the BQX could provide relief to “transit deserts” like Red Hook and create better mass-transit for the growing manufacturing zone in Sunset Park. But he recognizes that it could also contribute to gentrification and displace existing residential and commercial tenants.

“We've all seen ‘it will pay of itself’ projects fail to live up to expectations or have unintended consequences,” he added. “The impact of BQX – including the financial impact – must be studied carefully in public with residents at the center of the conversation.”