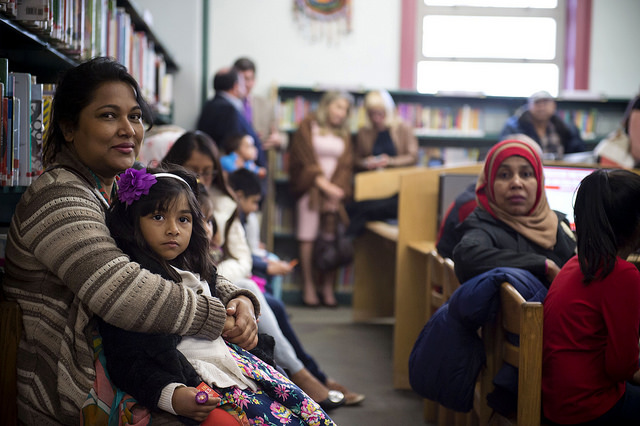 Three years after Bill de Blasio promised universal pre-kindergarten in his mayoral campaign, New York City alone has more enrolled preschoolers than any other state except for Georgia. The city’s free Pre-K For All program received interest from 6,500 families on its first day of accepting applications in 2014. Now more than 68,000 children are enrolled in the rapidly expanding initiative.

Ninety-two percent of parents surveyed by a city-contracted research firm rate the Pre-K For All program as good or excellent, citing educational and behavioral benefits for their children. Years of research has found high-quality preschool programs to be especially beneficial to children of low-income families, children with disabilities, and children of color, since all often face learning gaps when entering kindergarten. Though there is concern about pre-K gains being lost by third grade, the de Blasio administration is attempting to run a program and larger education system that sets and keeps students on a stronger trajectory.

While the main focus of pre-K has been and will be student learning and development, a universal pre-kindergarten program also has significant potential benefits for working parents and the economy. It is a secondary positive that Mayor de Blasio and his team don’t often cite, but have referenced on several occasions over the years.

“Every child, regardless of their family’s means or the zip code they call home, will have access to a life-changing early education,” de Blasio said at a press conference on the first day of this school year, in September. “Because of Pre-K for All, tens of thousands of children will do better in school, be more likely to graduate high school, and be better prepared for college and beyond.”

UPK was de Blasio’s number one campaign pledge and a key cog in his promise to create more equity in New York City. The more immediate economic benefits for parents and the economy also stand to help shrink the socioeconomic and opportunity gaps that the mayor has targeted.

The pre-K program is “saving parents money and helping them work,” de Blasio stated in a press release urging families to apply to pre-K early this year, but only after saying that “This is one of the best choices any family will ever make for a child.” At several press conferences, though, de Blasio has mentioned this secondary benefit of the UPK program, stressing parents’ ability to save on child care expenses, find a job, or pick up more work hours.

In 2012, Pew Research Center found that New York was the most expensive state for four-year-old and school-age child care. “The average family saves $10,000 per year in childcare costs through the free Pre-K for All program,” the de Blasio administration says. For low-income families, the elimination of this financial burden is especially significant.

Middle-income families also benefit from UPK because they don’t qualify for federally funded programs like Head Start, and are still unable to afford tuition for private preschools or child care. Some have questioned if the city should be subsidizing upper-middle- or upper-class families’ pre-school costs by making the additional grade universal.

“If a family needs to cover child care for the day from 9 a.m. to 6 p.m., even if pre-K is only from 9 a.m. to 3 p.m. and they have to pay for after care, it still defrays the cost,” said Katie Hamm, Senior Director of Early Childhood Policy at the Center for American Progress.

The Center for American Progress found that before the city’s UPK program existed, more than one-third of New York families waitlisted for child care assistance lost their jobs or were unable to work. A similar study in Los Angeles reported that a lack of affordable and reliable child care forces working parents to face lost hours and wages and low employment rates, which is estimated to cost L.A. County almost $600 million in economic activity every year.

The report also states that working mothers are disproportionately affected when there are no viable child care options. As Los Angeles preschools face steep funding cuts, the report estimates that the loss of affordable preschool seats will cause 6,000 working mothers to give up about 1.5 million work hours, costing them an annual total of $24.9 million in lost wages, or $4,150 per working mother.

With consistent child care, mothers are twice as likely to keep their jobs, according to research by the Institute for Women’s Policy Research. Another study suggests that government-funded preschool programs could increase the employment rate of mothers by 10 percent.

“Enabling more women to work by improving access to child care can help mitigate the gender wage gap and reduce a mother’s likelihood of going on public assistance,” wrote Center for American Progress researchers in a report on preschool and working mothers.

A working mother and Bushwick resident, Rocio Espada, says she was able to keep her job because of New York City’s pre-K program. Espada is a member of advocacy group Make the Road New York and a single mother of four children. She worked at a restaurant to support her family while her youngest daughter was enrolled in public preschool.

“Without public pre-K, I would’ve had to stay home with her or found a way to pay a babysitter,” Espada said in a phone interview. “Public pre-K is the best thing the city government has done so far. It’s a big relief.”

Espada found that public preschool was the best option for her daughter because she was not only taken care of while Espada had to work, but she was also beginning her education and learning how to interact with other children. Using babysitters or private child care does not have the same educational benefits for children. At the same time, many are eagerly waiting to more formally measure how much academic and social impact pre-K is having on the children who participate.

While the city has indeed enrolled almost 70,000 four-year-olds in pre-K, as of this past fall more than 6,000 are still in full-time child care instead, according to the Independent Budget Office. This care is provided through vouchers given to families with young children receiving cash assistance and participating in work training programs or qualifying low-income working families. The vouchers can be used for the child care option of the family’s choice, which lack the educational foundation that comes with preschool.

After criticism that the initial expansion of UPK focused on wealthier families, the city has focused outreach on low-income families, like those eligible for vouchers. Last year, children from low-income families accounted for more than half of the program’s enrollment. In a phone interview, Department of Education Deputy Chancellor Josh Wallack said the program will continue expanding until it can offer a seat to every child in New York City and give all families access to educational child care.

While the pre-K program continues to grow, the city has contracted Metis Consulting Group, Westat research firm, and researchers from New York University to track how the program is benefiting children and parents. Part of their research will include the economic well-being of families and their ability to participate in the workforce. With the second school year of the expanded pre-K program almost complete and enrollment for the third year continuing, more data is becoming available.

Many will be watching not only for metrics from those hired to track UPK, but for students’ third grade test scores - state standardized tests in English Language Arts and math begin in third grade - especially the comparison between UPK participants and nonparticipants from the same year or prior years.

The city and DOE view quality early childhood education as an investment in the public school system as well as an important aspect of developing the economy, Wallack said.

“Pre-K itself is an investment that the city is making in our children that will go on to help build the city going forward,” Wallack said. “It’s an investment that we’re making in the economy of New York City, both because of the immediate effects of helping families participate in the workforce, but also in helping a whole generation of students do even better in school and then go on to participate in the economy of New York City in the next generation.”