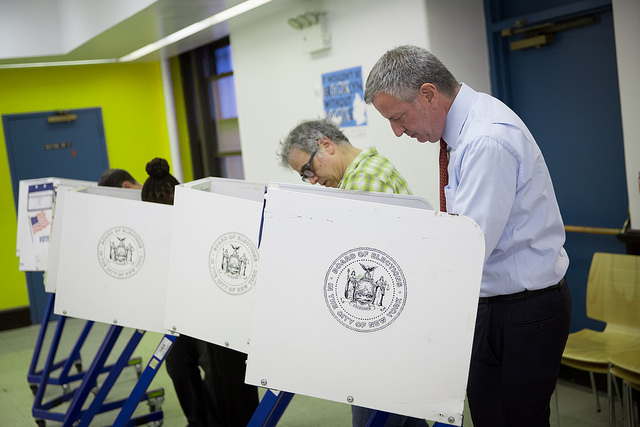 When the presidential primaries hit New York last month, they landed with a frenzy and, in New York City, something of a thud. Not only did the Democratic and Republican contests include candidate competition around the city and state, but the city Board of Elections added an entirely other bit of far less welcome drama.

Over 100,000 missing Brooklyn Democratic voters from the rolls and widespread complaints of mismanagement - nothing new for the long-maligned BOE - caused an uproar as New Yorkers saw their first competitive presidential primaries in decades. So far, two employees of the board have been suspended, pending investigation, over their role in the error-filled voter purge.

As problems became clear, Comptroller Scott Stringer announced an audit and then Mayor Bill de Blasio announced millions of dollars in added funds if the BOE agreed to a reform plan. The BOE will administer three more election days this calendar year, with Congressional primaries coming up June 28.

While reliant on city funding, the city BOE is actually governed by state law. De Blasio has little he can do to change its governance structure, which he and many others call outdated and in need of drastic change. But, de Blasio is trying to improve BOE operations by offering a carrot.

When de Blasio released his executive budget plan on April 26 - a week after the New York presidential primary vote - it included a significant increase in Board of Elections funding, both guaranteed and conditional. In his preliminary budget, the BOE was allocated $88.4 million, which increased to $123.7 million in the executive budget. Although this may seem like a steep increase, it was largely expected since the administration has employed the same tactic three years running of lowballing the BOE in the preliminary and funding it more fully down the line.

City Council Member Ben Kallos, chair of the governmental operations committee that has oversight of the BOE, criticized this practice at the relevant preliminary budget hearing and vowed to hold the city budget office’s feet to the fire if it happened again.

What makes the BOE’s funding even more muddled is that de Blasio announced an additional plan, allotted the BOE $1.5 million in the executive budget to study systemic problems and said another $18.5 million would be available in the adopted budget if the BOE agrees to a plan of reform by June 1.

It is not yet clear how the BOE will respond to de Blasio’s offer.

At an April 27 meeting, a day after the mayor put forth his proposal, BOE Executive Director Michael Ryan said, “Given all of what’s swirling around this particular election event, our singular focus is making sure that the votes are counted and that the certification is accurate. Once we complete that process, I’m sure we’re going to have time to pick our heads up and focus in other areas and we will get to that at the appropriate time. We’re just not in a position to speak either intelligently or publicly on any proposals that are made by anyone right now because we have to, like a laser, focus on getting this election certified and certified properly.”

A spokesperson for the BOE declined comment on Thursday. On Friday, the BOE will be before Kallos’ committee for the agency’s executive budget hearing.

While next year’s BOE budget could be almost identical to this year’s, a bump in funding is actually clear, said de Blasio spokesperson Karen Hinton, pointing to the fact that there are only two election days in fiscal 2017 - the September state-level primaries and November general elections - compared with the four in fiscal 2016. Therefore, the associated total costs of running elections - poll worker pay, transportation, supplies and voting machine servicing - are projected to be lower. BOE would have more money to spend on better services.

That doesn’t explain why BOE’s Ryan had estimated in the preliminary budget hearing that the board would need at least $138.5 million in fiscal 2017. And that was before the mayor promised additional funding for reforms.

On Friday, the governmental operations committee will explore these issues at the executive budget hearing where Ryan will testify. Council Member Kallos, a longtime proponent of BOE reform, intends to take the BOE to task over its handling of the April primary, the details of which are still emerging. Just this week, it was revealed that the BOE had rejected 90,000 out of 121,000 affidavit ballots cast in the election. There may not be anything wrong with those rejections, many New Yorkers went to the polls thinking they were registered but may not have been. The results were certified on May 6.

“I’m concerned that the Board of Elections is underfunded and setting up the democratic process for failure,” Kallos told Gotham Gazette. At Friday’s hearing, he will press the BOE for more details on “whether they have enough money to run an election, whether they have enough to hire poll workers, to advertise, and to do an audit of why 90,000 affidavit ballots were rejected in the primary.”

One of the major changes Kallos is pushing for is the elimination of patronage positions. The BOE has a bipartisan structure and its commissioners and employees are selected based on their affiliation with the two major political parties on a borough by borough basis. Kallos takes issue with this and said BOE funding should come with “terms and conditions” such as the hiring of professional employees through an open hiring process to replace patronage positions, and required audits of “who’s doing what and where.”

Referring to the mayor’s offer of extra funding, Kallos said, “I think the BOE needs to do everything they can to improve their image and to assist voters. They need to accept all the help that’s offered.” He also rejected the administration’s rationale that the BOE budget is lower this year because of fewer elections. “The general election is the superbowl of elections,” he said, referring to November.

At a City Council press conference on May 5, Council Speaker Melissa Mark-Viverito did not give much detail in answering a question from Gotham Gazette on the BOE budget and the mayor’s proposal. “We’re going through budget negotiations,” she said. “Whatever proposals of additional money is something that we have to discuss and has to be adopted by us, so we will engage in those conversations. It’s preliminary to discuss any details on that.”