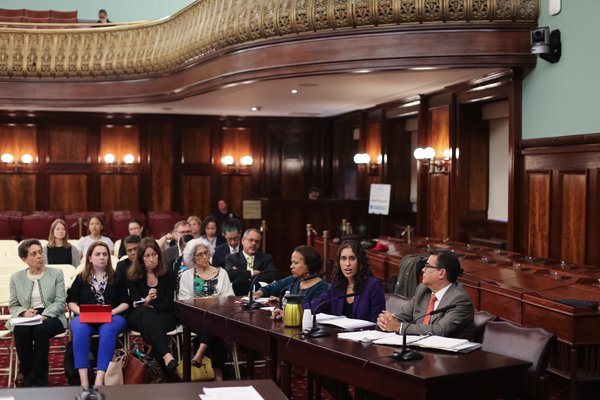 With four agencies testifying over the course of several hours, a Friday executive budget hearing held by the City Council’s governmental operations committee, along with the finance committee, had a lot of ground to cover on important issues like election administration and law department function. Two of the agencies testifying have even been sources of controversy in recent months and the hearing was an opportunity for Council members to air their concerns and get some answers. At many points during the hearing, however, agency officials had little to offer and major questions were left unanswered.

The hearing included testimony from the city Board of Elections, the Campaign Finance Board, the Law Department, and the Department of Citywide Administrative Services, in that order. Leading the hearing from the Council side were City Council Members Julissa Ferreras-Copeland, chair of the finance committee, and Ben Kallos, chair of the governmental operations committee.

Perhaps most crucial were BOE and DCAS, two agencies which have dominated headlines in recent months -- the BOE for its shoddy handling of the April 19 presidential primary election and massive, inappropriate voter purges in Brooklyn; DCAS for lifting a land-use restriction that allowed a nursing home owner to sell property to a luxury real estate developer. Both those incidents are being investigated and the City Council will soon hold dedicated oversight hearings. Friday’s budget hearing still provided Council members, and others, the opportunity to ask important questions, even if answers were not always provided.

Board of Elections
Following the April primary, the BOE has been the target of much criticism. Mayor Bill de Blasio vowed to use his budgetary power to bring about change and followed through with an offer of $20 million in additional funding on the condition that the BOE agrees to a structured plan of reform by June 1. Of this, $1.5 million was included in the mayor’s executive budget with $18.5 to follow if BOE signs the deal. A budget deal between the Mayor and the Council is due before the start of the new fiscal year on July 1.

At Friday’s hearing, BOE Executive Director Michael Ryan couldn’t say where BOE commissioners stood on the proposal since they had yet to analyze it in detail. “Once the details of the proposals have been fleshed out, they will be shared with the commissioners and, ultimately in a quasi-legislative process, the commissioners will have to pass on that either in totality or in part,” he said.

Ryan also couldn’t say whether the BOE would consider replacing patronage positions with professional employees selected through an open-hiring process, a top priority for Council Member Kallos and several of his colleagues (it is also something de Blasio has called for). This authority, Ryan insisted, lies with the BOE commissioners, who are borough-based. The structure of the BOE is also dictated by state law, which de Blasio and others say they want to see changed.

Kallos was less than satisfied with Ryan’s testimony overall. “I got the answers I have learned to expect, but not the answers that I wanted or needed,” he told Gotham Gazette during a break in the hearing.

Law Department
The Council’s three major issues with the Law Department budget are the projected cost savings in the judgement and claims budget; the financial implications of a recently settled lawsuit against the city; and the department’s contracting with two outside law firms to represent the city in two investigations into Mayor de Blasio.

Law Department officials couldn’t explain how their judgements and claims budget included $430 million in reductions over the next five years. In the preliminary budget, it was projected to increase from $746 million in Fiscal 2017 to $855 million by Fiscal 2020. They also couldn’t say if a recent $140 million judgement against the city in a case concluded in February 2016 was included in this year’s budget.

When Council Member Ferreras-Copeland asked about the calculations that went into these figures, managing attorney Muriel Goode-Trufant said, “We do not know.” She said these decisions were made by the Office of Management and Budget after considering input from the Law Department. “You do not know? That’s awesome,” Ferreras-Copeland responded sarcastically, promising to follow up with OMB director Dean Fuleihan.

Kallos was also interested in knowing how much it would cost the city to contract with the two law firms to defend the mayor and the city. Again, agency officials were scant on details, insisting that the process was ongoing and they had yet to assess the final costs.

“The taxpayers could be on the hook for millions?” Kallos asked.

Department of Citywide Administrative Services
DCAS is a little-known city agency that manages the city workforce, property and buildings, and fleet of vehicles. Last year, the agency lifted a deed restriction on Rivington House, a nursing home in Manhattan’s Lower East Side, which allowed its new owner to make millions in a sale to a real estate developer. Essentially, the property was flipped and in the process, what had been a nursing home was to become luxury housing. As expected, many questions from Council members to DCAS Commissioner Lisette Camilo revolved around the way DCAS handles deed restrictions.

Camillo would not address the Rivington deal directly, since it is under investigation (several entities at various levels of government are investigating the deal). “In order to protect the integrity of the investigation, I’m not going to be able to answer questions specific to that,” Camillo said. But she did explain how deed restriction payments are evaluated and where DCAS revenue is reflected in the budget.

Naturally, a similar deed restriction sale in Harlem, reported by the New York Times on Friday morning before the hearing, raised more questions about how many deed restrictions the city is considering and how many it had lifted in the last few years. Camillo told Council members that current requests for changes in deed restriction had been put on hold, about 14 in all, and the process was being reviewed.

The Campaign Finance Board testimony was quick and included the least drama, though there are reforms to the city’s system being considered - the bills were the focus of a recent Council hearing - read about those here.