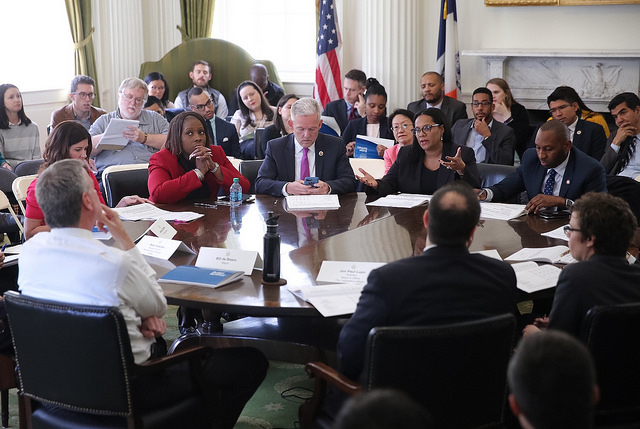 The Mayor and Council discuss the budget (all photos: William Alatriste)

City budget season entered its home stretch last week when the City Council conducted its final hearing on Mayor Bill de Blasio’s $82.2 billion executive budget for fiscal year 2017. With a deal between the Council and the mayor due by the July 1 start of the new fiscal year, the parties will largely negotiate behind closed doors, with funding levels for a number of major priorities on the table. There are also lingering questions about savings and how much the de Blasio administration is asking its agencies to trim as spending grows.

On the Council side, negotiations will be led by Speaker Melissa Mark-Viverito and Council Member Julissa Ferreras-Copeland, chair of the finance committee. This past Tuesday, Ferreras-Copeland reiterated concerns she had expressed at the first executive budget hearing that de Blasio’s latest spending plan, his executive budget, largely ignored the Council’s priorities while adding massive appropriations for the administration’s proposals.

“I can say today, after presiding over nearly 65 hours of Executive Budget hearings, that the testimony we heard from the agencies only reinforced this notion,” she said in her opening statement at the final executive budget hearing. “Over the past two weeks, we questioned each commissioner about the items from the Council’s budget response that were not included and were repeatedly told that they were just not a priority.”

Ferreras-Copeland called out agencies for assuming that the Council would fill budget gaps with its discretionary funding - particularly for the Department for the Aging and the Department of Youth and Community Development - and also pointed out that they had given few details about how $2 billion in new funding would be implemented. Throughout the budget process, she said, “the Council’s ability to fulfill its Charter-mandated review and oversight role was hindered by the administration’s delay in providing vital information, despite public assurances that documents and data would be provided promptly.”

Specifically citing the administration’s ambitious plan to overhaul the municipal hospitals system, New York City Health + Hospitals, as problematic, Ferreras-Copeland (pictured) said that the plan was provided to the Council less than a day before the first executive budget hearing. 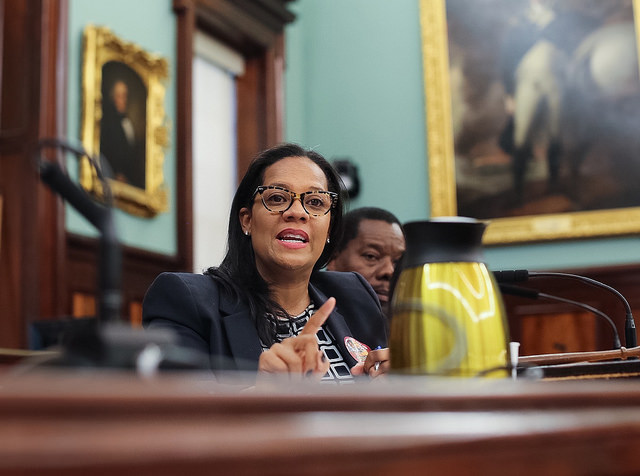 The issue of savings, which has underscored the entire budget process, was raised again last week. The mayor’s executive budget shows $5.4 billion in savings through the Citywide Savings Program through Fiscal 2020. For 2017, however, Ferreras-Copeland stressed that the city’s reserves are largely flat, and Council Member Helen Rosenthal pointed out later that the CSP depends heavily on debt refinancing, spending re-estimates and accruals (delays in spending from earlier years) rather than programmatic efficiencies.

An analysis by Citizens Budget Commission, the nonpartisan nonprofit budget watchdog, showed that $189 million of the nearly $1 billion in savings proposed just for fiscal 2017 comes from agency efficiencies. “The increased size of the CSP is a step in the right direction,” says the report, “but too little of the savings are from agencies thinking strategically and creatively about how to provide value to taxpayers and do more with less.”

Since coming into office, de Blasio has on one hand been praised for what he is socking away and the general health of the city economy and his fiscal prudence, but on the other hand he’s been criticized for not demanding more in savings from his commissioners and not having the recommended budget “cushion” in savings. Under de Blasio, savings have grown, but as the city economy has boomed, union contracts have been settled, and the mayor has implemented many new programs, spending has grown rapidly and the cushion does not meet the percentage of city spending that watchdogs like city Comptroller Scott Stringer say is wise.

At a press conference on Wednesday, Speaker Mark-Viverito said Council members would start discussions on the negotiations by Thursday. “We’re starting to have the formal process internally to delineate the priorities and engage with the administration,” she said in response to a question from Gotham Gazette. She pointed out that many of the Council’s top priorities had already been identified over the course of budget hearings.

Council members have publicly called on the mayor to increase funding for a variety of initiatives and programs including summer jobs for youth, emergency food assistance, cultural institutions, human services nonprofits, seniors, and the offices of the five district attorneys.

Summer Youth Employment
Council members and community advocates have been pushing for increased baseline funding for the Summer Youth Employment Program (SYEP), which provides six weeks of paid work to youth 14 to 24 years old. Last year, the program served 54,000 young people and supporters want to increase that to 60,000 this year, reaching their eventual goal of 100,000 by the 2019 fiscal year. Currently, the city is allocating $36.5 million for SYEP which, along with $15.6 million from the state, would fund about 35,000 jobs. 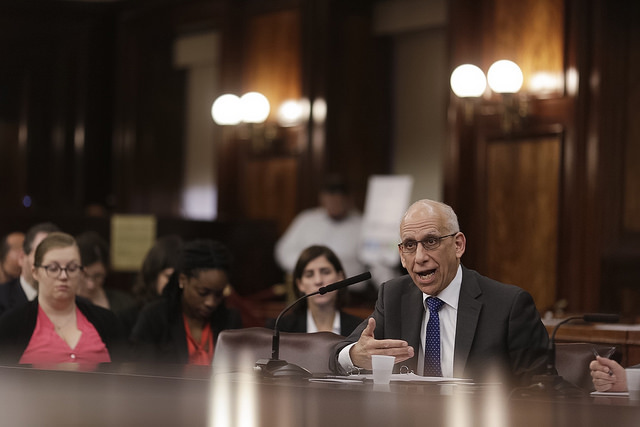 At last week’s final executive budget hearing, Dean Fuleihan, director of the Office of Management and Budget, stressed that the administration has made huge commitments to DYCD, increasing the agency budget by nearly $250 million over the years, but the SYEP was not a priority. “I understand that the Council wants this to be a priority and that’s going to be a part of our conversation,” Fuleihan (pictured) said.

Emergency Food Assistance
The executive budget includes $8.2 million for the Emergency Food Assistance Program (EFAP), but 48 Council members signed a letter calling on the mayor to increase this to $22 million and baseline it in the budget. “Millions of New Yorkers rely on meals from food banks and soup kitchens, and the need is greater than ever before,” said Council Member Stephen Levin, chair of the general welfare committee, in a statement last week. “No family should have to choose between paying for necessary expenses and being able to eat,” he added.

Fuleihan pointed out that this increased need was due to significant cuts in federal funding for emergency food programs and that the administration was open to discussing the funding with the Council.

Cultural Programs
A number of Council members are pushing to increase the budget for the Department of Cultural Affairs. Council Member Jimmy Van Bramer, chair of the cultural affairs committee, pointed out at last week’s hearing that the City Council’s cultural initiatives have increased over the last two years but the administration is not sharing that commitment. He and many of his colleagues want the city to increase funding for nonprofit cultural institutions by $40 million - it has remained flat for the last three budgets - and to baseline $43 million for six-day service at city libraries. Currently the city has baselined about half of that library funding. Again, Fuleihan promised to work with the Council on the issue.

Department for the Aging
Council Member Margaret Chin said that the previous administration “was all about cuts” to funding for seniors and the Council expects this administration to be “quicker and faster” in funding services for a growing senior population.

In his testimony, Fuleihan emphasized that the administration has committed to senior services and increased Department for the Aging’s budget by $30 million since Mayor de Blasio took office, reversing a trend of at least ten years of reductions in DFTA’s budget. He insisted to Chin that the administration has increased DFTA case manager salaries and that it would eliminate waiting lists for homecare, one of Chin’s priorities.

District Attorney Offices
The executive budget did not include any additional funding that the five District Attorney offices had requested after the preliminary budget was released. The Council, which listed public safety as one of its top priorities in its budget response, called on the mayor to heed these requests, which total about $21 million. Citing the Council’s own commitment to criminal justice reform, including the funding of 1,300 new officers for the NYPD last year, Council Member Vanessa Gibson, chair of the public safety committee, said, “What I fail to understand is, in the executive, is why we have a big whopping zero for the district attorneys.”

Fuleihan said the dialogue with the district attorneys was ongoing, particularly the two new DAs in the Bronx and Staten Island. “We do believe that’s part of the adopted budget,” he said at last Tuesday’s hearing.

Human Services Nonprofits
On Thursday morning, Council members rallied with nonprofit groups at City Hall to push the mayor for $25 million to cover administrative costs at contracted nonprofits that provide social services. These nonprofits, according to a report by the Human Services Council, are facing a budget crisis owing to government underfunding. In a letter, 47 Council members asked the mayor “to offer some critical budget relief” to nonprofits and help them invest in equipment, technology, and staff development.

In a statement on Thursday, mayoral spokesperson Karen Hinton said, “We look forward to working with the Council throughout the budget process.”