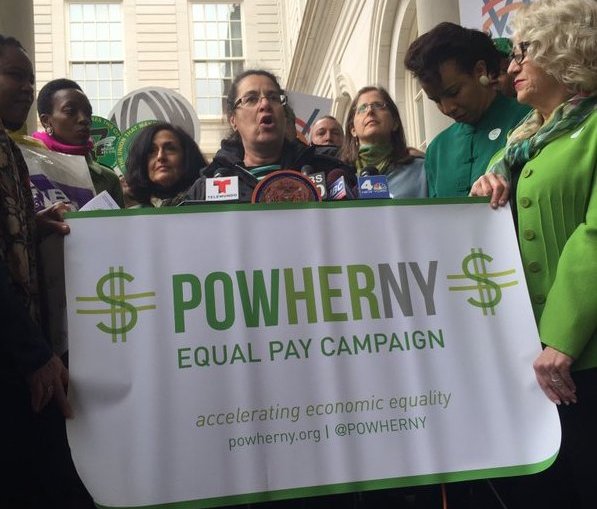 During a recent panel conversation at The New School, only two people in a crowd of about 50 raised their hands when the audience was asked if they were confident there is no gender pay gap in their workplace. The panel, called “Getting Even,” was organized by the Center for New York City Affairs to discuss the causes of the pay gap between men and women and the steps New York City can take to close it.

While many women receive lesser salaries in the same jobs as men, leading to calls for “equal pay for equal work,” the wage gap is also caused by devaluing so-called “women’s work,” the trend that keeps women in traditionally lower-paying jobs. Pay inequity has been a persistent problem in New York City, where women make up almost half of the workforce. Across sectors and jobs, a woman who works full-time in the city earns 87 cents to every dollar a man makes, according to a recently-released study by Public Advocate Letitia James, published in April. This means on average, a man in New York City makes almost $7,000 more than a woman every year.

Public Advocate James began looking into the gender wage gap after Local 1180 CWA, a labor union representing mostly public sector workers and some employees from private companies or nonprofit organizations, brought a lawsuit against the city under the administration of former Mayor Michael Bloomberg, claiming that administrative managers were being underpaid. At the time of the lawsuit, more than 78 percent of administrative managers in the city were women. But as women became that significant majority in these management positions, the minimum salary fell. Even women who worked for the city for 20 to 30 years made about $7,000 less each year than men with the same experience, according to a CWA statement on the case. The lawsuit was settled by the Bloomberg administration, but James continued her research and found more information on the municipal gender pay gap.

One of the driving factors in the municipal pay gap is the jobs that women typically hold in the public sector. In New York City’s municipal workforce, about 93 percent of employees are unionized, so both men and women are often locked into certain pay scales through collective bargaining.

According to the public advocate’s study, the Department of Education and the Administration for Child Services have the highest percentages of female employees. These agencies have average salaries of $69,901 and $49,606, respectively. Women also make up 70 percent of employees in the Human Resources Administration, which has an average salary of $41,401. Men represent the largest percentage of employees in uniformed workforces, like the Fire Department and the Department of Sanitation, which offer average salaries of $76,488 and $69,339, respectively. The data suggests that women are concentrated in city jobs that traditionally have lower incomes than the jobs that men dominate. Policies like work hours, promotion practices, and civil servant exams also contribute to the wage gap, which the study says should be monitored more closely as part of the effort to close the gap.

“In order to correct this, we need to correct it first at home,” James told Gotham Gazette in a phone interview, referring to the gender pay gap generally and among city employees more specifically. “We have the ability, given our oversight and our legislative authority, to correct that which we have control over. We should start in-house first.”

The public advocate’s study includes a list of recommended actions to close the municipal wage gap. An Equitable Pay and Opportunity Task Force - made up of city officials, researchers, and political scientists - will be created by the Public Advocate’s office to provide research-based recommendations to Mayor Bill de Blasio and the City Council. This task force will be separate from the mayor’s Commission on Gender Equity and will examine different data and industries, but James has reached out to the mayor’s office with plans to collaborate and is waiting for a response, she said.

Two essential steps to closing the public sector gap, according to James, are disclosing wage information about the public pay scale and preventing inquiries regarding salary history during hiring processes.

“When you talk about previous wage salary, you establish a floor,” said James. “And as a result of that floor, which is discriminatory in nature, you start off with a discriminatory base. So we really want to prohibit city agencies from asking about previous salary information of job applicants.”

City Council Member Ben Kallos, the only man who serves on the Council’s Committee on Women’s Issues, also believes wage disclosure will be an important tool in working towards pay equity.

“You can look up every public employee’s salary and we know what their gender is,” Kallos told Gotham Gazette in a phone interview. “Why can’t we do an automatic and internal audit comparing folks to their collective bargaining and make sure people are getting paid what they’re supposed to? The entire point of the civil service is supposed to be equity and treating people based on what they know, not who they know or what their gender is.”

While the public advocate’s study notes that wage disclosure and the prevention of job application questions regarding previous salary can be encouraged in the private sector, it cannot be mandated that private industries follow these practices. However, wage disclosure could be just as important for the public sector, according to “Getting Even” panelist Beverly Cooper Neufeld, the founder of advocacy group PowHer New York. At the New School event, Neufeld noted wage transparency is necessary for identifying wage gaps, holding employers accountable, and discouraging them from discrimination.

Other solutions offered by the panelists included strongly enforcing anti-discrimination laws, advocating for the right to collective bargaining and a higher minimum wage, support for government programs like universal preschool, laws for paid sick leave and paid family leave, and changing the culture of workplaces.

Some of these potential solutions have already been enacted, such as New York City’s Pre-K For All program, which helps mothers work at all or stay at work longer by providing free child care (though that is not the sole or even top purpose of pre-K, of course). The state also passed a paid family leave policy as part of the 2016-17 state budget and set a path toward a minimum wage of $15 per hour.

Commission on Gender Equity Director Azadeh Khalili, also on the wage gap panel at The New School, said New York City will look to best practices from other cities. She cited a mentor program in Boston as an example, which provides about 80,000 women training in negotiating for themselves.

On changing workplace culture, Neufeld discussed the perception of motherhood in the workplace as a significant factor in the pay gap. She referred to the unofficial “bonus” men receive when they become fathers: they are more valuable to the workforce because they are now working to provide for a family. Women, on the other hand, are devalued when they become mothers because it’s assumed they will spend less time at work and more time with their children. On average, women lose about 4 percent of their earnings every time they have a child, according to a 2014 study by Michelle J. Budig, a professor at the University of Massachusetts-Amherst.

However, the gender wage gap affects women regardless of parenthood, education level, or occupation.

Women also face inequity as consumers, according to a study on gender pricing published last year by the city’s Department of Consumer Affairs. The results showed women’s products cost about 7 percent more than men’s, costing women an additional $1,351 every year, on average. The price difference in products marketed to women - ones identical to men’s products aside from packaging or coloring - is most significant in personal care items, children’s toys, and clothing (for both girls and women), according to the DCA study.

“Our study showed that no matter whether you’re a baby or a senior citizen, you’re still being affected,” DCA Deputy Commissioner Alba Pico said in a phone interview. “You’re paying more than what a male would pay for your whole life.”

The gender wage gap and gender pricing are often considered “women’s issues.” But as more women enter the workforce and become the primary providers for their families, they become economic development issues.

“There are a lot of women in the city of New York who are heads of households,” said Public Advocate James. “And when you cheat them out of an equitable and fair wage, you obviously have an adverse effect on their children and on the local economy.”