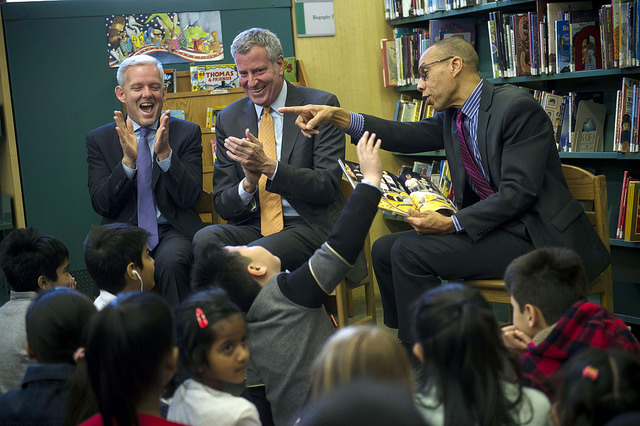 Members of the New York City Council have joined together with cultural institutions and advocates to petition Mayor Bill de Blasio to increase by $40 million the funding for cultural programming and organizations in the upcoming city budget. With a budget deal due by the July 1 start of the new fiscal year, final negotiations are underway between the City Council and the de Blasio administration, and outside groups are making their last gasp lobbying efforts.

The increase would be split between institutions built on city land, like the Queens Museum and the Brooklyn Botanic Garden, and independent groups, like Harlem Stage. The mayor proposed $144 million in funding for the city’s Department of Cultural Affairs in fiscal year 2017 through his executive budget. This number is down about $15 million from the $159 million in the adopted budget for the current fiscal year. (A spokesperson for the department told Gotham Gazette that a significant portion of the decrease is due to electricity savings realized by cultural organizations.)

The petition to increase funding for the Department of Cultural Affairs in the city budget is in part a response to city funding for cultural affairs having stagnated since peaking at $161 million in 2008. Despite economic growth and increased spending leading to a ballooning city budget in recent years, city funding for the Department of Cultural Affairs has actually decreased slightly overall and somewhat significantly as a percentage of the city budget, which will be in the neighborhood of $82 billion for the coming fiscal year.

A coalition of cultural organizations called One Percent for Culture, which was formed in 2010 to encourage the city to increase cultural affairs funding, is working with City Council members to draw the mayor’s attention to the needs of nonprofit cultural organizations reliant on funding from the Department of Cultural Affairs. The coalition is a nonprofit made up of over 1,300 members, including both independent groups and institutions built on city land. The Brooklyn Museum, BRIC, Alvin Ailey Dance Foundation, and Harlem Stage are all members, for example.

“We are frustrated that culture and the arts have not seen any increase despite the fact that the money is there,” City Council Majority Leader Jimmy Van Bramer said in an interview with Gotham Gazette. Van Bramer chairs the Council’s cultural affairs committee and has worked closely with One Percent for Culture since 2013.

Van Bramer is leading the current Council petition for a $40 million increase in cultural affairs funding, which has the support of Republican Minority Leader Steven Matteo and 44 other members of the 51-seat Council, all of whom signed a letter submitted to the mayor on May 18, just ahead of the Council’s May 19 executive budget hearing on cultural affairs and libraries.

“We asked the Commissioner of Cultural Affairs some very tough questions about where funding for culture is in Mayor de Blasio’s list of priorities,” Van Bramer said in an interview following the hearing on May 19. “[Mayor] de Blasio has been blessed with a very robust economy and a robust budget with billion dollar surpluses, but he has not increased support for cultural institutions.”

De Blasio did approve a $23 million increase in arts education funding in 2014, $1.4 million of which has gone to cultural institutions through their partnership programs with schools. But this is far from the increase in funding currently sought by the City Council, arts organizations and advocates that would go straight to cultural institutions through the Department of Cultural Affairs.

The commissioner of the department, currently Tom Finkelpearl, advises the mayor on the needs of cultural programs and controls the distribution of the department’s funds. Two department funds exist, one of which goes to support the operating costs of the Cultural Institution Group (CIG) members. This group is made up of the cultural institutions built on city land, which include the Queens Museum, the Brooklyn Botanic Garden, and the Public Theater, among others. CIG members are receiving $103.8 million altogether through the Department of Cultural Affairs in the current fiscal year, according to a spokesperson from the department.

The rest of the cultural affairs budget goes into the Cultural Development Fund, from which the department distributes grants to independent cultural groups in the city. These groups are receiving $33.9 million in grants from the Department of Cultural Affairs this fiscal year, according to the department spokesperson.

The City Council is asking that the $40 million increase in the cultural affairs budget be split between the two funds, if it is granted. Spokespeople from CIG organizations and independent groups say they need more funding to keep pace with rising operational costs and public interest. Increasing rents in the city have hit independent organizations hard since 2008, while growing membership numbers have raised the operating costs of city-affiliated institutions, they say, without adequately providing more revenue.

“We have already worked to lower expenses,” said Pat Cruz, director of Harlem Stage. The organization receives approximately $125,000 a year from the city, and has reduced its annual operating budget from $3 million to $2 million since 2014, according to Cruz. She also says that corporate support for Harlem Stage has gone down in recent years. “Unless we receive an increase in funding, we are going to see a lot of visionary programming shut down, and I’m not just talking about Harlem Stage.”

Approximately 70 performance venues have closed since 2008 due to insufficient funds, according to Guy Yedwab, the managing director of the League of Independent Theater, an advocacy group representing theater groups in New York City. Many of the League’s members apply for grants from the city each year. Often, groups will receive funding from the city one year, but not the next, according to Yedwab. The New York International Fringe Festival is one of these groups. “They’ve gotten it so many times in the past, I’m sure it doesn’t come down to an issue of quality. There’s just not enough money,” he said.

Half of the $40 million increase in funding proposed by the City Council would go toward the Department of Cultural Affairs’ grant-making capacity, almost doubling it, and directly impacting independent organizations like the members of the League of Independent Theater. Meanwhile, the $20 million increase in funding the City Council suggests be allotted to cultural organizations built on city-owned land, like museums and botanic gardens, would help these institutions keep up with growing attendance due to the city’s municipal identification card program, IDNYC, which comes with free membership to CIG member institutions and other participating cultural organizations.

The size of the Brooklyn Children’s Museum membership pool has almost tripled due to the program, according to the director of external affairs for the museum, Lucy Ofiesh. “The expansion in our membership was a welcome change but surely had some fulfillment need associated with it,” she said. The museum’s operating budget is $5.1 million, $1.6 million of which comes from the city, according to Ofiesh. “We see about 30 percent of our audience for free every year, and that number continues to grow. So our need for public funding continues to grow, as well,” she said.

Likewise, the Queens Museum, which reopened in 2013 after undergoing renovations funded by the city, has added 3,700 new members through the IDNYC program. While welcome, this growth has come with increased personnel costs, according to the museum’s deputy director, David Strauss. “There’s always a private funder who is willing to fund initiative A or exhibition B, what there isn’t is a foundation that is really excited to fund your security guards, your bathroom cleaners,” Strauss said. The funding that CIG member institutions receive from the Department of Cultural Affairs typically goes toward these types of operational costs. “It’s just going to be an untenable situation if more people are coming in and we cannot afford more toilet paper,” Strauss added.

While IDNYC has brought many more people through the doors of the city’s cultural institutions, it has not brought in enough revenue to account for the costs, much less improve bottom lines beyond them, according to several leaders of CIG member organizations.

Asked about the push for more funding for the Department of Cultural Affairs, mayoral spokesperson Rosemary Boeglin said in a statement that the city “is proud to be the largest local funder of arts and culture in the United States.” Boeglin highlighted the IDNYC program, which was implemented by the city in 2015, and the mayor’s 2014 increase in funding for art education in schools. “We look forward to continuing our close work with partner organizations and the City Council to provide access to awe-inspiring and mind-opening cultural experiences for all New Yorkers, and to discussing all of the council's budget priorities as we approach budget adoption,” she said.

This is not the first time de Blasio has been asked to increase funding for cultural affairs in the city budget. Last year, One Percent for Culture asked the mayor to increase the budget by $30 million, without the backing of City Council members.

“The letter from City Council built out of our campaign last year,” said Heather Woodfield, the director of One Percent for Culture, which is a partner project of the 501c3 organization The Fund for the City of New York.  “We came together later in the [budget negotiations] cycle last year, but we found that our strength was aligning together.”

This year, One Percent for Culture launched a public campaign, symbolized by the hashtag #NYCinspire, to build public awareness about the need for increased funding for cultural affairs. The group’s goal is to get more residents of New York City through the doors of all cultural organizations in the city, according to Woodfield. “We are dedicated to increasing access for all New Yorkers to experience and create arts and culture. That means increasing educational opportunities for both youth and for adults and seniors. It also means increasing the workforce in the arts,” she says. (One Percent for Culture is unrelated to Percent for Art, a mandate passed in 1982 that requires one percent of the city’s construction budget go toward public artworks.)

The campaign has brought Council members’ attention to the role of culture in New York City’s economy, according to Council Member Laurie Cumbo, who ran an arts organization in Brooklyn that receives city dollars before running for City Council. But, Cumbo says that this may not be enough to guarantee the petition’s success. “Overall, there is a lack of understanding at this time of the power of the arts in New York City,” she said. “We don’t have a thorough understanding of the power of these institutions as it pertains to employment, tourism, a decrease in violence in our communities, or to the cultivation of artists.”

The City Council passed legislation last year that calls for the development of a Cultural Plan that is intended to answer many of these questions, according to Cumbo. The plan is in development now and will be released in July 2017.

In the meantime, One Percent for Culture will continue to ask Mayor de Blasio to increase the cultural affairs budget, according to Woodfield. “If we don’t get the $40 million this year, we will keep asking,” she said.“We will be talking to lawmakers after the budget is finalized this year and will be formulating a new ask.”

Note: this article has been corrected to reflect that The Public Theater is part of CIG.