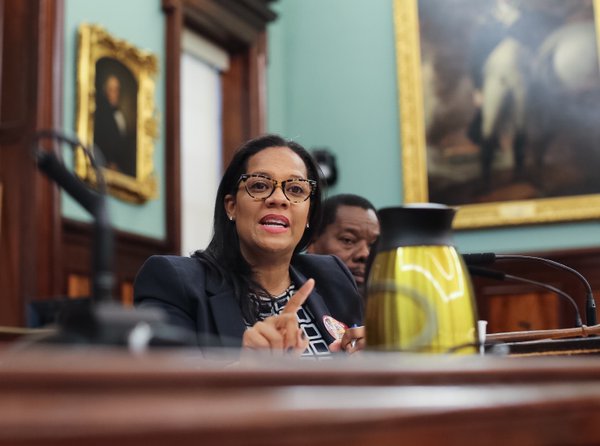 Representatives from the de Blasio administration testified in “strong support” of a package of legislation to make feminine hygiene products readily available and free in New York City public schools, shelters, and correctional facilities on Thursday at the City Council’s first hearing on the bills since they were introduced in March.

The potential cost of the mandates, which will be in the millions of dollars annually, and the technical aspects of implementation were not heavily examined during the initial hearing. “We would like to agree to the language of the bills” before addressing the cost, Khalili said. “If we’re in full agreement with some of the technical changes, then we can move to the cost of the bills.”

The three bills are spearheaded by City Council Member Julissa Ferreras-Copeland and Council Speaker Melissa Mark-Viverito, the lead sponsors, and the hearing comes just as New York State is set to eliminate the so-called “tampon tax” - the sales tax on feminine hygiene products.

The main “technical changes” the administration wants to see addressed have to do with the bill, introduced by Mark-Viverito, requiring the Department of Health and Mental Hygiene to provide feminine hygiene products to all female residents in temporary shelters, here meaning Department of Homeless Services family shelters and single adult women shelters, Department of Youth and Community Development shelters, and Human Resources Administration domestic violence shelters.

“The Department of Social Services strongly encourages the Council to include all Department of Homeless Services and Human Resources Administration shelter facilities in the bill,” Khalili said. “This expansion will ensure maximum distribution of feminine hygiene products to all clients who require such products, including those in HIV/AIDS Services Administration (HASA) shelters and at single adult male shelters.”

The city is concerned that the current language of the bill would exclude transgender men or intersex individuals who still menstruate but reside in Department of Homeless Services single male shelters or HASA shelters from the expanded access to these products. Women also reside in HASA shelters, Khalili said, and the language of the bill should be altered in order to be fully inclusive.

Additionally, the administration would like to “work with the Council to limit the definition of feminine hygiene products to only include tampons and sanitary napkins,” Khalili said. Unlike the bills to improve access to tampons and pads in schools and prisons, the bill to improve access to feminine hygiene products in shelters designates a broader list of menstrual products, including “tampons, panty liners, menstrual cups, sanitary napkins,” and leaves it open to “ any other similar items” principally used for menstrual hygiene.

“Limiting the definition means that HRA and DHS would not be responsible for providing specific brands or products that are unavailable locally or domestically,” Khalili added. Members of the Council’s Committee on Women’s Issues, which held the hearing under the leadership of Chair Laurie Cumbo, were receptive to working on adapting the language of the bill.

The administration expressed support for Ferreras-Copeland’s bill requiring the city’s elementary, middle, and high schools to provide students with direct access to free feminine hygiene products in school bathrooms as is, though left the door open for further conversations on “technical amendments” to the bill, and was similarly supportive Mark-Viverito’s bill requiring the Department of Corrections to provide inmates with feminine hygiene products immediately upon request.

Ferreras-Copeland and the Department of Education have already worked to expand a pilot program of free tampons and pads by installing 380 free dispensers in the girls bathrooms in 25 middle and high schools in Queens and the Bronx since March, providing access to free tampons and pads to the 11,600 girls attending the schools in the program.The principal at Arts and Business attributes a 2.4 percent increase in attendance rates in the months after the dispenser was installed to tampons and pads being freely available.

The program has been very well received by both parents and students, and the products will continue to be made available through the 2016-2017 school year, said Aloysee Jarmoszuk, chief of staff for the division of operations at the DOE.

Jarmoszuk estimates that it would take eight to 14 weeks and cost somewhere between $2 and $5 million to expand the program to all public schools throughout the city, and “possibly about a million or two less than that to maintain it.”

Representatives from the Food Bank for NYC, Care for the Homeless, Planned Parenthood of NYC, National Institute for Reproductive Health, New York Lawyers for the Public Interest, Brooklyn Defender Services, PowerPlay NYC, and the United Federation of Teachers all came to testify in support of the legislation, as did activist Jennifer Weiss-Wolf and Congressional Rep. Grace Meng of Queens, who has introduced a bill in Congress that would reclassify feminine hygiene products so that they can be purchased with flexible spending accounts.

Warden Michelle Clifford testified that she was not aware of any complaints from inmates regarding access to feminine hygiene products, though Andrea Nieves from Brooklyn Defender Services refuted that claim, saying that is not what she has heard from women she represents.

Nieves believes the current policy of “providing women with unusable quality hygiene products in insufficient quantities after repeated requests does not meet the spirit of the bill as proposed.” Though there is more to be done to improve access to these products for women in prison, Nieves says, the hearing and the bill do represent “important first steps in codifying a right for women incarcerated in city jails to access feminine hygiene products.”

Advocates had a few other suggestions for improving the bills, like Sola Stamm from New York Lawyers for the Public Interest, who recommended changing the language from “feminine hygiene products” to “menstrual hygiene products,” a more inclusive term which acknowledges the “spectrum of gender identities who experience menstruation.”

Stamm also suggested that the bill to make tampons and pads available immediately upon request in prisons ought to be extended to immigration detention facilities in New York as well in order to expand access to civil detainees held within those facilities.

The bills could also be improved, said Stephanie Gendell, associate executive director for policy and advocacy at Citizen’s Committee for Children of New York, by involving the Administration for Children’s Services to extend increased access to menstrual hygiene products to young women in the juvenile justice system.