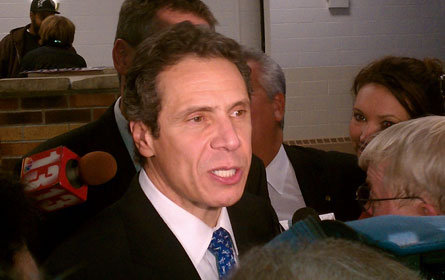 Photo by David King
Andrew Cuomo in Albany on Monday

Andrew Cuomo, who spent years in Albany working for his father and then tried unsuccessfully to become governor in 2002, was resoundingly elected to the state's highest office Tuesday.

Eric Schneiderman will replace Cuomo as attorney general. In the race for the third statewide office -- comptroller -- incumbent Thomas DiNapoli appears to have won election to the seat he was appointed to almost four years ago. A victory for the three Democrats -- all with long careers in Albany -- comes after four years where the state's government -- and Democrats in particular -- have been beset by scandal and charges of incompetence.

On a night when Democrats suffered many defeats around the country -- including the loss of the House of Representatives -- New York's two incumbent Democratic senators, Charles Schumer and Kirsten Gillibrand, scored convincing victories over two little known, poorly funded opponents. One member of Congress from the city, Michael McMahon, fell victim to the national Republican wave.

While almost all New York City incumbent members of Congress and the State Legislature won their races -- many without braking a sweat - the question of who would control the State Senate in January remained in doubt. One city election could prove crucial: District 11 in eastern Queens where Democrat and former City Councilmember Tony Avella defeated veteran State Sen. Frank Padavan.

Cuomo, along with his running mate, Rochester Mayor Robert Duffy won support from all parts of the state and most demographic groups.

Aside from a brief uptick in one poll following his primary victory, Buffalo Businessman Carl Paladino lagged in the polls and fundraising and never seemed able to shake the image of "crazy Carl," as the Daily News always called him. Paladino was his own worst enemy. What he described as his refusal to be politically correct, led him to talk repeatedly about his opponent's sex life, send out obscene emails and rant against gays.

In his victory speech, Cuomo said he understood that New Yorkers were angry and frustrated about the dysfunction in Albany, but the opposition misjudged New Yorkers when they "tried to exploit the anger and the fear and divide us."

"People of this state listened to their better angels," the governor-elect said. "We are one, were are united, we believe in community â€¦ and we are not going to let you divide us."

In terms of what he would do as governor, Cuomo said he had a mandate "to clean up Albany and have elected officials represent the people of this state -- not special interests and lobbyists." Echoing the fiscal conservatism that characterized his campaign, he said New Yorkers wanted the state to balance its budget and its government "to realize there is no economic future for New York if we are the highest tax state in the nation."

Whether he can do that, of course, will be a key question of the next four years. No one thinks, however, that it will be easy.

For his part, Paladino's concession speechseemed unlikely to disappoint those who appreciate his combative style. "We’ve got their attention,” Paladino said in downtown Buffalo, “and it is our duty to keep our voices raised, keep our pitchforks at the ready and never surrender.”

Polls had seen the contest between Schneiderman, a liberal state senator from Manhattan, and his GOP opponent, Staten Island District Attorney Dan Donovan, tightening to a virtual tie in the last few days. Donovan had support from Mayor Michael Bloomberg, who appeared with former Mayor Ed Koch in an ad for him. Several of the mayor's friends made large donations to the Staten Islander in the closing days of the campaign. Despite that, Schneiderman outspent Donovan by more than two-to-one.

As a member of the senate, Schneiderman was seen as having been tarnished by charges that members of the body's leadership were involved in a rigged bidding process for a casino at the Aqueduct racetrack -- although Schneiderman himself was not mentioned.

Schneiderman had pledged to continue to police Wall Street, while Donovan rejected the idea, which sent some large donations his way.

In the end, Schneiderman pulled out a convincing victory, defeating Donovan by a margin of about 12 percentage points. Some commentators attributed this to union enthusiasm for Schneiderman.

Wall Street played an even more central role in the race for comptroller. Harry Wilson, a former Wall Street executive who served on President Barack Obama's car panel, presented himself as someone with financial expertise who could use the office to put New York's messy finances in order and reduce spending. Wilson won the endorsement of all three city daily newspapers, Bloomberg and others, and used $4 million of his own money Wilson spent almost twice as much as DiNapoli.

For his part DiNapoli, who was appointed comptroller after Alan Hevesi was forced to step down, tried to turn Wilson's Wall Street background against him and pointed to improvements he said he had made since taking over the office.

The contest between the two men remained neck and neck, although at around 1:40 a.m., NY1 declared DiNapoli the projected winner. Wilson did not concede, saying it was too close to call and he remained "hopeful that I will prevail in my campaign to bring fiscal accountability to Albany and professionalism" to the comptroller's office.

DiNapoli, though, having won without the endorsement of the man at the top of his ticket -- Cuomo -- was happy to celebrate. His "victory shows it’s not about the polls, nor the pundits, nor the papers," he said in a statement. "It’s about the people."

Despite the problems in Albany and the urging of the Daily News and others to vote against incumbents, most members of the state legislature from New York City won re-election easily. Padavan, who narrowly escaped being run out of office in 2006, may prove to be the only exception.

In 2006, Padavan, who has served 36 years in the legislature, attributed his near defeat to the large vote for Obama in his district. This time, though, Padavan has the dubious distinction of being the rare incumbent Republican defeated in a banner year for the GOP -- at least outside of New York.

Also defeated was incumbent Assemblymember Janelle Hyer-Spencer whose 60th district included parts of Brooklyn and Staten Island. She lost to Nicole Malliotakis by a margin of about 10 percentage points. Although her father is Greek, Malliotakis' mother is from Cuba, making her the first person of Hispanic descent to be elected on Staten Island.

Al the city's members of Congress -- all of them Democrats -- also kept their jobs except for McMahon. The former City Council member won the seat, which had been Republican for decades, in 2008 after Councilmember Vito Fossella decided not to seek re-election.

Running without the support of many in the Staten Island GOP establishment, Michael Grimm, a former Marine who had worked for the FBI, defeated McMahon by almost 4 percentage points.

In one of two City Council races on the ballot this year, Ruben Wills appears to have defeated Nicole Bell, the widow of Sean Bell who died in a barrage of police gunfire on the early morning of his wedding day in 2006. Five other candidates, including former City Councilmember Allan Jennings, lagged behind the two leaders, in a spirited contest to replace Thomas White, who died earlier this year.

City Councilmember David Greenfield also appeared on the ballot for his Brooklyn council seat, but was unopposed.

City voters overwhelmingly approved the two ballot questions crafted by the city Charter Revision Commission. The measure on term limits -- restoring the two-term limit but not for any city official now in office -- received a yes from 74 percent of voters who turned over their ballot.

The other question -- which included financial disclosure, mapping of city facilities and so on -- passed by an even larger margin.