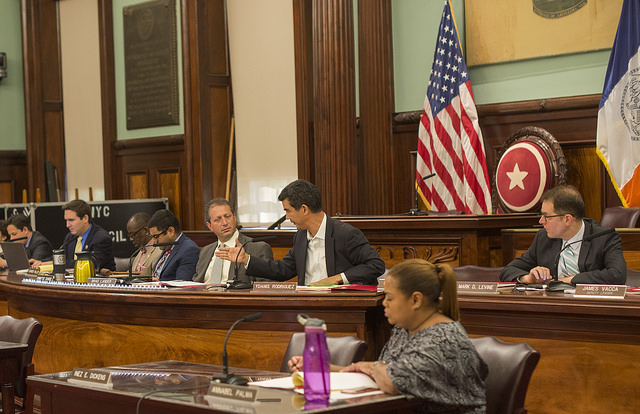 Late last Friday night, many New Yorkers—especially elected officials—looked on as lawmakers in Albany made a frenzied effort to pass legislation hours after their session had been scheduled to end. Although most of the legislation classified as statewide, or “general” laws, several bills would impact a select few regions or New York City specifically, most notably, perhaps, mayoral control of New York City schools.

While Mayor Bill de Blasio was again given a one-year extension of school control, there were other city-specific issues at hand -- granting disability benefits to city firefighters, extending construction authorities for some city agencies, among others.

The state legislature often has free reign to pass laws that override local autonomy, but in certain cases it must seek local approval first (cities cannot pass laws that override state law). Known as “home rule” and intended as a check on state government power, a clause in New York’s constitution dictates that Albany can pass “special laws” that only affect specific counties—but only if the legislatures of affected counties sign off.

Most recently, the New York City Council passed four resolutions June 8, pre-approving of special bills in Albany allowing the city to allocate Bronx park land to a children’s museum, providing disability benefits to FDNY workers, encouraging building in unmapped areas of the city, and extending death benefits for city sanitation workers. All but the sanitation workers’ benefits bill were passed in Albany by the end of the legislative session.

City Hall passage of these home rule resolutions nearly mirrored the last-minute frenzy in Albany, with Council members quickly moving bills through committee and the full Council as the clock was ticking in the capital. To do so, the Council reopened a recessed full-body Stated Meeting on June 8, bumping back a previously scheduled June 9 Stated Meeting, and moving several committee hearings (Committee on Public Safety, Committee on Oversight and Investigations, and Committee on General Welfare) to accommodate. The Council also slotted in a hearing of the Committee on State and Federal Legislation earlier that morning in order to pass the four resolutions on to the full body for passage.

"Obviously when the legislative session at the state level is in its last days, we always leave our [stated] meetings open in case we have to come back at the last minute to vote on a home rule,” City Council Speaker Melissa Mark-Viverito explained when asked by Gotham Gazette at a recent press conference. “There’s some legislation at the state level that needs a home rule. So we determine what are the things that we would want to vote on."

All the machinations shed light on both home rule and city-state dynamics, as well as the workings of the city and state governments and communication between the two.

According to a spokesperson for Council Speaker Melissa Mark-Viverito, the last-minute rescheduling was done to give Albany enough time to pass the bills before the end of its session, which wound up going on about 30 hours longer than had been expected. It remains unclear, however, exactly why the Council waited until so late in June to rapidly pass the resolutions given that the four bills were introduced in Albany months ago. Repeated questions to Council spokespeople went unanswered.

Lawmakers in Albany do not always have to rely on approval from City Hall to pass laws that target New York City. Thanks to cloudy wording in the state constitution and complex legal precedent, home rule has exceptions: courts have ruled that Albany lawmakers can pass any special law, regardless of whether it has New York City Council approval, so long as that law qualifies as an issue of “substantial state concern.”

When city and state legislatures disagree over the extent of home rule’s protections, precedent typically favors the state, according to the Community Environmental Legal Defense Fund, a firm that provides legal assistance to municipalities attempting to expand local authority.

Although Margil said she is not familiar with the home rule situation in New York specifically, the precedent set by a 2013 ruling of the State Court of Appeals seems to confirm her theory. The year before, Mayor Michael Bloomberg pushed for passage of a state bill that would authorize him to sell $1 billion in new taxi medallions—a power usually reserved for the City Council, which had already rejected Bloomberg’s pitch. Albany passed the bill without the Council’s approval, a move that a State Supreme Court ruled unconstitutional in 2012. This decision was then overturned by the Court of Appeals on the grounds that taxi services in the city had economic repercussions of “substantial State concern.”

Because so many local issues could have implications beyond municipal borders, Albany has the advantage given this legal precedent. In a recent display of state authority, state lawmakers voted at the end of session to extend mayoral control of New York City schools by just one year, tacking on caveats that force Mayor Bill de Blasio to release school budget reports and allow charter schools more flexibility in choosing their authorizers. It is state, not city, law that dictates the structure of education policy-making in New York City and while de Blasio and others have called for making mayoral control of the schools permanent, Albany lawmakers have not been willing to give up power over renewal at whatever length intervals they deem.

Albany can dodge home rule by creating general laws meant to apply to all cities—even if, in reality, they only apply to one. This is also the case with mayoral control, where the law’s wording applies to cities with populations over one million, thereby taking the form of a general law while only affecting New York City. Mayoral control of schools is one flashpoint in the antagonistic relationship between de Blasio and state Senate Republicans, who control that chamber and de Blasio attempted to oust from power during the 2014 elections.

Relations between de Blasio and Gov. Andrew Cuomo also have significant city-state power dynamics, with the state having a great deal of power over city funds, policies, and infrastructure. The ongoing feud between the two Democrats has led to questions around how the state is using its levers of power to support or undermine de Blasio’s agenda.

There are many areas where the city needs state sign-off, like around the number of stoplight speeding cameras it can install and the use of federal bonds for affordable housing, the latter having come into play in the de Blasio-Cuomo saga.

Meanwhile, the state Senate passed a bill earlier this month that would block cities from passing fees on merchandise bags, nullifying a yearslong effort by New York City Council members to pass a law imposing a five-cent fee on plastic shopping bags that was just approved this spring. The coup was actually led by members of the Legislature - in both houses - that represent parts of the city, where local City Council members had tried in vain to stop the bag fee bill.

Without any protection granted by home rule, the City Council entered a deal with state legislators that would delay implementation of the fee until an “agreement” could be reached. The Council modified the bill to extend the timeline. At a press conference on Tuesday, Mark-Viverito railed against opponents—ostensibly in Albany—who did not respect the Council’s local authority.

“We are the legislative body for the City of New York. We are the ones that have been elected by the constituents here in the city to basically guide this body, to lead this household,” Mark-Viverito said. “We don't do things from one night to the next, we have a very open process in this Council where we deliberate on issues, and the bag bill in particular was debated extensively…so we would hope that that would be honored and that would be respected.”

The plastic bag fee law was promoted as an anti-pollution cause and, following the introduction of the state bill, lawmakers in Albany were criticized for bowing to the will of plastic bag-manufacturing lobbyists. This situation is emblematic of those which the Community Environmental Legal Defense Fund aims to prevent—where a state legislature’s interests override issues with local support. Home rule is intended to prevent such total state control, but usually fails, according to Margil.

“Routinely, we see corporations working with state legislatures across the country to put in place pre-emptive state laws which prohibit communities from doing anything related to their industry,” Margil said. “It's this way across the country.”

Establishing more effective home rule protections for municipalities typically requires the establishment of a local Bill of Rights tied to existing chartered home rule, according to CELDF. Altering New York’s State Constitution is a lofty goal, but many are already looking ahead to the next statewide referendum on whether to convene a constitutional convention, with the vote coming in November 2017. Governor Andrew Cuomo advocated for a constitutional convention in an interview with The New York Times last weekend when he implied holding one would be necessary for campaign finance reform. “The people are going to have to do it,” he said of closing the infamous LLC loophole.