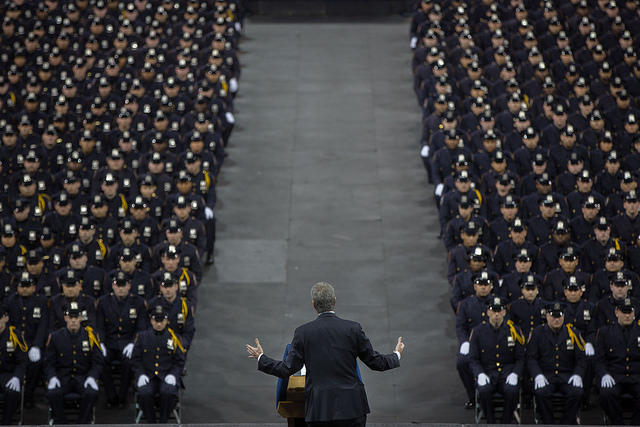 On June 28, the PBA filed a Declaration of Impasse with the New York State Public Employment Relations Board (PERB) asking it to appoint a mediator in the negotiations over a contract that goes back to 2012. The union, which represents about 24,000 officers, is the only uniformed service agency without a settled contract with the city -- the other 11,000 members of the NYPD, firefighters, sanitation workers, and corrections officers are all under contract.

After filing the declaration, PBA President Patrick Lynch took the occasion, as he often does, to criticize Mayor Bill de Blasio publicly. “We are hopeful that an independent, third-party mediator can restore a sense of fairness to a process that has been taken over by the Mayor’s insistence on playing politics,” Lynch said, in a statement accompanying the announcement, “and provide our members with a contract that will allow them to provide for themselves and their families.”

It was the latest salvo in a protracted process, accompanied all along with a public campaign by the PBA that, for the most part, has decried what it says are increasingly dangerous conditions faced by police officers without saying much about how cops are performing or the role they have played in bringing crime in the city to historic lows. Instead, the PBA’s message -- backed up by an internal survey of its members -- is that the city is headed in the wrong direction, that there is increasing disorder and police officers on the ground are bearing the brunt of it.

“Everyone else wanted to have productive dialogue and resolve outstanding issues,” said Mayor de Blasio, at an unrelated news conference on Wednesday, referring to other uniformed unions that have settled contracts. “How did we get to the progress on disability with sanitations, with corrections, with the fire fighters? Productive, respectful dialogue…The only one that stands apart consistently is the PBA and I don’t think that’s helping the members.”

Last year, when the PBA and city went into a binding arbitration over their contract and arbitrator Howard Edelman awarded the union 1 percent raises for 2011 and 2012, off-duty officers publicly protested the decision. The current offer on the table, for 2012 through 2015, is for a zero percent raise for the first six months, and 1 percent each year for the following four years. The PBA believes this doesn’t go far enough, that it’s less than the rate of inflation, and that they are paid at least 30 percent less than other uniformed unions at both local and national levels.

On the other side, the city insists it pays police officers nearly 150 percent of the average of large U.S. cities and that it has followed the same pattern as other uniformed unions, offering the PBA 11 percent raises over seven years, which it rejected. A mayoral spokesperson said they are expecting a decision from PERB on the PBA’s request for a mediator perhaps next week. If that mediator cannot resolve the issues in the negotiations, the process moves to a binding arbitration.According to Politico NY, a PERB ruling would apply for 2012 through 2014. The sides would then pick up negotiations again for the subsequent years.

“Since taking office, we have tried again and again to work with the PBA to provide their members with a fair long-term deal with significant raises and benefits – a deal like the ones every other police and uniformed union accepted,” said the spokesperson, Freddi Goldstein, in an email. “The PBA has been unwilling to negotiate, instead choosing to wage a political war and go to arbitration - again.” 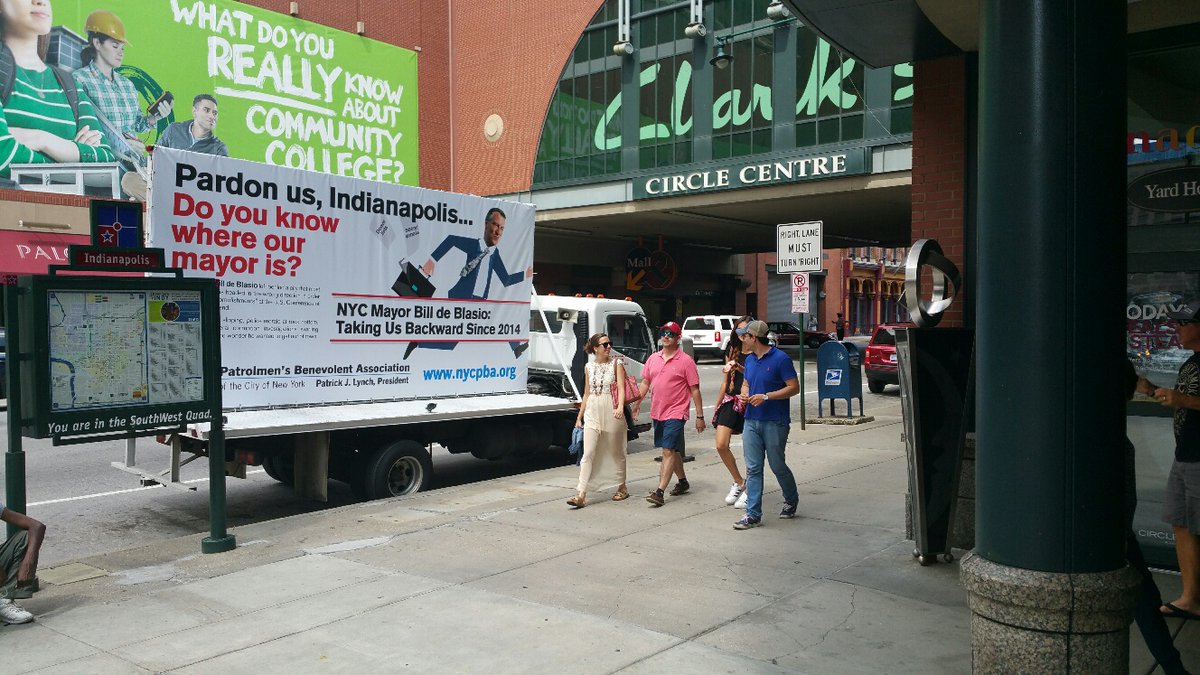 The PBA’s well-funded public effort to influence the negotiations and criticize the mayor, has taken a number of forms: flyering by members (including Lynch) in April; a television ad in May; radio ads calling on the mayor to be fair to police officers; and a full-page newspaper ad accompanied by a billboard truck when the Mayor visited Indianapolis for the U.S. Conference of Mayors (left). Throughout, the message remains the same: police officers increasingly feel unsafe in doing their jobs; unsupported by the de Blasio administration and the City Council; undermined by a slew of new bills and policy initiatives; and unable to support their families on the inadequate pay they receive.

In the overall message being put out by the union, there is little focus on police officers’ performance.

“I would think that any union would want to celebrate the good work of their members,” the mayor said at an unrelated news conference on Wednesday, when Gotham Gazette asked about the PBA’s public campaign and its focus. Emphasizing that crime numbers are at “unbelievable” lows, the mayor added, “They should be celebrating. They should be thanked. So the notion of their own union denigrating what they achieved makes no sense to me and that is not the way to achieve anything in contract negotiations.”

Suffice it to say, the PBA does not agree with the mayor and its representative quickly refuted the argument that the union has not focused on officer performance.

A PBA spokesperson, in a phone interview with Gotham Gazette, said the PBA has clearly and repeatedly stressed that their officers are doing “a terrific job” and that is one of multiple considerations in the negotiations. “That’s actually been an argument and position of the unions going back to the mid ‘90s,” said the spokesperson of the police force’s strong role in reducing crime in the city. “We continue to maintain that position,” the spokesperson added.

But at the same time, the spokesperson said, officers are under duress, understaffed, face more challenges, more paperwork, more oversight and scrutiny, and suffer from rock-bottom morale. The spokesperson also added that the de Blasio administration’s labor policies have been “worse than any other administration” and the city has refused to provide sufficient pay raises to cops at a time when it’s flush with cash - the sides are “worlds apart,” the spokesperson said.

In a statement emailed to Gotham Gazette, PBA President Lynch said, “Our members were instrumental in the historic decline in crime over the past 20 years. Now, with 6,000 fewer officers - who are under heightened scrutiny and have increased responsibilities - we have still been able to keep a lid on crime in New York City."

Former NYPD officer and professor at John Jay College of Criminal Justice Eugene O’Donnell said the PBA’s public campaign is “really about internal politics” and a sense of anger and disappointment among police officers.

“It’s meant to go after the mayor, who according to [PBA’s] poll is disdained by their membership,” O’Donnell told Gotham Gazette. “If you were having an ordinary negotiation, you would try to project a positive message and build a rapport with the other side. There’s no advantage to that…All that’s left to do is rain down damage on the administration for what they perceive to be making their job unbearable.”

O’Donnell also says that since the police unions don’t have the right to strike, they have to use other means to get their message out.

PBA leadership’s disdain for the mayor has been long in the making. De Blasio came into office on a platform of criticizing the NYPD and promising reform. Some of his close allies, such as Rev. Al Sharpton, have been fervent critics of the police department. His hiring of Rachel Noerdlinger, Sharpton’s former spokesperson, also irked police unions. Noerdlinger’s boyfriend was a convicted killer and made anti-cop statements on social media. De Blasio then went on to defend Noerdlinger from related uproar before she stepped down. The mayor has also publicly stated his concern about racist policing practices and said that he trained his biracial son Dante to be careful when dealing with the police. Eventually, the tensions between the mayor and police boiled over when two officers were shot dead in Brooklyn in Dec. 2014. At the hospital and the funerals, rank-and-file officers turned their backs to the mayor.

Since then, de Blasio has gone out of his way to ease the relationship and show his support for the police. He worked with the City Council to fund 1,300 new officers on the force and has stood by the police even when faced with criticism from his closest allies. He has vehemently supported Commissioner Bill Bratton, who is largely popular with rank-and-file cops, and Bratton’s signature Broken Windows policing strategy, which the unions support.

Dr. Christina Greer, associate professor of political science at Fordham University, said the PBA would gain more sympathy if it focused on a performance-based argument, which is easily measurable by outcomes in the city’s crime rate. “I think if they went with that strategy, it would help in the court of public opinion,” she said, insisting that their current arguments largely fall flat.

Just this week, de Blasio and NYPD officials released new statistics that showed some of these measurable outcomes. Murders and shootings were down in the first half of this year over last, with overall major crimes in the month of June at the lowest they’ve ever been in city history. De Blasio called it the “ultimate team effort” by the NYPD and said the numbers suggest changes in the city that will have long-term effects. “[T]his is a really powerful moment where the NYPD is getting to do things that it’s always wanted to do,” he said at a news conference on Monday where the data was released. “It’s now getting the chance to do them and to change the lives of people in all the neighborhoods of this city.”

Police reform advocate Bob Gangi, director of the Police Reform Organizing Project, said PBA President Lynch’s “aggressive public rhetoric is like throwing red meat to the legions in his union. Perhaps his intention is to distract people from his failure as a leader to obtain for his members a new contract.”

Gangi disagrees with the PBA’s claim that a police officer’s job had become more dangerous. Citing the killing of the two officers in 2014, which the PBA has often relied on as a case of the dangers their members face, Gangi called it an “aberrational” incident without any discernible pattern. “If that’s the sole rack that they’re hanging their hat on, I think it’s a weak argument,” he said. Along with Wenjian Liu and Rafael Ramos, who were killed in Dec. 2014, there have been two other police officers killed in the line of duty since de Blasio took office: Brian Moore in May 2015 and Randolph Holder in Oct. 2015.

The PBA has spent hundreds of thousand of dollars on its effort, but the administration has not budged. De Blasio has 98 percent of the municipal workforce under contract, including all the other uniformed unions. While he can negotiate from a position of power, the police union may also be the most delicate in terms of public relations - no mayor wants to be seen as anti-cop. Still, the mayor has the low crime numbers to boast.

“I think it is a counterproductive strategy,” de Blasio said on Wednesday of the PBA citing increasing disorder instead of strong job performance by officers. “It certainly has not changed the way we comport ourselves. We work with people who want to work with us productively,” he said of negotiations.

But the PBA does not seem like it will back down from taking the mayor to task, whether it be over the contract proposals or police reform initiatives introduced at various levels. “We’re an advocacy group,” said the PBA spokesperson. “That’s our job.”