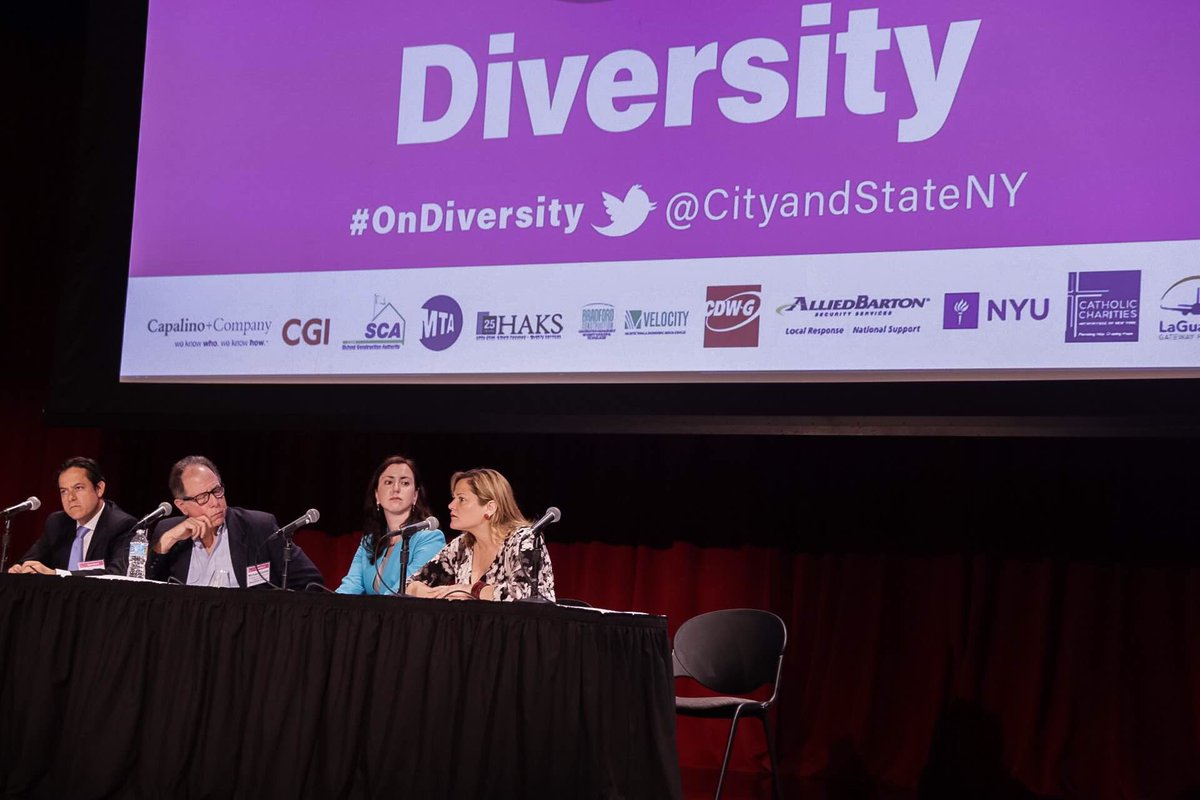 The "On Diversity" panel; photo via William Alatriste for the City Council

What are "women’s issues"? When should men recognize their privilege and stand down? Speak up? How do women in public life talk about everyday sexism and engage men in that dialogue?

These were just a few of the questions asked on Tuesday during one panel discussion at City & State NY’s annual “On Diversity” conference. Elected officials, business professionals, journalists, members of academia, and others gathered to discuss issues of race and gender in public life, especially related government and doing business with it.

City & State columnist Alexis Grenell moderated the panel discussion on gender equity, norms, and policies with New York City Council Speaker Melissa Mark-Viverito, City Council Member Dan Garodnick, State Assembly Member Nily Rozic, and Michael Kimmel, professor of Sociology and Gender Studies at Stony Brook College. The discussion revolved around gender equality both in the workplace and the home, as well as how gender issues are defined within government, the press, and the broader public.

While the discussion addressed what is often a divide between men and women on certain political issues and how they are framed in public discourse, the dynamics of the discussion itself also reflected these issues. In a conversation fraught with potential landmines, the three elected officials on the panel spoke from differing personal experience, but all with a largely common perspective. Throughout, Garodnick and Kimmel - the two men on the stage - stressed the importance of redefining women’s issues as gender or family issues and the importance of recognizing men as stakeholders within the framework of these issues. The women - Grenell, Rozic, and Mark-Viverito - agreed.

Meanwhile, Mark-Viverito and Rozic also focused on the importance of having women in elected office and that of including women’s perspectives when discussing issues that directly affect women. Mark-Viverito is the first Latina to be Speaker of the City Council; Rozic was the youngest woman in the Assembly when she was elected.

“How do we include, get more women into politics - because our perspective is essential - but also...how do we give men the toolkit to understand when to back off a little bit of that privilege, right? So when do men have to stand down when a woman is speaking, perhaps? And also maybe when do we not include men enough when they should be stakeholders? So how do we walk that fine line?” she asked the panel at one point.

Kimmel discussed the role men have as stakeholders when it comes to what are traditionally referred to as women’s issues, such as paid parental leave, reproductive rights, and sexual assault on college campuses. He emphasized the need to redefine the issues to include men by saying that “we cannot fully empower women and girls unless we engage boys and men.”

Garodnick discussed his experiences with gendered expectations and stereotypes. He recalled the period in which he took paid parental leave, and despite being fully engaged in the parenting process during that time, he said he also felt pressure to project a certain image to his colleagues and peers while doing so, namely that he was still busy with work while on leave.

Kimmel also called for the politicization of the familiar relationships men already have with women. “We don’t enter [the conversation on gender issues] as men,” he said. “We enter as sons and as fathers and as husbands and as partners...every man in this room knows what it feels like already to love a woman and want her to thrive. We need to just make that political, public.”

While Mark-Viverito and Rozic both acknowledged the importance of men recognizing their place as stakeholders on certain issues, they both maintained that having women in positions of power and continuing to challenge sexism present within government and the workplace in general are the most effective ways to achieve gender equity.

Rozic discussed the sexist assumptions that continue to pervade the culture in Albany, where the state Legislature she is a part of conducts its business. She recalled incidents of sexism, including an occasion when she was denied access to the Assembly floor during a roll call vote by a Sergeant in Arms who assumed, because of her gender in combination with her age, that she was not an Assembly member despite her having been in Albany for several months. Rozic also discussed multiple occasions of having been mistaken as male colleagues’ staff member, girlfriend, or wife when standing next to them during a conversation while in the workplace.

“Believe it or not, Albany is a little backwards,” Rozic said wryly early in the discussion.

“It is a very fine line maneuvering gender, in particular as a young woman, because I face...a dose of sexism but also ageism, which is a lethal combination at times,” Rozic said. “When I got elected, I was the youngest woman ever elected to the state Legislature, I get that. With that comes a lot of responsibility, but it also comes with a challenge of understanding what leadership looks like, and sort of, countering what leadership is supposed to look like.”

“I am a 47-year-old woman who does not believe in traditional marriage...And I don’t have children," she said, framing her other comments. "I made a choice in my life that I wasn’t going to have children, and the expectations or the approach that I get as a woman, right, is that somehow I’m supposed to be in that box: 'You have children, right?' And when I say "no, I made a choice that I’m not"...So I never approach a woman from the assumption that she has children because I know my own experience...And you ask, 'do you have children?' You don’t assume that they have children."

Mark-Viverito said it is essential to break down normative expectations of women. It is "not only my responsibility," she said, "it’s also men, our allies.”

The Speaker expanded the conversation to sexism faced by women in positions of power by discussing the sexism she has experienced during her career, especially in that role leading the City Council, perhaps the second most powerful position in city government. She said that the media’s perception of her decision-making and independence is indicative.

“I feel that still when you talk about issues and decisions, I still get a little bit appalled at times at the perspective of the press, that there’s this assumption that when a tough decision has to be made, somehow I made a decision, I’m in the pocket of the mayor, right?” Mark-Viverito said, referring to how the media has portrayed her working relationship with Mayor Bill de Blasio. De Blasio was influential in Mark-Viverito’s ascension to the position of speaker and there has been an ongoing narrative in news articles and political discourse that Mark-Viverito is not independent from the mayor. The speaker and her allies push back that her collaborative leadership style can be misinterpreted as weakness or a lack of independence.

“I couldn’t possibly have arrived at that decision on my own, right?” Mark-Viverito said Tuesday. “A controversial, difficult decision - somehow I had to be forced into that because I could not have made that decision on my own. That’s sexist...And when I say it’s sexist, what do I get back? ‘Oh you’re always throwing the sex card around’ or ‘the sexism card around.’ Right? ‘The women’s card,’ ‘the race card,’ whatever it is, and it’s usually men saying that.”