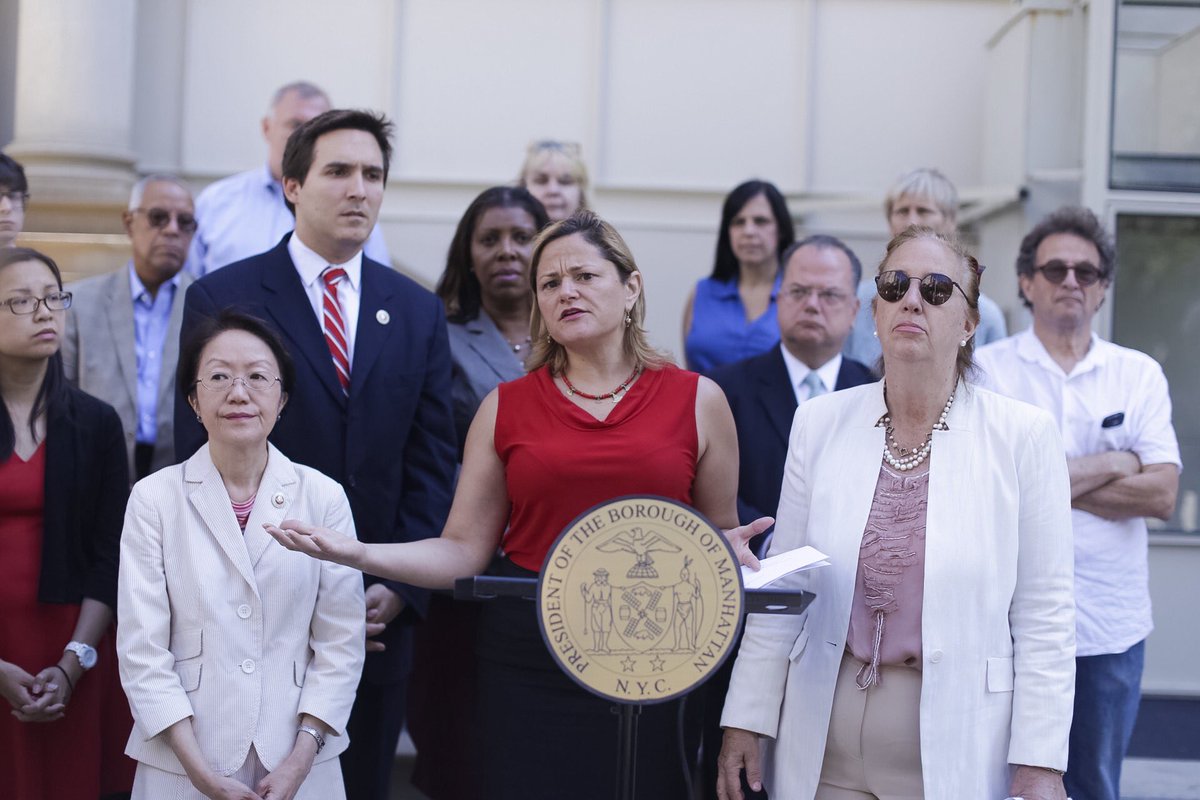 Armed with the findings of a newly-released investigation that faults City Hall for a “lack of accountability,” Manhattan Borough President Gale Brewer and City Council Member Margaret Chin called for reform to the city’s deed restriction removal process at a press conference on Wednesday outside City Hall.

In a show of strength and seriousness, Brewer and Chin were joined by Public Advocate Letitia James, City Council Speaker Melissa Mark-Viverito, and others.

The report, issued by the Department of Investigations last Thursday, found that the Mayor’s Office and the Department of Citywide Administrative Services (DCAS) failed to stop the removal of a deed restriction at 45 Rivington Street in Manhattan and neglected to weigh whether the removal was in the city’s best interests.

Because of “communication failures” between DCAS and City Hall, the site that formerly housed a not-for-profit nursing home known as Rivington House was sold to a developer of luxury condominiums without objection from the administration, according to the DOI report. Deed restrictions are in place on a fairly small number of properties around the city, often ones that once belonged to the city, and establish certain restrictions on what a piece of land can be used for. The result on Rivington House has become a point for criticism of the de Blasio administration, and the process is still under investigation by the city comptroller and state attorney general.

Brewer added that the issue would be solved by treating deed restriction changes using the same process as land use decisions, as well as passing a bill she recommended and Chin sponsors aimed at increasing transparency in the process.

Brewer refers to the Uniform Land Use Review Procedure. Unlike the current procedure for deed restriction changes, ULURP would mandate input from community boards and the borough president, and would require final action by the City Council before deed restrictions could be lifted.

The City Planning Commission is the only entity with the charter-mandated power to alter the deed restriction review process, meaning the Council must receive the recommendation of the CPC before it can enact a local law subjecting deed restriction changes to ULURP. The Commission will hold its next review session on July 25 and a public meeting on July 27.

Mayor Bill de Blasio, who appoints the CPC Chair and six of its 13 members, indicated in a July 8 press release that the CPC will adopt a series of reforms that align with some of Chin and Brewer’s suggestions, such as involving Borough Presidents and City Planning in the deed review process. He also announced that the city will re-invest $16 million in proceeds from the Rivington House sale “in the affected community on the Lower East Side of Manhattan.”

De Blasio’s plan, however, does not establish ULURP as the norm for deed restriction changes, instead favoring a plan that does not give the Council ultimate decisionmaking power in reviewing deed restriction changes. Chin said the Mayor’s plan is “not enough,” a stance that Brewer echoed. Brewer also said the $16 million restitution was “not sufficient” as securing a building the size of Rivington House for the community would cost “closer to $200 million.”

Further, Chin criticized the administration’s lack of action to discipline those responsible for overseeing Rivington House’s deed restriction removal. According to the DOI report, City Hall First Deputy Mayor Anthony Shorris was sent memos regarding the removal months in advance by former DCAS Commissioner Stacey Cumberbatch, but did not read the memos as he did not believe the matter to be important at the time.

When reached for comment, a mayoral spokesperson did not respond to Chin and Brewer’s criticisms, and instead reiterated the goals of the mayor’s proposed reforms in a statement sent to Gotham Gazette.

"The Mayor's instituting a series of reforms aimed at overhauling a broken, decades-old deed modification process. Our focus is on making sure these reforms deliver for local communities," the spokesperson said.

For her part, Mark-Viverito was careful not to condemn any City Hall officials at the press conference. She did, however, speak in support of Chin and Brewer’s proposal to grant the Council final decision-making power by instituting ULURP for deed restriction changes.

“The removal of the deed restrictions at the Rivington House and Dance Theater of Harlem wasn’t malicious but it was inexcusably sloppy,” Mark-Viverito said. “Although we cannot change the actions of the last year, we can enact measures to insure nothing like this happens again.”