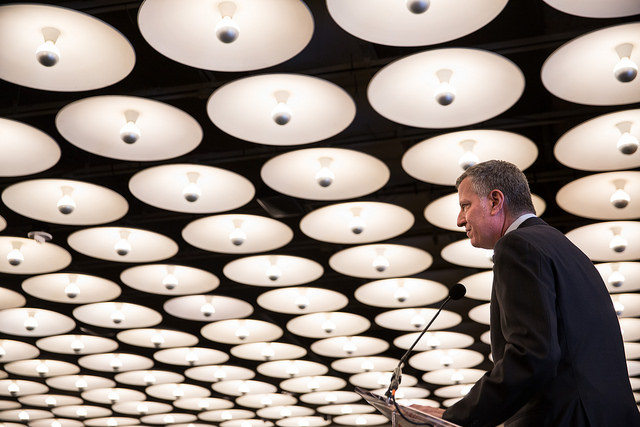 A company that has spent thousands of dollars lobbying City Hall, is doing business with the city, and whose founders have made large campaign contributions to Mayor Bill de Blasio’s campaign is now also a beneficiary of the mayor’s 2017 re-election campaign.

Campaign finance filings show that since June 2, de Blasio’s campaign has occupied a space in Downtown Manhattan run by WeWork, a company that markets affordable, professional co-working spaces and office amenities to individuals, businesses, and other groups.

WeWork has achieved success in New York City and was recently valued at $16 billion. The company has 65 locations so far, with 32 in New York City alone, and plans to expand into Asian markets. It is also one of the key partners in the $380 million Dock 72 project at the city-owned Brooklyn Navy Yard that was announced in May. The 675,000 square-foot building is being developed by Boston Properties, Inc. and Rudin Development, and was designed by WeWork. It is expected to create 4,000 living wage jobs.

In the most recent filings with the city Campaign Finance Board, de Blasio’s 2017 campaign listed three payments made to WeWork -- two payments totalling $11,500 on June 2, for office rent and a security deposit, and another $4,400 rent payment on July 1. The zipcode listed on the filing indicates WeWork’s 222 Broadway location - ironically titled “City Hall” given its proximity to the seat of city government - which has ten floors of office space, with about 1,700 people representing 450 businesses.

The campaign’s rental payment fits the company’s range for a private office accommodating between five and seven people, according to WeWork’s website. A de Blasio campaign spokesperson confirmed that the campaign is currently working out of the WeWork space, but did not provide any other details of the arrangement. “They offer a flexible space on a month-to-month basis for a flat fee, which makes a lot of sense for the campaign at this stage,” the spokesperson said in an email.

De Blasio is gearing up for his 2017 re-election bid, having upped the pace of fundraising ahead of the recent July 15 filing deadline. The campaign raised over $1.1 million between January and July and spent nearly $340,000. In total, the campaign has over $1.6 million on hand.

Meanwhile, contributions to de Blasio’s 2013 campaign have recently been the source of scrutiny after news broke that there are several law enforcement investigations into the mayor, his administration, his allies, and their fundraising activities.

In April, The Real Deal reported that one WeWork employee, Arana Hankin, was at that point the top bundler for de Blasio’s 2017 run. Hankin, identified in Campaign Finance Board filings as a WeWork senior vice president, raised $68,750 between January 8 and 11 from 16 donors, including WeWork co-founders Miguel McKelvey and Adam Neumann, who each donated $4,950, the maximum any individual can give to a mayoral candidate under the CFB system. McKelvey and Neumann’s wives also donated $4,950 each in that bundle. WeWork is not technically doing business with the city and is not in the "doing business" database with the Campaign Finance Board. If it were, its founders and top brass would be limited to a $400 contribution each, per campaign finance laws.

A recent New York Post report found possible problems with some of those bundled contributions, raising questions about potential straw donations. “We are reviewing the donations and will amend the filing if necessary,” the spokesperson for de Blasio’s campaign told Gotham Gazette in an email. A WeWork spokesperson declined comment for this story.

WeWork has also spent $200,000 since last year to lobby the city. Between April 2015 and February 2016, the company paid Scott Levenson, president of The Advance Group, $100,000 to lobby the Department of Buildings for permits for a project at 110 Wall Street, The Real Deal reported. The permits were awarded in July. This year, the company paid $100,000 to consulting firm Global Strategy Group to lobby the Mayor’s office on “procurement,” although it’s unclear what that entails. The New York Daily News reported that soon after, on January 6, GSG’s Jon Silvan spoke over the phone with Deputy Mayor Alicia Glen and pitched “future projects” in the city. Hankin’s bundle came in a few days after that conversation.

Neumann and his wife also contributed $25,000 each and McKelvey contributed $50,000 to Governor Andrew Cuomo’s 2018 campaign, on January 11, according to state Board of Elections filings.