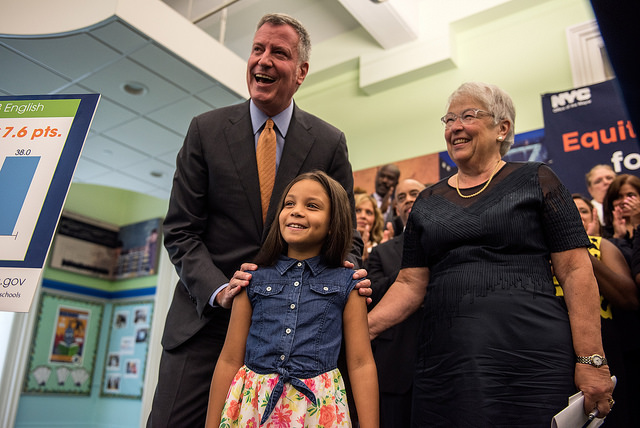 In 2007, New York City administered its first comprehensive survey on school satisfaction levels among students, parents, and teachers in the city’s vast public school system. That year, the Department of Education received just under 600,000 responses. In 2016, with the survey in its tenth year, the number of responses totaled over 1 million for the first time. It was also the first year that parents and teachers involved in the de Blasio administration’s new “Pre-K for All” program were included among the survey’s respondents.

The results of the survey are usually quite positive and this year was no exception, leading the DOE to celebrate the responses as validation of programming gone right. In the DOE’s press release announcing the 2016 survey results, Schools Chancellor Carmen Fariña said, “As we work towards equity and excellence in every public school across the City, parents are our partners, and it’s great to see over one million New Yorkers – including a record number of parents – sharing their input. Together, we’ll continue the progress we’ve made and make New York City the best urban school district in the nation.”

While the DOE survey suggests students, parents, and teachers are highly satisfied with New York City public schools, a recent Quinnipiac poll conducted suggests that not all New Yorkers agree. According to the poll, 60 percent of New Yorkers are dissatisfied with New York City public schools while 25 percent are satisfied. (The remaining 15% answered that they don’t know.) A higher percentage of respondents said they prefer privately-run public charter schools to traditional public schools.

According the Department of Education website, the purpose of the survey is to aid schools in identifying aspects of its learning environment that need improvement and ensure that schools continue to foster elements of their learning environments that are satisfactory to students, parents, and teachers alike. While the survey provides the DOE with at least some helpful data, there are questions about its usefulness, format, and cost.

There are three different versions of the NYC School Survey -- one each for students, parents, and teachers. This year, 81 percent of teachers, 83 percent of students, and 51 percent of parents in community schools across the city responded to the survey. The response rates increased by one percentage point from the 2015 survey for both students and parents and remained the same for teachers.

Parents’ overall satisfaction with their children’s schools continued to be extremely high. When asked “How satisfied” they were with “The education my child has received this year,” 95 percent of those who took the survey responding that they are “very satisfied” or “satisfied.” That figure has remained constant at 95 percent since 2013. Students recorded high levels of satisfaction with their schools as well, with 80 percent of student respondents recording that they either “strongly agree” or “agree” with the statement, “My school offers a wide enough variety of programs, classes and activities to keep me interested in school.” Additionally, 80 percent of students felt supported by teachers in their preparations for their post-graduation plans.

Other specific questions relate to school environment (e.g. school cleanliness, personal safety while at school, bullying among classmates); the quality of academic instruction; level of support among teachers and school leadership; and ease of communication among all parties. While some questions appear on all three surveys with slight variations, some questions are particular to each group. For example, only parents are asked the question of what improvements they would like to see at their school (as in their child’s school).

Many survey questions ask respondents to note how much they agree with a series of statements. Other questions use a similar format but measure the frequency of a certain behavior or condition - for example, “How often do students in your class(es) work in small groups?” Some are formatted as multiple choice questions with specific responses to questions like, “Which improvements would you most like your schools to make?”

The cost of conducting the 2016 survey was approximately $1.85 million.

Elements of school quality are evaluated through the DOE’s Framework for Great Schools, a tool of analysis that looks at six aspects of a school’s learning environment -- rigorous instruction, supportive environment, collaborative teachers, effective school leadership, strong family and community ties, and trust -- to determine its ability to foster student achievement. The Framework for Great Schools was adopted in 2015, the 2016 schools survey reflects only the second year of results based on the new evaluation framework adopted by the DOE under Chancellor Farina.

Leonie Haimson, executive director of Class Size Matters, a nonprofit advocacy group that focuses on reducing class size in New York City schools, said that the Framework for Great Schools is a well-intentioned model, but she believes it is an ineffective tool in practice.

“The original concept, this Framework of Great Schools that came out of Chicago, was very useful…[it] came out of this study by Tony Bryk that looked at schools in Chicago, and he looked at which ones had strong Local School Councils and which ones did not, and the ones that had Local School Councils -- which really devolved a lot of decision-making to the school level and it included parents as the majority members -- had better results,” Haimson told Gotham Gazette in a phone interview.

“Now this administration has a lot of PR about parent involvement, but I can tell you that they have not empowered a School Leadership Team to the degree that they need to. School Leadership Teams -- unlike in Chicago -- do not have the power in New York City, don’t have any authority over principal selection or even really principal evaluation, and a lot of other things. They’re really disempowered.”

According to the DOE, research from the Chicago Consortium on School Research was one source used to formulate the Framework for Great Schools, but it was not the only source. And while the DOE’s Framework was created using research from outside sources, the DOE says that the final product is an analysis tool tailored specifically for the New York City school system.

Prior to the creation of the Framework for Great Schools the city school survey evaluated schools based on four elements of a school’s learning environment: academic expectations, communication, engagement, and safety and respect.

While the majority of the survey’s questions are designed to assess schools based on the six elements of the Framework for Great Schools, some questions are considered “informational.”

One informational question consistently posed to parents has garnered a largely consistent response since the survey’s creation. When parents are asked the question of what they would most like to see improved in their child’s school, “smaller class size” and “more enrichment programs” have been in or near the top two most wanted improvements almost every year that the survey has been given. Also featured at or near the top for many years are “more preparation for state tests” and “more hands-on learning.”

Despite consistently high satisfaction levels among parents with city schools overall, the fact that these improvements continue to be parents’ top requests year after year may be indicative of a lack of meaningful action taken on these requests by school leadership.

David Bloomfield, professor of education at Brooklyn College and the CUNY Graduate Center, questions the usefulness of survey questions posed to parents about improvements, such as smaller class sizes, given the constraints with which the Department of Education operates.

“The DOE is clearly not flexible about class size arrangements, which it makes because of the size of schools, the size of classrooms, the size of the budget. It’s a persistent problem that doesn’t change just because parents put it high on their list of priorities in a survey, so what use is that?” Bloomfield said in a phone interview with Gotham Gazette.

While the survey serves to evaluate satisfaction by key stakeholders with individual schools and identify a school’s problem areas, the larger system that directly influences individual schools is left out of the equation. The questions posed to students, parents, and teachers on the surveys are related almost exclusively to the individual school and the members and leadership of that individual school. Only two questions asked of parents and seven questions asked of teachers were directly related to the wider New York City school system, run out of the Department of Education, under the Mayor, and there were no questions pertaining to statewide policies such as Common Core Learning Standards or teacher performance evaluations.

Haimson believes that while general questions about parent and teacher satisfaction with broader government and education policy aren’t necessary, asking specific questions on education issues that directly affect students, parents, and teachers would be useful.

“I think is an important question when so much of what’s happening during the school day are driven by these federal or state mandates,” said Haimson.

From 2012 to 2014, the survey given to teachers included questions on the implementation of the Common Core and state assessments, but starting in 2015, Common Core and assessment questions were no longer included. Additionally, on the 2013 and 2014 surveys, parents were asked to record how much they agreed with the statement, “My child’s school...helps me understand what the Common Core learning standards mean for my child…” The 2015 and 2016 parent surveys did not include this question.

According to the DOE, the questions about the Common Core that appeared on previous surveys were included to evaluate the implementation of the then new instruction method. On more recent surveys, there have been questions pertaining to Common Core instruction, though the specific term “Common Core” has not been included.

While certain questions have been changed or taken out of the survey in recent years, a new series of questions was added in 2016. Parents and teachers involved with Mayor de Blasio’s “Pre-K for All” program were given surveys this year for the first time in the survey’s history (the students are four years old and not given surveys, which only go to students in grades 6 through 12). While the rates of parent satisfaction on every aspect of the pre-K program exceeded 90 percent, the response rate for both parents and teachers was low, at 47 percent and 69 percent, respectively.

“The NYC School Survey is a critical, research-based tool for getting the feedback of over one million parents, teachers, and students, and using that feedback to improve our schools. This year’s results recognize the hard work and dedication of school leaders and teachers, and will guide schools as they continue to make progress and work towards equity and excellence,” said the DOE in a statement made available to Gotham Gazette via email.

High marks from parents on pre-K and the high marks recorded across all public schools in New York City may reflect general satisfaction, but Professor Bloomfield doesn’t believe they confirm with any certainty that the survey is a valuable tool for New Yorkers.

“I think there’s a bigger question as to whether it’s worth all the money, time, and effort that it takes to put out the survey as relative to its worth,” Bloomfield said. “It becomes a very hard thing and a PR problem for any mayor or chancellor who would cut back on the survey, but is it really worth it?”