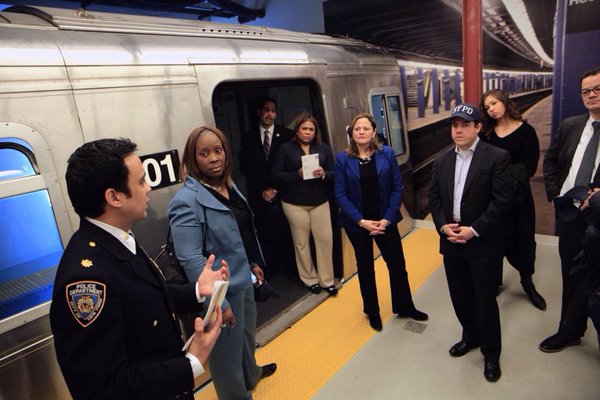 A bill introduced by City Council Member Dan Garodnick to require the NYPD to publish its patrol guide online will be heard for the first time by the City Council’s Committee on Public Safety next week. The hearing, set for Thursday, September 15, follows shortly on the recent controversy over the Right to Know Act, a package of police reform legislation that Council Speaker Melissa Mark-Viverito put on the backburner in favor of related changes the NYPD agreed to implement through training and its patrol guide.

While Mark-Viverito has insisted the Right to Know Act bills are not off the table permanently and some call for Council members to push for their passage without her agreement to schedule a vote, Garodnick’s patrol guide bill is moving forward, and appears to have widespread support. After being heard in committee the bill can be amended and then voted through committee and the full Council - if it has enough support.

While police and government reform advocates alike call for more transparency around police officer conduct, publishing the patrol guide online may be one fairly simple measure that most, if not all, stakeholders can agree on.

The NYPD patrol guide lays out procedures and codes of conduct for police officers, including protocols for interactions with the public. Free but outdated versions of the guide are available online. In 2014, Shawn Musgrave, a reporter for MuckRock, obtained a copy through a Freedom of Information Law request, albeit after significant back and forth with the department. (Local writer and political organizer Keegan Stephan also posted the same version on his blog in April this year.) The current guide can also apparently be purchased online, at this officer uniform store and through this publisher, for between $55 and $70. Garodnick’s bill, introduced in March of 2015, would require the police department to make the full patrol guide available on their website free of cost, but would exclude portions on non-routine investigative techniques, confidential information or any information that would compromise an officer’s safety or that of the public. The police department would have to update the guide each time an amendment is made, clearly noting the changes along with their effective dates. The bill would go into effect 90 days after it is signed into law.

“The Police Commissioner supports posting the Patrol Guide on the Department's website,” said an NYPD spokesperson in a statement to Gotham Gazette, also confirming that department personnel will testify at the Sept. 15 hearing. (Coincidentally, Bratton’s last day at the NYPD is set for Sept. 16; he announced his retirement earlier this summer. Bratton has often clashed with the Council on police reform and oversight.)

Garodnick called his bill an “important transparency initiative” for the police. “This bill will help build the trust that some feel is lacking between the police and communities,” he said in a phone interview with Gotham Gazette. “It will also add accountability because New Yorkers will be able to know what to expect in interactions with the police and be better equipped to speak up” if there are any violations, he said.

It will also help the police department, Garodnick said, in ensuring that the public understands the rules. Mark-Viverito appears to be backing the bill. “This is part of our continued push to reform the NYPD to make it more transparent,” said Eric Koch, spokesperson for the speaker, in a statement.

Publishing the patrol guide is unlikely to quiet those calling for passage of the Right to Know Act, but it would bring more light to the new directives being given to officers for carrying out street stops, among other updates that have recently been agreed upon, such as the use of civil summonses instead of criminal summonses or arrests for a variety of non-violent, low-level offenses.

Incoming Police Commissioner James O’Neill, who will take over the department when Bratton departs, has said he is fully supportive of the Right to Know compromise.

The legislation in the Right to Know Act would require police officers to identify themselves by name, rank, and command if a street stop does not result in an arrest and requires an officer to obtain consent to search a civilian, a vehicle or house and inform a civilian of their right to refuse consent for a search if there is no probable cause. The bills were strongly opposed by Bratton on behalf of the NYPD, and thus the de Blasio administration. Mark-Viverito did not agree to schedule a vote on the bills, which had a committee hearing on June 29, 2015.

Instead, Mark-Viverito struck an administrative compromise with Bratton to implement aspects of the two bills through department training and the patrol guide. In a recent interview with Gotham Gazette, Mark-Viverito defended the compromise as progress, explaining that the Council had moved the NYPD from its strong opposition toward middle ground. Police reform advocates have criticized the agreement, pointing out that the NYPD is particularly opaque when it comes to its patrol guide.

“Editing training and patrol guide language will never deliver real change on the ground to end the police abuses that the Right to Know Act would help end, and the Speaker’s deal to gut and seek delay of the reforms certainly will not,” said Anthonine Pierre, lead community organizer for Brooklyn Movement Center, in a statement.

Brooklyn Movement Center is a part of Communities United for Police Reform, a coalition. “Transparency is needed on a range of fronts with the NYPD and Council Member Garodnick’s efforts to advance that regarding the patrol guide are positive, but it’s troubling that this transparency bill was not provided with a hearing until public scrutiny of Speaker Mark-Viverito’s deal that lacks transparency and deficiently relies on the patrol guide,” Pierre said. There is no evidence that the hearing comes as a result of the Right to Know Act compromise.

Amid the criticism of the deal, Politico New York recently reported that the NYPD was speeding up its estimated timeline for implementing the compromise by six months. According to Politico, NYPD sergeants were to receive training on updated search protocols as early as August 26 and would relay that to officers in the next few weeks. A second “reinforcement” training was planned for September, with the department expecting the patrol guide to be updated by October 15.

At a recent news conference on the steps of City Hall, government reform group Citizens Union pointed to the lack of transparency with the patrol guide. The group released a set of proposals to improve police accountability; among them, making the patrol guide freely accessible to the public.

“I’m surprised that it even takes a law,” said Council Member Rory Lancman, a vocal proponent of police reform and a co-sponsor of the bill. “It seems obvious that it should be available to the public except in rare circumstances where that compromises public safety.”

Lancman said making the patrol guide public has been an issue for years, and not just since the Right to Know controversy. “One would have thought that de Blasio, on taking office, would have published it without needing to be forced through legislation three years into his term, to do so.”

Lancman expects the hearing to go smoothly and that the bill will receive overwhelming support. “There’s no reason the NYPD shouldn’t be transparent in this way,” he said.